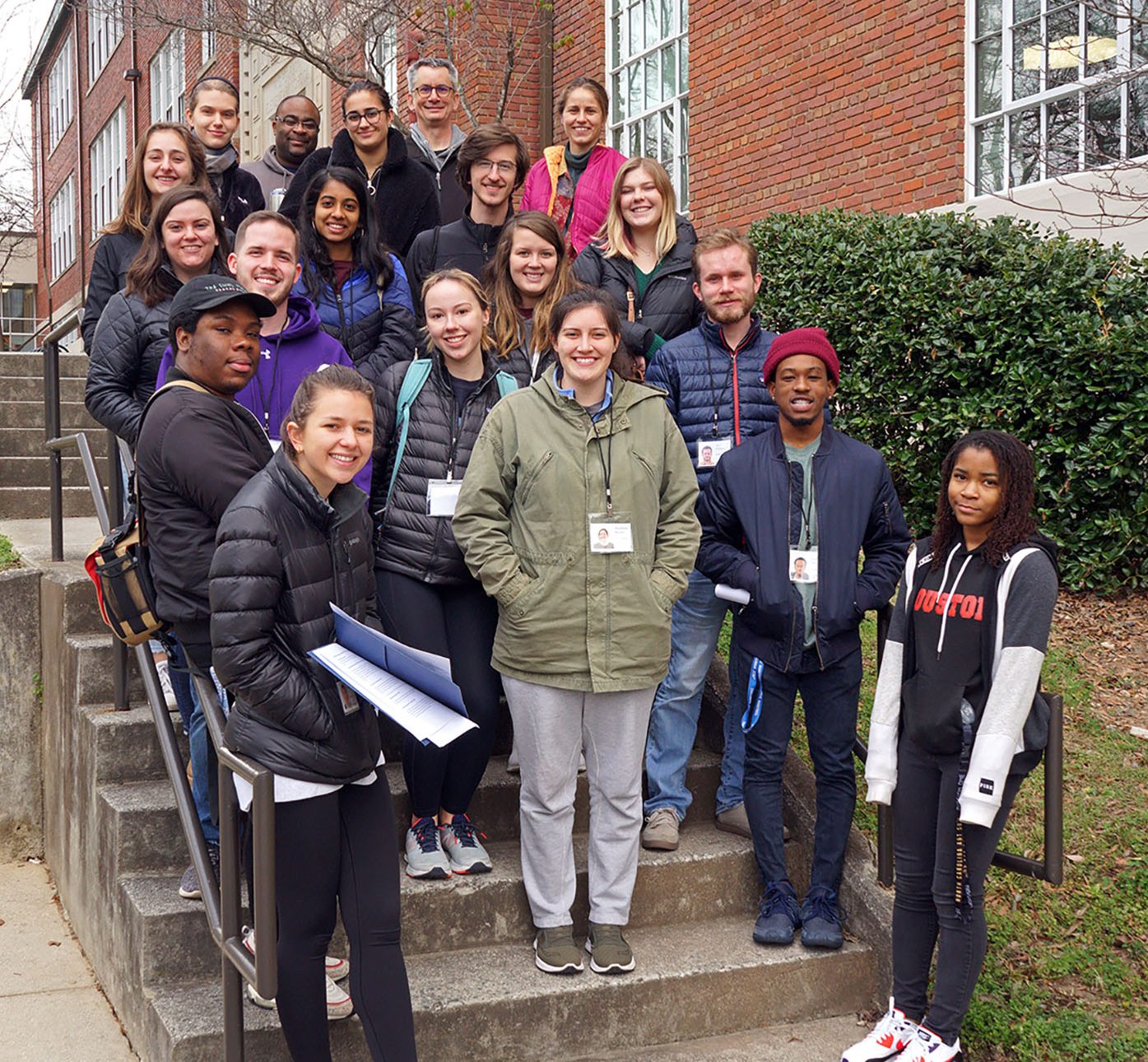 The staff of the Durham VOICE poses for a group portrait in front of the W.G. Pearson Center, home of Partners for Youth Opportunity. (Staff photo by Jock Lauterer)

A proper news story must satisfy a little formula we newsies call “the Five Ws.”  The what, who, where, why, when…and sometimes how.

WHAT: With this new year, the Durham VOICE turns 10. And, as any experienced journalist knows, newspaper years should be measured in dog years.

No matter how you measure time, this marker anniversary could not have been reached without the aid and support of a holy host of civic angels.

Our specs: We are a bi-weekly online lab community media site and a monthly print newspaper with a circulation of 2,000 distributed to 60 drop spots throughout Northeast Central Durham during the school year.

WHERE: We are dedicated to reporting on the “other Durham,” that part of town bifurcated by the Durham Freeway, left out on the hipster, foodie tours — the old part of Durham struggling to come to terms with the ambivalence of gentrification. Call it Hayti, call it the five historic neighborhoods or Northeast Central Durham.  But call it the Community.

WHEN: With the aid of several seed grants and the support of the School of Journalism and Media and the Daily Tar Heel, we launched in print, February 2010.

WHY: Our mission is help build up this community with relentlessly local reportage of the good things and good people who make ‘’our Durham” unique and special. We are there to help our people find their voices, so to speak, and help them tell their stories in an authentic, honest and empathetic narrative. Additionally, the VOICE is dedicated to mentoring the urban youth — high school journalists who come to realize the power of the written word and published photograph and how that can change their world for the better. Our tagline says it simply: “Our Times, Our Community, Our Voices.” We believe that such compelling local reporting can lead to civic engagement, the lynchpin of democracy.

WHO: The Durham VOICE is a strategic partnership between the Hussman School of Journalism and Media at UNC-Chapel Hill, the communications department at N.C. Central University, and the youth development NGO, Partners for Youth Opportunity. Our other community partners include the City of Durham’s Neighborhood Improvement Services, SEEDS, Durham Tech, Hilliside High School, Antioch Baptist Church, and the East Durham Children’s Initiative.

The brainchild of Associate Professor Mai Nguyen of the UNC Dept. of City and Regional Planning, the VOICE grew out of the UNC Center for Public Service’s inaugural Faculty Engaged Scholar program, directed by Lynn Blanchard.

Taking my cue from Prof. Nguyen, I launched the VOICE in 2008-2009, in partnership with NCCU professors D.P. dePyssler and Lisa Paulin; as well as the vital input of the late Earl Phillips and his assistant, Melva Henry, at Neighborhood Improvement Services and the African American community, led by the NECD Leadership Council.

In the J-School, faculty colleagues Joe Cabosky and Eric Ferkenhoff have made significant contributions, while the VOICE is forever indebted to Assoc. Professor Andy Bechtel and his advanced copyediting class, with whom we work in tandem, for their attention to detail.

How do we do it? With the generosity of patrons — most recently angel donors Anne and Doug Petersen of Michigan, who this fall secured a 2:1 matching grant from the W.K. Kellogg foundation,  which is currently supporting our printing. Earlier donations and gifts of printing came from publishers and brothers Walter and Lockwood Phillips of the Carteret County News-Times of Morehead City, Capital Broadcasting Co., The Z. Smith Reynolds Foundation and the Daily Tar Heel.  We are forever indebted to them for their generosity.

So, how is the VOICE going to get to its 20th anniversary?

That’s a big question — but I can tell you this, it will be with the help of a host of angels.

To the best of my knowledge, the VOICE is unique in the entire nation: the only collegiate lab newspaper published for an inner-city neighborhood as a strategic partnership between the state’s historic flagship university and the local HBCU.

Long live the Durham VOICE. And thank you for your support and readership.