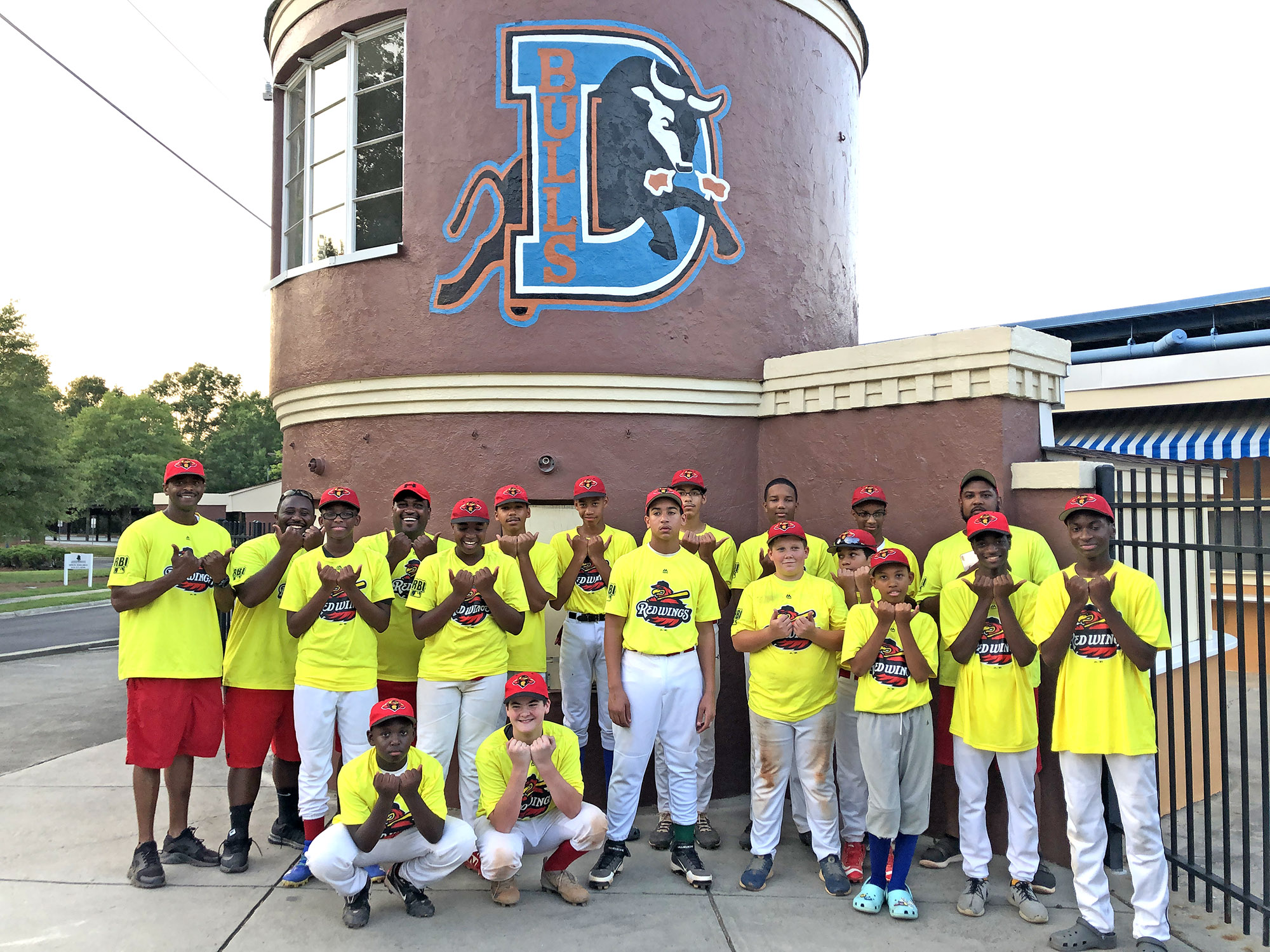 The DPAL baseball team’s final game of the 2019 season marked the program’s first year playing in the RBI Longball League, a non-profit that promotes baseball for inner-city youth. Led by coaches Officer Daye and Officer Trice. (Photo courtesy of DPAL)

Northeast Central Durham is no stranger to interactions with law enforcement — but a program that connects youth with police through athletics is attempting to reduce juvenile crime and foster positive relationships between the community and officers.

Butler said in addition to herself, there are four full-time police officers committed to the program and about 10 non-sworn personnel who also work with DPAL.

“We really work to promote positive attitudes, teamwork, overcoming challenges and good citizenship amongst the youth in Durham,” Butler said.

What makes DPAL more than just another athletic camp is that youth and families interact with police as mentors, not just authorities. Butler’s reasoning behind the importance of these interactions is simple:

“Because relationships are important. And if youth and kids grow up and experience how the world works and how it’s structured — if they have an understanding, if they have a relationship with the adults in the community who are building that world for them — they’re just going to adapt better.”

Butler said police-community relationships are not just about preventing crime, but also familiarizing citizens with basic encounters they might have with law enforcement, like when passing an officer on streets and highways or being pulled over.

DPAL by the numbers

As of January 2020, Butler said 56 families registered for programs with DPAL, though DPAL serves on average 500 to 600 youth a year through its combined outreach efforts.

She said DPAL is free for all participants ages 5 to 18. The program purchases equipment, uniforms and occasionally meals for youth.

According to DPAL’s website, youth can choose from different programs offered year-round that run after school, during teacher workdays and summer break. Next month, DPAL is hosting two camps: one for basketball on March 11 and another for soccer on March 27.

The basketball came will be at Edison Johnson Recreation Center on 500 W. Murray Ave. Drop-off for the soccer camp will be at Durham Police Headquarters on 602 E. Main St., but DPAL will then transport youth to Duke University to meet the men’s soccer team.

Reina Esperanza Acosta, 48, has one son enrolled in DPAL.

She shared her DPAL experience with the VOICE through the help of a translator via email.

As a DPAL parent, Acosta said that language barriers are bound to exist, but she has been able to communicate with DPAL personnel when needed via her son or a bilingual staff member.

She said that positive community-police interactions help Spanish-speaking residents learn about what members of law enforcement do. Many come to the U.S. with memories of very harsh experiences with police in their home country and tend to reflect those worries onto local police.

But she said programs like DPAL eliminate those stereotypes.

Acosta said the relationship works both ways. She added that when police interact with the Spanish-speaking community, they also gain a better understanding of the population and how to work with them.

Jeff Bakalchuck’s son, Josiah, a third grader at Club Boulevard Elementary, has been in the DPAL program since last spring.

“The fact that the kids see the police officers in a positive and supportive role, I think is really important in building that trust on both sides,” Bakalchuck said.

Bakalchuck said he always tried to reinforce the idea that police officers are meant to help. Bakalchuck, a former New Yorker, remembers when his son wore a New York Police Department shirt on the anniversary of Sept. 11. As his son was walking home from school, a policeman stopped him to comment on the shirt.

While Bakalchuck said that moment was illustrative of how police-community relationships should be, he recognized not everyone has the same experience. But that’s what DPAL aims to improve.

Marlow Campbell, who manages club partnerships and development for NCFC, said that the partnership with DPAL has been a very positive experience.

“We’re a youth soccer organization, and so we’re here to encourage kids, no matter where they come from or what their background is, or economic status,” Campbell said. “We just want to be able to help kids.”

To register for spring camps visit the DPAL website. For Spanish-speaking parents, bilingual officers can assist with registration.

To find volunteer opportunities, check out the page here.