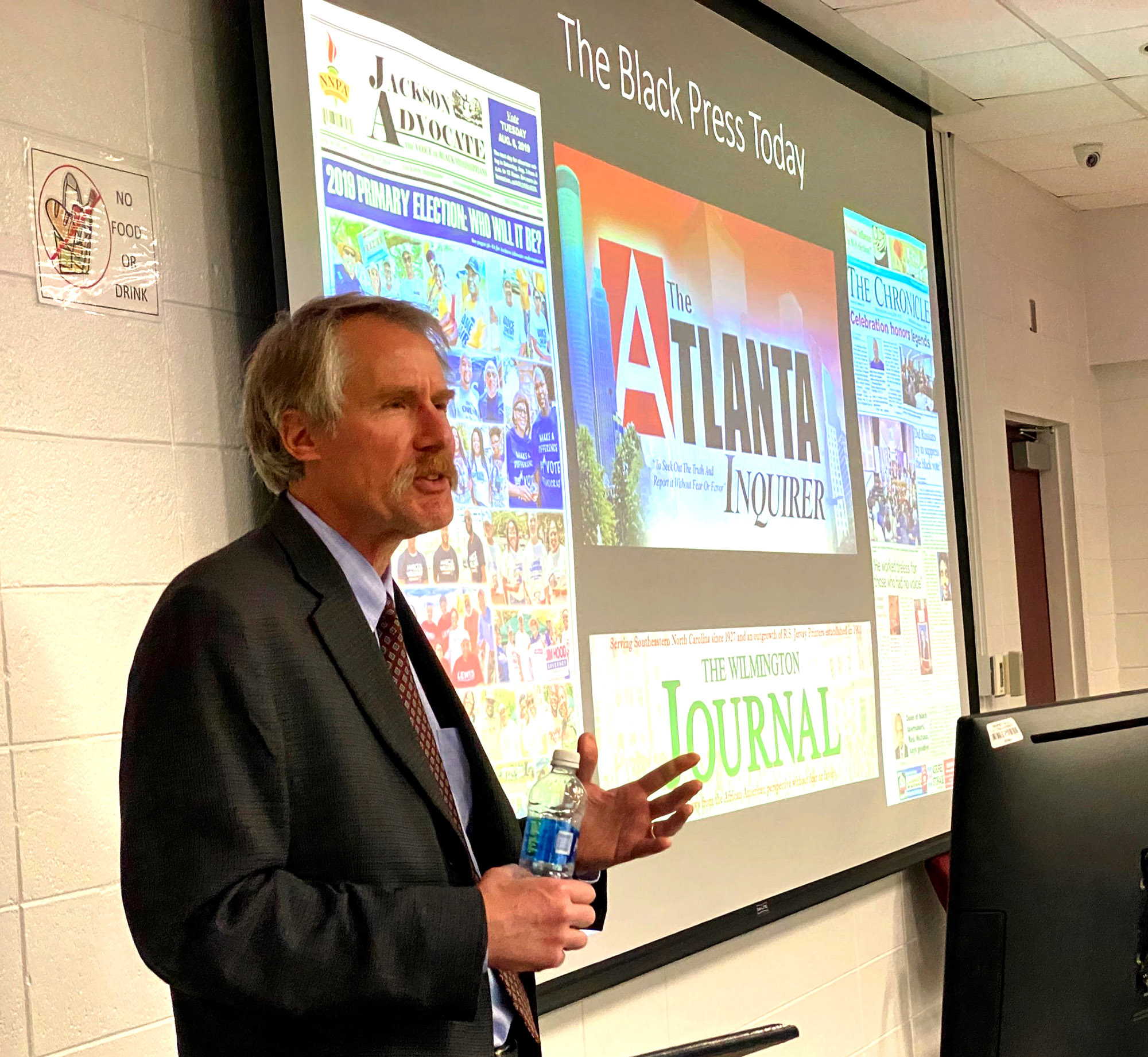 Dr. Jerry Gershenhorn speaks to a room of students, faculty and Durham residents during his lecture, “The Power of the Press: Southern Black Journalists and the 20th Century Freedom Struggle,” in Hubbard-Totten Building Auditorium at NCCU on Tuesday afternoon. (Staff photo by Victor Hensley)

While many classrooms across the country tell the stories of often-celebrated black figures and events during Black History Month, one professor decided to take a different route by shining a light on an underrepresented industry.

As part of his world societies course Tuesday afternoon, Terry Mosley, a professor in the department of history at North Carolina Central University, brought in Dr. Jerry Gershenhorn, the Julius L. Chambers professor of history at NCCU, to give a guest lecture titled “The Power of the Press: Southern Black Journalists and the 20th Century Freedom Struggle.”

“Twice during the semester, [my students] are required to attend an outside lecture and report on it,” Mosley said. “It can be anything from quilt making, to beehives, to microeconomics. That encourages them to take advantage of all the great minds and great people either coming to the campus or are already here.”

For Mosley’s class, this counted as one of their outside lectures—as long as they chose to report on it.

Gershenhorn has taught at N.C. Central for over 25 years; wrote the book, “Louis Austin and The Carolina Times: A Life in the Long Black Freedom Struggle,” that was published in 2018; and has researched the black press in the American South for many years.

“The idea was to look at a larger piece of America and focus on the South because, as I mentioned in my talk, the Southern black press has had less focus,” Gershenhorn said.

The talk, which was open to the public along with Mosley’s students, was an hour-long dive into notable figures involved in the Southern black press and included stories of violence, division and perseverance.

Among the topics discussed by Gershenhorn was the complicated story of Percy Greene. He was the black editor of the Jackson Advocate in Mississippi from 1939 to 1976, who turned out to be a paid informant for the Mississippi Sovereignty Commission—a commission established by the Mississippi Legislature to act as a watchdog for anyone that threatened “the southern state’s racist way of life,” according to Timeline’s Nina Renata Aron.

During the Civil Rights Movement, Greene was a controversial topic and caused a major rift within the black journalist community.

“There’s always going to be debates within communities. There were absolutely differences about tactics, strategies, short-term goals, stuff like that,” Gershenhorn said. “That’s one of the stories that’s somewhat disheartening but kind of amazing to me.”

The emphasis on violence against the Southern black press was evident during Gershenhorn’s lecture, as he told stories of journalists who were beaten in the streets, threatened with lynching, harassed by having their property destroyed and jailed after being charged with questionable offenses.

One example, in particular, is the story of L. Alex Wilson. He was a black reporter for the Tri-State Defender in Tennessee who was famously followed by a mob and beaten while he was attempting to cover the story of the Little Rock Nine in Little Rock, Arkansas, in September 1957.

Wilson showed perseverance by continuing to get up and walk down the street even after taking blows to his body. Despite taking a fairly bad beating, Wilson managed to make it to his hotel and write up an article on what happened, later published in the Tri-State Defender. He died a couple of years later due to complications he suffered from his injuries that day.

“I remember seeing him in the documentary ‘13th,’ by Ava DuVernay, and they showed footage of him being beat, but I never knew who that man was,” said Dorrell Briscoe, the pastor at The Six:Eight Church in Durham. “Our church, for Black History Month, is highlighting activists and telling their stories, so we’re going to be telling his story because of this.”

Gershenhorn reminded everyone at the end of his lecture that the Southern black press did not die with the Jim Crow era in America. It is very much alive today.

According to Gershenhorn, there are around 150 black-owned newspapers in the United States today, with nine of those located in North Carolina—including The Carolina Times, Durham’s longstanding black newspaper.

“When I’ve done talks, I meet people who have been reading (The Carolina Times) for many decades. I think people are still interested,” Gershenhorn said. “It still has a place to play because, sometimes, things still aren’t reported in the white-dominated press. It’s different, certainly, than it was then, but there’s still a role for small community papers, black or white.”