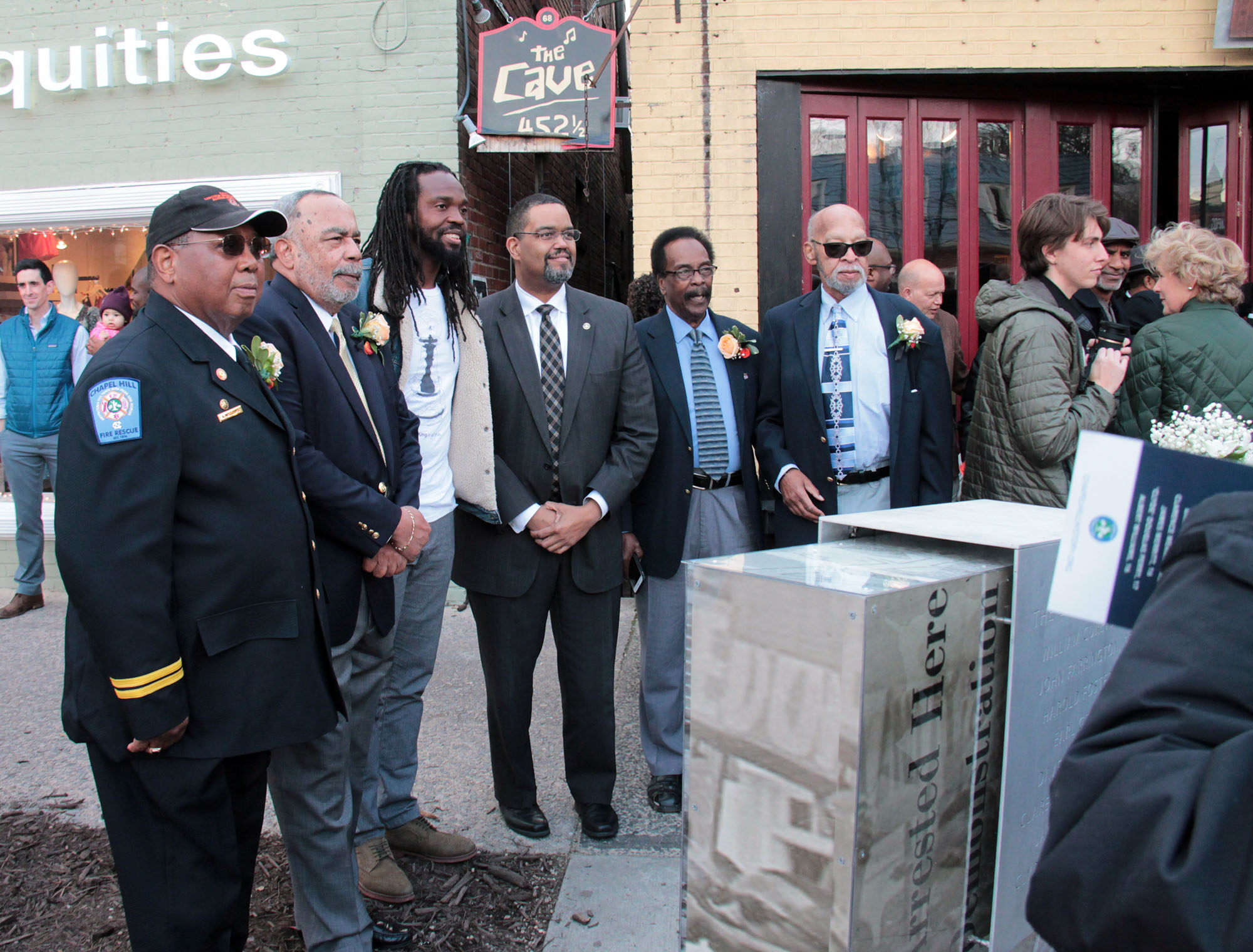 Durham artist Stephen Hayes poses with the living members of the Chapel Hill Nine behind a marker he created to commemorate them. (photo by Jock Lauterer)

Crouching with a power tool in hand, Durham artist Stephen Hayes pressed chicken wire over an aluminum base and drilled it into place. Soon the structure was covered in smooth slate, and the acrylic top covered in a collage of old news clippings and photographs was placed on top.

This marker now sits permanently outside the West End Wine Bar on 450 W Franklin St. in Chapel Hill to remind passersby of an event that changed the college town forever and to commemorate those who ignited the change.

On Feb. 28, 1960, nine students from Chapel Hill’s all-black Lincoln High School marched into the Colonial Drug Store and sat down in booths. This was the first sit-in and civil rights action in Chapel Hill. At the time, owner John Carswell required black customers to stand, a rule enforced by all the businesses in Chapel Hill.

Sixty years ago, the boys sat outside the storefront while a police officer grilled them, not realizing they had just ignited the spark for equal rights activism in Chapel Hill or that they would go down in history as the Chapel Hill Nine.

In the years that followed, sit-ins and equal rights marches became commonplace, and both black and white students and Chapel Hill citizens participated.

The Town hired Alicia Hylton-Daniel, owner of Durham-based Hylton Daniel design + construction, for the project to commemorate the Chapel Hill Nine. Hylton-Daniel hired Hayes to create the marker around six months ago.  Hayes said this type of project was new for him, because he had never created a piece for someone else.

“It was amazing to be a part of something like that, because I didn’t know anything about the whole event,” Hayes said. “To have that skill to relay that message and that instance they created that’s allowed me to be able to walk into other stores openly was an amazing moment.”

A natural born artist, Hayes recalled the first time his creative interest was piqued in the first grade. His toy remote control car broke, so his older brother took it apart and reconnected the battery to fix it.

“From then on, I was just making and breaking a lot of toys and finding different objects to make things out of,” Hayes said.

Hayes graduated from North Carolina Central University with a ceramics portfolio and a bachelor’s degree in visual communication. He had a residency at New York State College of Ceramics at Alfred University, and he earned his master’s degree in sculpture from Savannah College of Art and Design.

“At SCAD, I was one of the African American students in my department — I was at the point where I felt like they were trying to push me to do stuff about black people and being black,” Hayes said. “Initially, I didn’t want to make any work about me being black or anything — I liked to make abstract art and stuff that just wowed my audience.”

His feature project for SCAD was “Cash Crop!”, a sculpture installation fueled by the theme of the transport of bodies as well as how people are manipulated to produce different outcomes.

The individual statues are chained to a palette, which represents how people outsource their goods to different places today.  The project is meant to symbolize how the transport of people has evolved.

“A lot of my work deals with capitalism, consumerism and brainwashing and the idea of the black body and how the black body is being represented today,” Hayes said.

He added that he draws inspiration from personal experience and how he has been treated or viewed as a black male.

Hayes also teaches art classes at Duke University.  He loves to help the next generation of artists work toward their goals and encourages them to focus on their individual work.

“Don’t worry about what everyone else is doing — create your own voice, make your own lane and continue building your work,” Hayes said.

Danita Mason-Hogans, the project coordinator for critical oral histories at Duke University and daughter of a member of the Chapel Hill Nine, said the marker took her breath away.

She was the one who first came to Chapel Hill Mayor Pam Hemminger expressing her desire for the Chapel Hill Nine to be honored.

“To me, the marker symbolizes a beginning,” Mason-Hogans said. “ It is the beginning of an era where there is a partnership with local people who are determined to tell their own history and not have it told for them.”