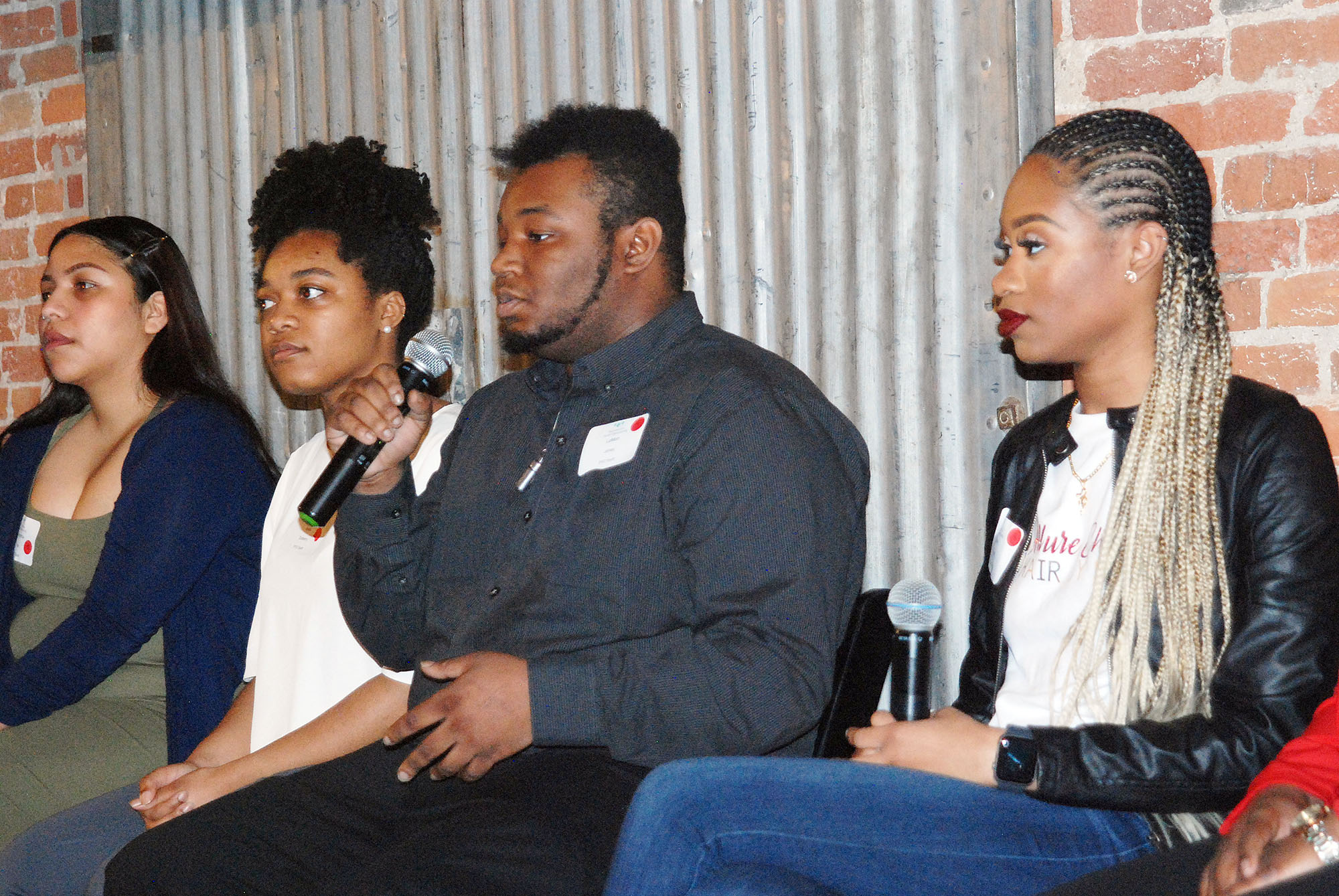 LaMon Jones (second from the right), a PYO participant and Durham native, addresses the crowd as a panelist at the most recent annual PYO Rise and Shine Breakfast at the ATC. Photo by Khadijah McFadden.

He grew up around his family’s stone masonry business in Durham. Now, he wants to build on that foundation.

Jones said he was able to get his job at ECWA through Partners for Youth Opportunity, a youth development program that helps connect Durham teens with education and job opportunities.

“I realistically don’t know where I’d be without them,” Jones said.

During his time with PYO, Jones was the teen editor of the Durham VOICE. He went on a five-day work trip to Ocracoke Island to write for the Ocracoke Observer in August 2016. But his real passion is something quite different: stone masonry.

“Eventually, I want to start my own masonry business,” Jones said.

Members of Jones’ family have worked as masons in Chapel Hill and Durham for more than 100 years. Jones said the Chapel Hill welcome sign on NC Highway 15-501 was designed and built by his grandfather. He said he’s the only grandchild who knows how to lay stone and brick.

“I wanted to be able to continue that tradition and be able to pass it down to my kids one day, have something to show for my efforts, put my mark on the world as one of the masons that have come in this long line of great masons,” Jones said.

Jones said his work with ECWA may be able to supplement his future work in stone masonry.

Jones’ responsibilities with ECWA include building rain gardens and cisterns to divert the flow of wastewater and rainwater into the soil or to store it and prevent runoff from causing pollution in local rivers.

“Instead of hitting the soil, it hits roofs and houses and driveways which brings stuff like oils and other unnatural things that then get sucked back into the groundwater,” Jones said.

Though Jones was planning a rain garden, he said he won’t be able to continue working on it because of the COVID-19 outbreak.

“Before this COVID-19 virus decided that it wanted to rear its ugly head, we were doing outreach with people who’ve already had rain gardens installed,” Jones said. “So far, from what I’ve seen, speaking to people, when they’ve been kept in good condition these rain gardens are very effective at keeping their property value up because you don’t have runoff causing erosion in the wrong places.”

Jones said that in some cases, a rain garden can prevent someone from having to redo their driveway because they divert the water that causes erosion and cracking.

“A lot of times I don’t think people understand that it could be something that they need,” Jones said. “They don’t really know that it’s a resource they have access to.”

Jones said he thinks his work with ECWA can help his community. Since Durham has grown so rapidly recently, Jones said, he feels it is important to carry out ECWA’s mission of dealing with the excess runoff and pollution that comes with urban development.

Jones said, “In my opinion, it has lost a tiny bit of its culture to everything that we have being built up right now — all this new stuff being put in and misplacing the identity Durham had before.”

A.J. O'Leary is a senior journalism major at UNC-CH from Chimney Rock. This spring he is serving as a staff writer/photographer with the Durham VOICE.