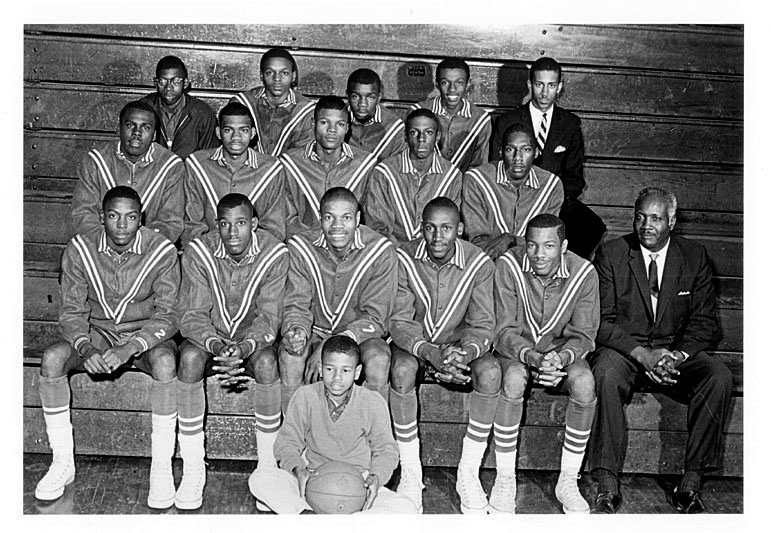 All of these teams have one thing in common: each is the greatest offensive team in its respective league’s history.

But before those teams came along, there was the 1965-66 Hillside High School Hornets, also known as the “Pony Express.”

“No one else was playing ball like we were in the mid-’60s. Nobody,” said Daniel McLaurin III, Hillside forward from 1964-66. “You just couldn’t stop us.”

McLaurin has written two books on his former basketball team. He published “32 Minutes of Greatness” in 2003, along with a special edition in 2009. McLaurin says his book’s first version had no breaks so it could give the reader a sense of what it was like to play against the Pony Express.

The 1964-65 season saw the Hornets eclipse 100 points seven times en route to an NCHSAC 4A state championship in what would be the school’s first — and last — state title. In the championship game against West Charlotte High School, Hillside came back from a 35-16 second-quarter deficit to win, 80-78, in overtime.

“People started leaving; they started walking out,” said McLaurin said of the title game. “When the second half came around, I think that’s when we really became the Pony Express.”

Hornets head coach Carl L. Easterling had waited years for a team to come along that was talented, fast and fit enough to run a game plan he had gleaned from the mind of Hall of Fame coach John McLendon, said McLaurin. It was built around a smothering press, ballhawk defense, and extraordinary quickness. Agility and stamina were crucial, hence the team’s horse-like nickname.

Hillside took that game plan to another stratosphere in the year following its championship run, the season in which the Pony Express wrote its legacy.

“He had us in such great shape that nobody could keep up with us, nobody could run with us,” McLaurin said. “Fourth quarter, we’re getting stronger, because, with everybody else, we ran their tongues out.”

In 1965-66, the Hornets put up what could be considered otherworldly statistics. The team hit the century mark 14 times, doubling their seven 100-point games from the year prior, a still-standing state record. Not only that, but the team averaged 108 points per game (105 including playoffs), another state record that still stands.

To put those numbers into perspective, the high-scoring Hornets came before the addition of the three-point line and the shot clock, and all of its 100-point games came without the benefit of overtime. Some of the team’s single-game point totals included 147, 139, 138 and 130, all in just 32 minutes.

The team would go on to lose by 30 points in their second-straight state championship game appearance against West Charlotte, but its mark had been left.

Its on-court dominance is only one part of the Pony Express’ story.

The 1960s featured racial segregation, the height of the Civil Rights Movement and the assassination of black leaders such as Medgar Evers, Malcolm X and Martin Luther King Jr.

Despite being the highest-scoring team in North Carolina history, not a single member of the Pony Express received a scholarship offer from a major Division I basketball program — or white school, as McLaurin calls them. Not John “The Goat” Bullock, not William “June” Harris, not George Outlaw, not Michael Hayes, not McLaurin.

“When you grow up as a black kid listening to grown-ups talk,” McLaurin said, “what they would always say is that a black kid or a black person has to be a hundred times or a thousand times better than a white person at whatever you’re doing — and even if you are, you still might not get any recognition at all.”

That lack of recognition extends to 2020, as McLaurin has worked for years to get the Pony Express recognized by both the North Carolina Sports Hall of Fame (NCSHOF) and the NCHSAA Hall of Fame. Neither has budged.

Both entities do not induct entire teams, but McLaurin has been vocal about them changing their bylaws. In 2011, the NCSHOF created “Great Moments in North Carolina Sports History” to recognize special moments, teams and events in the state’s past. The Pony Express has yet to be featured. In addition, no individual member of the Pony Express or Coach Easterling has been inducted.

Over five decades later, McLaurin is now 72 years old, living in Pasadena, California. There are nine surviving members of the team, including Bullock, Outlaw, Gregory Monroe, Larry Crawford, Hollis Vines, Alphonso Rigel, Harrison McMillan, Marshall Hill, and statistician Eric Moore. They are spread out across the country, but still remain in touch on occasion.

McLaurin plans to release a documentary on the Pony Express in the future, one much longer than the eight-minute feature ESPN did on the team in 2004. He’s dubbed himself a sports activist, making the recognition of his team a high priority.

“You can give us a little bit of this and a little bit of that, but you need to give it all to us. Because we earned it. And I shouldn’t be out here asking for it,” McLaurin said. “I’ve got a lot of fight left in me, young man.”