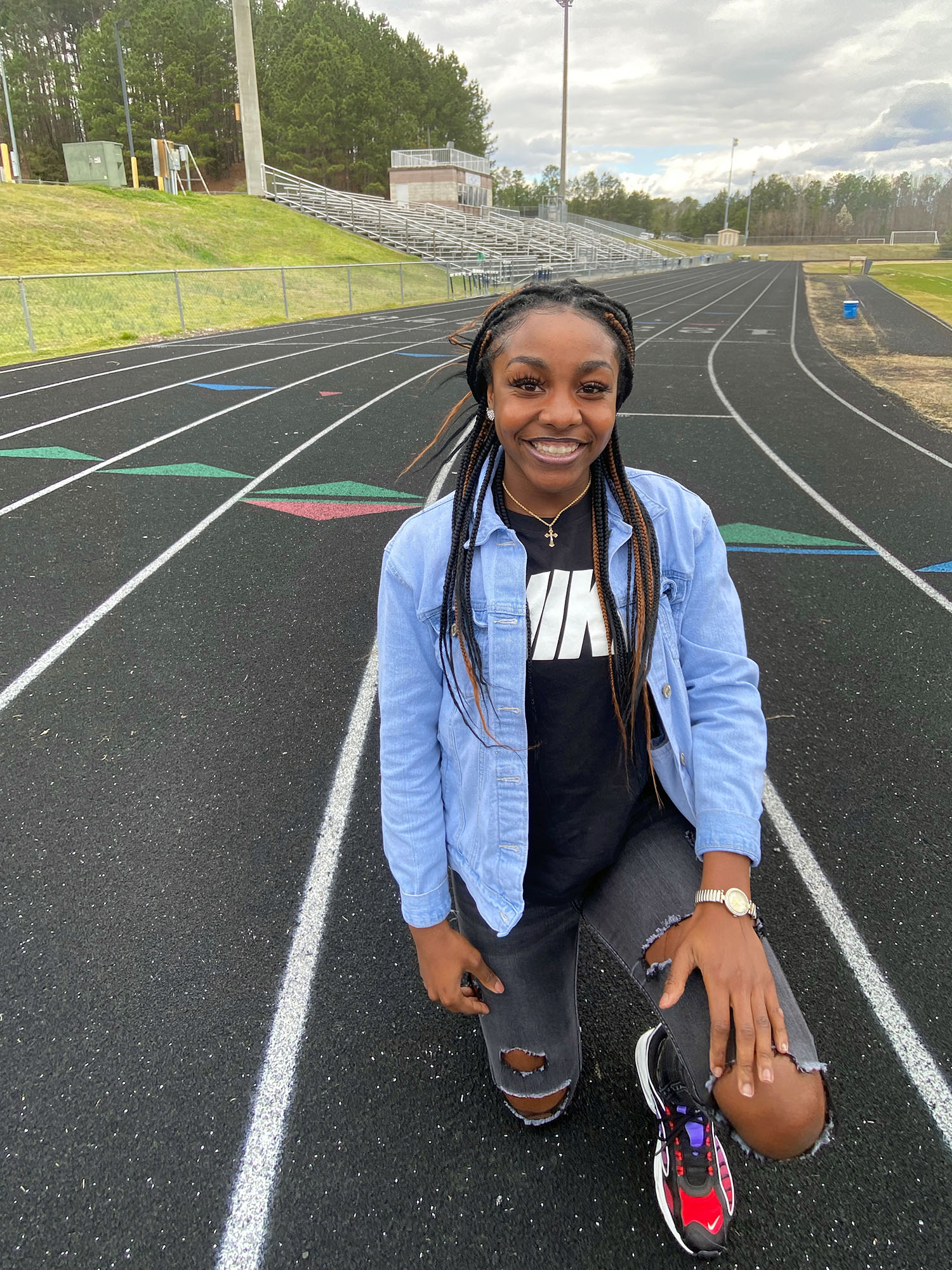 Hillside High School’s Alysia Johnson will be attending the University of South Carolina for track in the fall to hopefully run professionally one day. (Staff photo by Sophia Wilhelm)

Alysia Johnson is not the ordinary teenager who rolls out of bed to attend her last classes as a senior at Hillside High School. Instead, at 17 years old, she wakes up early before school to go to Planet Fitness. Then she goes to track practice after school. And, since that’s not enough, she does another workout at night.

Johnson is a track athlete who was offered more than 10 full-ride scholarships to universities and colleges across the country. In the fall, she will attend the University of South Carolina to run the 200-meter dash, the 400 and the 4×400 relay.

“My goal for high school was to have a personal record, state champion and, of course, a full-ride scholarship,” she said with determination seeping through her eyes.

James Carter, Johnson’s former coach at Hillside, said it was amazing to watch Johnson’s work ethic and progression over the years.

“It was like watching someone and thinking, ‘Is this for real?’” he said. “She was putting up times that normally freshmen don’t put up, and she was getting the attention of colleges then.”

Ever since Johnson turned 5 years old, she’s been running. Johnson’s mother, Crystal, said her daughter demonstrated the desire to train and eat healthy at a young age. She wanted to follow in the footsteps of her parents who were both athletes.

“She had the inner desire to be the best at whatever that was, and she always had that competitive edge about her, even in preschool,” Crystal Johnson said. “Her teacher would tell me, ‘Well, Mrs. Johnson, she outraced all the guys. You need to get her in racing.’”

When 13-year-old Johnson ran at regionals for recreational track, officials mistakenly told her she’d made it to the next round. She broke down after finding out the truth. But Johnson’s coach told her she was something special and needed to continue working hard to achieve her goals.

“Ever since that day, I was like, ‘OK, it doesn’t matter if you get first place. It doesn’t matter how people may view you. Me putting in the work is all that matters,”’ she said.

But it hasn’t always been easy for Johnson. A week before the indoor state championship her sophomore year, Johnson pulled her hamstring. Later on in her outdoor season, she pulled her other hamstring and had to sit out for the rest of the spring and summer season.

Johnson said that by trying to be the team’s hero, she overworked herself.

“For me to start running around 5 years old, I never had time to rest,” she said. “When you hear, ‘Alysia, what are you doing this weekend?’ I’m always running. For me to say, ‘I’m not running this year,’ that was really hard for me.”

Johnson’s injury caused her to see a new side of herself, which helped her and her teammates understand the importance of taking breaks. She returned her junior year, winning every state championship and beating all of her personal records.

Inspired by her own journey, Johnson wrote a 4,000-word essay on resilience, ambition and black student-athletes.

“It was personal for me because, at the same time, I went through that myself,” she said. “I had to be ambitious by having that work ethic, and I had to have that drive and dedication in my sport and in school.”

Johnson placed five hats from each school on the table, except for the University of South Carolina. She removed them one by one until only the Miami hat was left. Everyone cheered, shouting “Miami, Miami!”

“I pray that South Carolina treats me well and it’s going to be a good experience,” she said.

Crystal Johnson said she hopes her daughter will stay true to herself, enjoy her college experience and bring her dedicated work ethic to her new team. But most of all she hopes Johnson will get her college degree and then go run professionally.

“It was very delightful for me as a mom to see her gravitate to that world of track and field on a higher level,” Crystal said. “It was just a joy to be a part of this experience.”

Coach Carter said his advice to Johnson is that she trusts her coaches like she trusted him.

“My expectations on the next level of college is for her to be one of the best,” he said. “I believe she has the talent and drive to be an Olympian one day.”