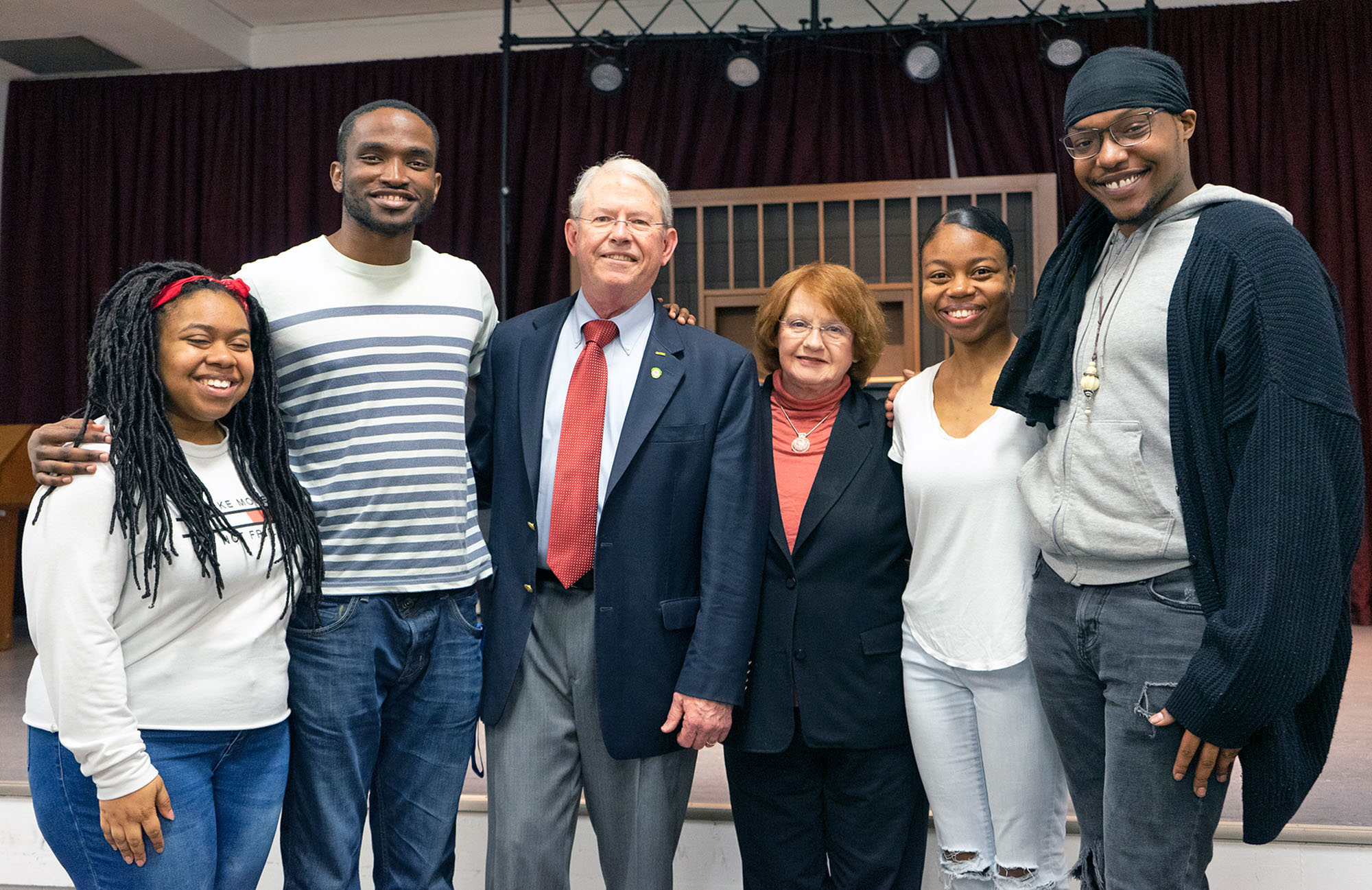 Andy and Warren Fuson (center) stand with NCCU students (left to right) Ariel Barker, Jay Attys, Imani Graham and Jawan Davidson. All four students attended the 2019 Barbershop Revival and learned about the African American roots. Ariel Barker said, “I kind of grew up not realizing that it was a part of our culture.” (Staff photo by Andrew Dundas.)

Editor’s Note: The Barbershop Revival, originally scheduled for March 27 and 28 at North Carolina Central University, has been postponed until fall.

While that image has been fairly accurate for much of barbershop’s history, Andy and Warren Fuson say barbershop began in the African American community.

“We discovered on many occasions that this is a lost history,” Andy Fuson said.

Andy Fuson is founder of the Barbershop Revival, an event that celebrates the little-known black roots of barbershop singing.

Along with her husband, Warren Fuson, director of the Barbershop Revival, the pair held the first event at North Carolina Central University last year.

Andy Fuson said, “We want people who attend to learn how much fun it is to learn the joy of singing, but we also want them to get the cultural perspective.”

Participants learn to sing in barbershop style and perform in front of an audience at the end of the event.

Imani Graham, a third-year student at NCCU, said the 2019 Barbershop Revival taught her a different approach to music.

Graham said, “Me being a voice major, it is definitely something I could apply to other pieces of music.”

Additionally, barbershop groups Halo and Forefront were set to instruct and perform, Andy Fuson said, as well as “this year’s gospel guests, The Gospel Jubilators.”

Beyond just the singing, Jawan Davidson, a second-year vocal jazz major and Ella Fitzgerald scholar at NCCU, said the visiting groups taught them a lot about history and culture that few people know about.

Warren Fuson said barbershop is not something you can get people interested in by telling them about it.

He said, “Doing it, experiencing it, is what makes people perk up and say, ‘Oh, that’s pretty cool.’”

The Barbershop Revival includes a panel discussion about the roots of barbershop, as well as a lecture from David Wright, scholar and historian from the Barbershop Harmony Society.

It was a lecture from Wright that inspired Andy and Warren Fuson to start the Barbershop Revival in the first place.

In an article in the Harmonizer magazine, the Barbershop Harmony Society’s bimonthly publication, Wright explained the history of Barbershop.

According to Wright, “In the late 1800s barbershop was pervasive in black culture.”

Many African Americans harmonized in barbershop style, according to Wright, on the street and in performances. The style thrived in New Orleans, where Louis Armstong recalled singing in his youth.

The roots of barbershop harmony began to disappear as recording companies tried to appeal to white audiences.

“That’s who was buying records,” Andy Fuson said, “White people had the money.”

White quartets were hired to sing barbershop, while black quartets did not get the same attention.

“So they took their skills to church and made gospel,” Andy Fuson said.

Gospel and barbershop share characteristics, as do barbershop and jazz.

Lenora Helm Hammonds is the director of the vocal jazz ensemble at NCCU and an assistant professor of jazz studies.

She said she was eager to participate in the Barbershop Revival because “there is a lot of overlap in vocal jazz ensembles.”

After Andy and Warren Fuson attended one of David Wright’s lectures, they knew they wanted to help bring barbershop harmony back to its roots.

Warren Fuson said, “It took us two years to build up the nerve to actually start approaching people.”

The Fusons were wary of being offensive and did not want to seem like they were selling the idea of lost heritage.

Roberta Laws, choir director at NCCU, heard the Fusons wanted to partner with an HBCU.

The history of barbershop interested Laws, and she was disturbed that other HBCUs had not been receptive to the Fuson’s idea.

Andy Fuson said, “As far as we know, we are the first people to ever reach out to the HBCUs on behalf of barbershop.”

Laws said, “We’re right here in Durham where they live. So I asked them to come over and let’s have a conversation about it.”

The Barbershop Harmony Society supports the Fuson’s outreach as a part of the organization’s mission of “Everybody in Harmony”.

Andy Fuson said, “Barbershop Revival is an extension of everyone in harmony. BHS has given us enormous amounts of support.”

Andrew Dundas is a junior journalism major at UNC-CH from Fairview. This spring he is serving as a staff writer/photographer with the Durham VOICE.