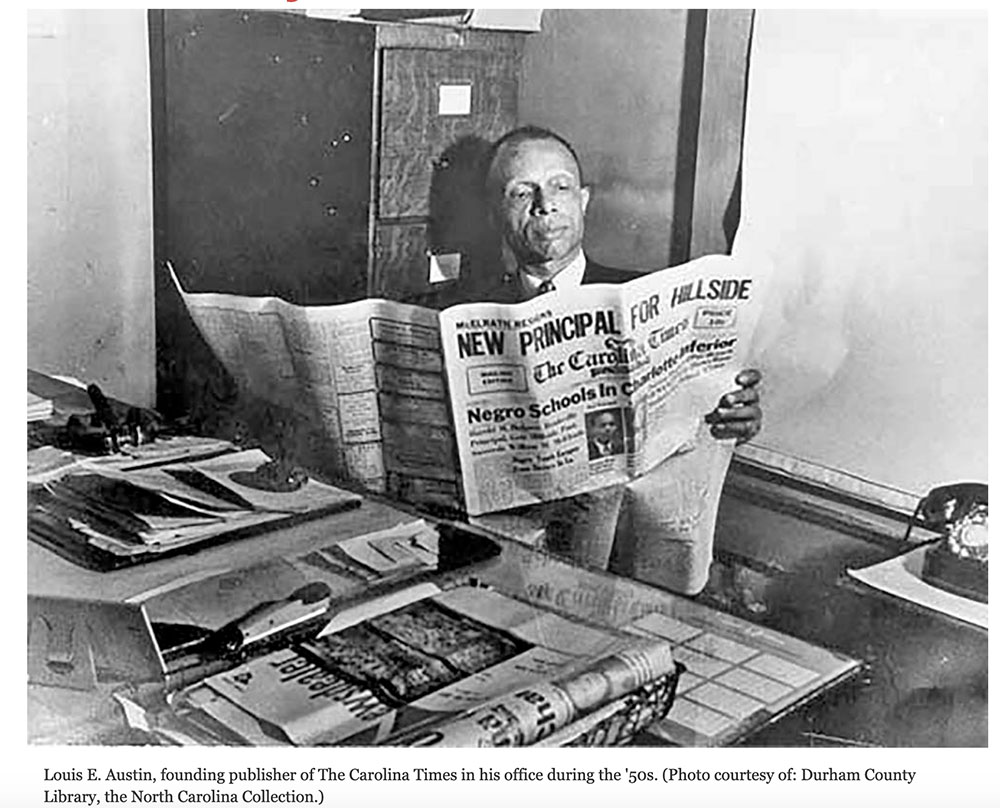 Editor’s Note: With the passing of Kenneth W. Edmonds, publisher of the Carolina Times, we offer as a tribute this profile of Edmonds, his family and the long, proud legacy of the Carolina Times. Originally published in the Durham VOICE, spring of 2017, this article was written by then UNC-CH staff writer and VOICE co-editor, Olivia Browning.

Louis E. Austin bought The Stanford Advertiser in 1927 and transformed the local newspaper into the most important voice for black North Carolinians during the civil rights era. He used The Carolina Times to publicize racial inequities and to fight for racial equality in North Carolina and throughout the U.S.

Austin’s legacy is still carried on 90 years later as The Carolina Times continues to be published by his grandson, Kenneth W. Edmonds. Located at 923 Old Fayetteville Street, it remains the only black-owned and operated paper in Durham.

“The reason my grandfather got into it was to fight against segregation and inequality, primarily against African-Americans, but also for all people who had been marginalized,” Edmonds said. “This is something that concerned him and he tried to use the columns of the paper to fight for justice in every form of life whether it was education, government or living day-to-day life.”

The Carolina Times is published weekly and covers everything from sports and entertainment to city and county government. The paper has a circulation of nearly 6,000.

While the paper has historically served as a voice for African-Americans, it played a crucial role during the civil rights movement.

Austin was involved in one of the first attempts to desegregate higher education in the U.S. In 1933, he personally drove Durham resident Raymond Hocutt to UNC-Chapel Hill to enroll in the pharmacy school.

When Hocutt was denied admission, he filed a civil rights case to integrate the UNC system, with support from the National Association for the Advancement of Colored People.

“During that that time, if you were black and died without a will, all of your money went into the North Carolina educational system,” Edmonds said. “His thought was that if their money was good enough to be used for the UNC education system, then black folks ought to be able to enroll in that system.”

Austin used the paper’s editorial column to document Hocutt’s story and chronicle the struggle for civil rights in the black community.

Trevy McDonald, an assistant professor of broadcast and electronic journalism at UNC-Chapel Hill with a focus in diversity and media, said that the Black press has been a defender of civil rights for African-Americans since its inception in 1827.

“The Black press was essential during the abolition movement, encouraged Southern blacks to migrate to the north during the twentieth century and connected African-Americans beyond their individual communities during the civil rights movement by covering stories not featured in the mainstream press,” she said. “Further, the stories in the Black press humanized the participants in the movement.”

During this time, Edmonds said his grandfather embodied The Carolina Times’  creed which reads, in part, “these pages constitute a battleground across which the struggle for justice must never cease until every underprivileged human being in this world has the opportunity to rise to the fullest capacity with which God has endowed him.”

When Austin died in 1971, his daughter, Vivian Austin Edmonds, assumed the role of publisher. She had worked for the paper since she was 5 years old.

Edmonds said it was during this time that African-Americans in Durham really struggled. Many black-owned businesses in downtown Durham were relocated during urban renewal to make room for the Durham Freeway in 1979.

However, due to a lack of funding, Edmonds said this relocation ultimately shut down many Durham black businesses and devastated one of the country’s most vital black business zones.

Edmonds said The Carolina Times survived urban renewal because the black community supported his grandfather and what his paper stood for.

“We saw that it was never really about relocation, but rather destruction of black businesses and our community,” he said. “We fought for justice.”

Edmonds,63, assumed the position of publisher after his mother retired in 2002. Today he worries that the revitalization of downtown Durham will have a similar effect to that of urban renewal.

Students and young people quickly began to realize rent in Durham was cheap and they could afford to live downtown, he said. As more people started moving downtown, new entertainment spots like the Durham Bulls stadium and the Durham Performing Arts Center opened up.

“With the amazing amount of nightlife and entertainment, more housing options began to open up,” Edmonds said. “Housing began to move out in a ring around the city for people that can’t afford right downtown.”

Due to its proximity to Duke University, North Carolina Central University and the Raleigh-Durham airport, downtown Durham is viewed by many as the perfect location. Edmonds said while people of color can live in any of the apartments downtown, most can’t afford paying $1,500 per month in rent.

“As someone who has lived through urban renewal, the only way to integrate people that are on the lower end of the economic scale is to demand that developers must put affordable housing in each of their markets,” he said. “Once you have free markets, people of color get pushed out.”

The following, the newspaper’s creed, written by founding publisher, L.E. Austin, captures the spirit of the Carolina Times.

We here at The Carolina Times have one solemn covenant to keep, and that is with the thousands of people in all walks of life who turn to these pages week after week for a breath of truth written by our unshackled pen. In keeping such a covenant with our fellowmen we  will be keeping faith with our God. For no man can make or keep a covenant with God Almighty who cannot keep one with his fellowmen.

The faith our readers have in us here at The Carolina Times has been bought with the blood of those strong, loyal men and women who have stood side by side with us in the dark hours of its existence. Sometimes they have endured crucifixions at the hands of their beneficiaries, embarrassments at the hand of both their enemies and fair weather friends. Amidst it all we have never bowed to the gods of gold and silver. We have kept our skirts clean, we have kept the record straight. Our face has always been turned toward the enemy.

This old newspaper has weathered some terrible storms and she will weather some more because she has an anchor of deep religious faith. We believe here at The Carolina Times that if our motive is just, our fight unselfish, we will ultimately be victorious.

Readers will overlook misspelled words, incorrect English, poor rhetoric and numerous typographical errors. They will soon forget about how very poor the mechanical makeup of these pages is. But the most unlearned reader will never forget if we allow selfish, little, power-drunk men to use these sacred columns for their own purposes.

These pages constitute a battleground across which the struggle for justice must never cease until every underprivileged human being in this world has the opportunity to rise to the fullest capacity with which God has endowed him.

Olivia Browning of Fairfax, Va., is a senior at UNC-CH double majoring in economics and business journalism. She is serving as co-editor of the Durham VOICE.