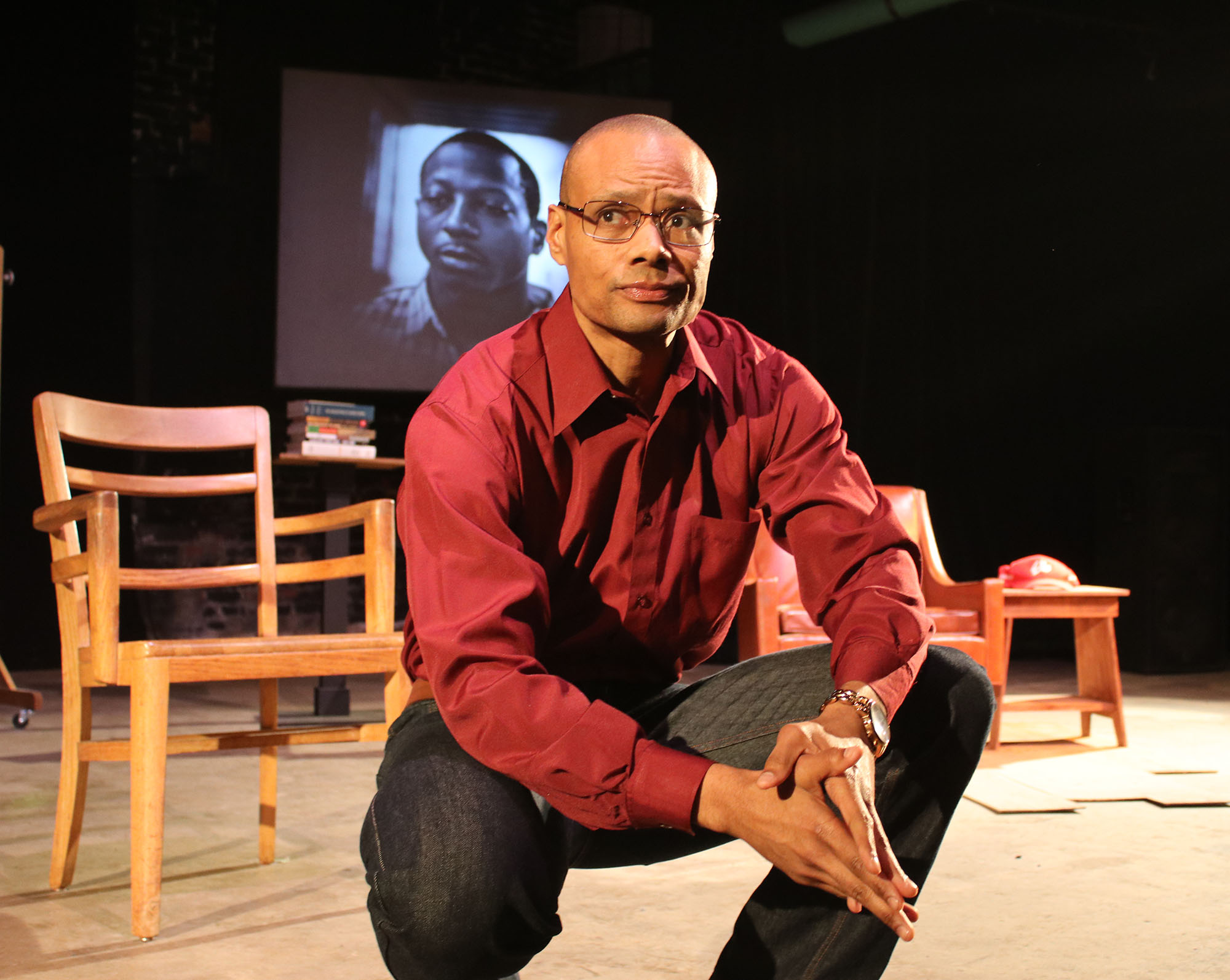 Playwright and actor Sonny Kelly delivers a monologue from his one-man show. “The Talk,” presented in Durham last winter 2019. A video version of “The Talk” is available via streaming, June 12-July 10. (Durham VOICE photo by Adrianne Cleven)

Of late, there has been much talk about “the talk.”

Now, a year and a half after a dramatic play by the same name debuted in Durham, a video version will begin streaming for a month, beginning today, Friday, June 12. (See details below.)

“The Talk” dramatizes the frank conversation a black father must have with his young son about how to survive in a racially divided nation, especially in regard to responding to encounters with law enforcement officers.

So the message of UNC-CH playwright Sonny Kelly and director Joseph Megel is more relevant now than ever.

In January 2019, I sent a team of student journalists to cover the show’s opening for the Durham VOICE, the inner-city lab newspaper I lead. The photos here are by UNC-CH student photographer Adrianne Cleven.

Excerpted from our coverage by student reporter Diane Adame:

Kelly, UNC-CH doctoral candidate and writer and performer of “The Talk,” wrote the piece in 2015 after explaining the Baltimore riots to his 7-year-old son, Sterling.

“We learned the source of all of this was a man named Freddie Gray who was arrested and died in police custody,” Kelly said, “and I had to explain to my son that this story revolved around the fact that he was a black man.

“After explaining that, I looked at my son’s face and realized, he is a black boy and is one day going to become a black man, so this story is an update in his own identity and survival in this world.”

Two weeks later, Kelly found himself weeping about the experience and began typing his thoughts on his cellphone, creating the monologue, “Sterling’s Story,” which he later presented to professor Megel, artistic director of StreetSigns and artist-in-residence in performance studies at UNC-CH.

Megel responded, “This piece really touched my heart so deeply that I said, ‘Sonny, you need to expand this and make this more, because it is just so powerful…The fact that he was faced with having to say to his son that the world may see him as a dangerous person because of the color of his skin just broke my heart…”

Durham resident Carlton Koonce attended one of those early performances of “The Talk” along with his son, Michael, a fifth grader. After the show, Koonce said thoughtfully, “To see the tragic story of so many young men that Michael has learned about in school – Emmett Till and Tamir Rice, who were not much older than him when they were killed – it really brought the issues we’ve been talking about as a father/son to the forefront for him.”

Michael told Durham VOICE reporter Adrianne Cleven his father had taught him that if he was ever stopped by the police, “The most important thing is just to act polite and to do what they tell you to do.”

The new video version of “The Talk” is a StreetSigns/Bulldog Ensemble Theater production in association with the UNC-CH Department of Communication.  According to a news release from Megel, “PlayMakers Repertory Company is partnering with StreetSigns and Bulldog Ensemble Theater to help bring this video to the widest possible audience. Vivienne Benesch, artistic director of PlayMakers,says, ‘PlayMakers is eager to share with our audiences this healing, eye opening, and inspiring play, perhaps more crucial now than ever; and to be able to amplify a new work born at UNC Chapel Hill and premiered by two essential small theatre companies in our community makes it all the more meaningful.’”

Reflecting on the play’s immediate relevance, Kelly told me, “In this season, I am finding that, as agonizing and as frustrating as it is to see the videos and hear the bad news, I am more inspired and motivated to get to work telling my story, which is really our story, because I believe it’s time to start draping our nation — that’s the audience — with this connective tissue. So, I’ve been driven!”

Kelly, who earned his doctorate from UNC-CH in May 2019, is now serving as a professor of communications at Fayetteville Technical Community College, where he plans to stage “The Talk” this coming academic year for his students.

“The Talk” ignites and enables conversations, and that’s what inspires Kelly.

“People are at a loss,” he says. “People don’t know how to broach the subject, much less forge solutions. So, I lead with storytelling by putting my skin in the game — and I’ll show you my soft underbelly — I’m really scared for my sons, but I’m also really in love with my country. I am both. I am both, right?”

Director Megel says the timing of this video version of “The Talk” feels like an auspicious coincidence, explaining, “… in the wake of another series of intolerable deaths at the hands of those charged with protecting and serving all the people, we have an opportunity, here and now, and not one minute later, to elevate this long overdue conversation —  and Sonny Kelly has spent a lifetime as a son, as a father, as a scholar preparing to contribute to it.”

For further information, go to: streetsignscenter@gmail.com.

• for more information on Sonny Kelly, go to

• To see the original coverage of “The Talk” in the Durham VOICE, go to