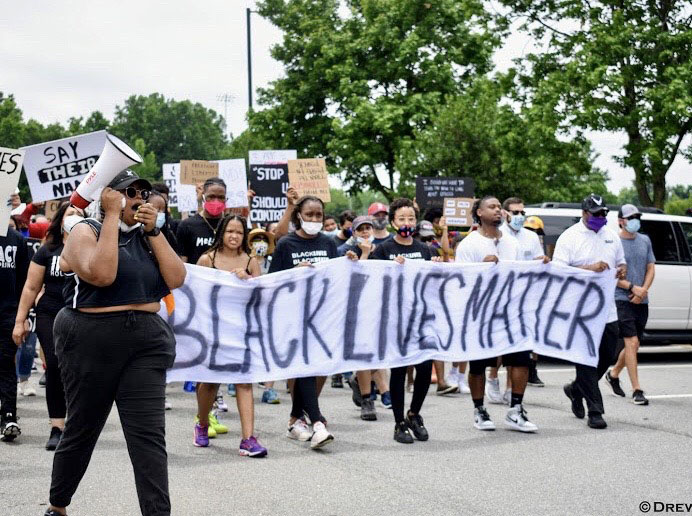 Ever since George Floyd’s murder, there has been huge outrage from citizens of the United States. Many protests took place in every state in order to show support for the Black Lives Matter movement. Back in June, a peaceful protest took place in Durham downtown where numerous people marched.

I believe that this is a very important movement and should be supported by every single individual. No one should feel threatened just because of the presence of a black person or people. Black people have been targeted unfairly for the longest and now all people are finally speaking up about it.

This shouldn’t be an issue in today’s world but unfortunately still is.

I spend time often talking to my friends and they have very strong opinions on this topic. Julieta Torres, 14, is completely in favor of the protests.

She said local protests are “progressive and we need them to make the change” since words don’t seem to be working.

“People of color are being murdered in the streets only for the color of their skin,” Torres said. “People deserve justice and that is what the protest is trying to achieve. We will fight until we get justice and we won’t stop.”

On a different day back in June, I drove past the police department and I saw around 15 or 20 protestors camping outside. Continuing further downtown, there were inspiring paintings and quotes that many supporters in Durham had gathered to put up. Previously it was hard for me to imagine the size and scope of the Black Lives Matter protests but witnessing firsthand the dedication of those protestors made me realize that this movement is more than what the news covers.

Another one of my close friends, Andrea Escobar, 14, said she feels the same way.

“For too long the black people of the United States have been oppressed under the guise of justice,” Escobar said. “The American justice system cares not for people of color, the poor or anyone that does not fit the ideal.”

Escobar said the “excuse” of justice has been used to “murder, rape and steal.”

“The people of this country are speaking and finally making a change,” she said.

It is crucial for change to occur and while I understood that on paper, I didn’t understand how much perseverance it requires.

This movement made a huge impact on my life. It helped me recognize that racism was and still is very prevalent in today’s world.

Protesters painted “defund police” in big bright yellow letters on East Main Street. On the morning of the tenth day of camping outside the police department, four protestors were arrested. During the small scuffle, one of protestor even said “don’t put him on one knee now.”

This entire topic is controversial in media these days. Although many people are using social media to show their support, there are others that are using it to discourage the movement.

While scrolling through Instagram, I saw a few comments that were not in favor of the movement. Some seem to suggest the issues being brought up are the fault of Black people.

One user, calling themselves Americanpatriotscoalition, commented “why don’t you start with the African leaders that first sold African slaves across the world?”

I came across another user, Ferrone 28, who stated “according to the BLM movement you only matter if killed by a white cop which doesn’t make sense.”

There are still a lot of people who believe that they are superior and deserve more than others. Many people, however, will go beyond limits to get everyone to understand that there needs to change. I believe that unless society gets through their head that Black Lives Matter as much as every other life, nothing will alter.

Plenty of young people have used their social media to bring as much attention as they can to this movement and that has greatly moved me. I am very happy and proud that many people around me understand and support this movement.

Nway Dee is a freshman at the City of Medicine Academy. This fall she is serving as an intern with DCI and a reporter/photographer with the Durham VOICE.