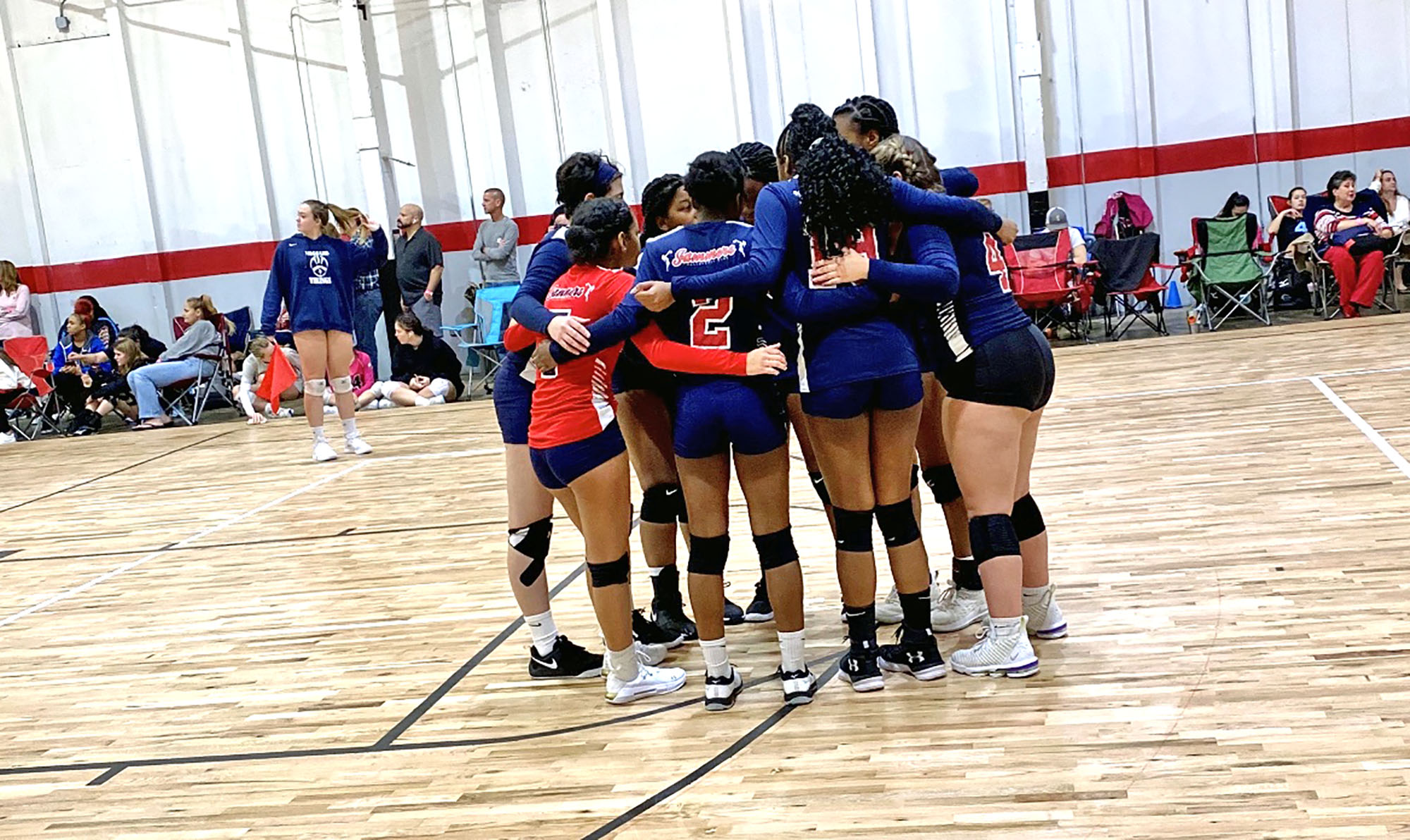 The Jammers 16 Blue Volleyball team huddles up during a match at the Wake Forest Sports Center just before the Covid lockdowns. The Jammers Volleyball Club was born locally out of Riverside High School to offer competition level volleyball training for girls 11-18-years-old. (Photo courtesy of Madison Reese)

Editor’s Note: This story was written just before the NCHSAA announced the postponement of high school athletics for fall 2020. Volleyball and cross country are the first sports that will be allowed to practice: both start practice Nov. 4 with the first competition set for Nov. 16.

Covid-19 has affected the world in ways we’d never imagine.

As an adversary, it’s affected our economy, our population, our government and the way our country functions as a whole. Think about how COVID-19 has affected your personal life.

Has it affected your job or your peers or your family?

Now, think of how the pandemic might have affected people in our community, like high school student athletes. Many, especially seniors, might feel as if their worlds were changed after the local Board of Education announced that the athletic season was suspended indefinitely.

Now, because of the pandemic, many senior athletes probably won’t have their senior seasons.

Recently, Durham Public Schools announced that it will be suspending high school athletics indefinitely out of health and safety concerns over the pandemic. The loss of a season has not only affected the physical health of some student athletes but also, some have said, their mental health.

Meagan Williams is a varsity volleyball player at Jordan High school and said while mental health issues, like anxiety, have been “around” for teens, those issues didn’t necessarily start with Covid-19.

“Obviously they [anxiety issues] didn’t start because of Covid and they won’t end when it isn’t as prominent, but Covid has made them significantly worse,” Williams said.

Before Covid-19, her main coping mechanism for dealing with stress was volleyball. She said, back then, she never had to think or worry about anything else other than what was happening on the court.

“Not having that space anymore, that escape has made my anxiety much worse and my attacks more frequent,” Williams said of her own mental health. “I needed that distraction somewhere that was constant and wasn’t going to change, someplace that was always going to be there.”

Williams is not alone.

The NCAA also found that 4-in-5 students cited local regulations and a “lack of access to appropriate facilities” as barriers to their athletics training. Other emotional barriers included a fear of exposure to COVID-19 (43 percent), lack of motivation (40 percent), feelings of stress or anxiety (21 percent) and sadness or depression (13 percent).

The pandemic has affected student athletes in other ways, too, such as how they work out.

Alex McAlmon, a varsity baseball player at SouthEast High School in Raleigh said he has been staying active daily since the first day of sports being canceled.

McAlmon added that the pandemic has had very little effect on his mental health.

All of the chaos has athletic departments all over the country struggling with the question, “How do we keep athletes safe while playing during the pandemic?”

Before asking that question, however, there could be another, more important one.

Is it safe to have a fall sports season?

Coach Liz Markovitz, assistant volleyball coach at Wake Technical Community College and the head 15 Red Semi-National club volleyball coach at Jammers Volleyball Club in Durhambelieves that it could be possible to have some kind of fall season but wonders how coaches and athletic departments keep athletes safe.

“We could have made some of it work but there’s no guarantee we can keep everyone safe because we can’t control what the girls do off the court,” Markovitz said.

As Markovitz alluded, coaches cannot control what their players do off the court or who they hangout around during their personal time. Similarly, it could be asked how coaches would try to protect players when directly on the court or field.

“Make sure players wash their hands and use hand sanitizer as much as possible,” Floyd said. “I’d remind my players not to touch their face and perform regular temp checks at the start of practices.”

Coach Erik Hofheinz, the head volleyball coach at Jordan High school and the head 14 Ruby coach at NC Volleyball Academy said that he’d have players wear masks prior to arrival and upon leaving any games or practices.

“Temperatures will be recorded and protocols have been put in place to distance and keep athletes in the same groups to reduce interaction,” he said. “Hand sanitizer will be used before and after and balls will be wiped after each session.”

Coaches told the Durham VOICE that the well-being of players is what is most important when thinking about going back into playing another season of sports.

Some players say they would feel safe returning to their high school sports?

McAlmon thinks things can be done in such a way that players would feel safe and he believes that high schools should have a season.

“Yes we should definitely be given a season,” he added.

Williams believes that for some sports it may be okay to have a season but for others it might not.

“I think it depends on the sport,” she said. “Most are very different when it comes to what’s required from you physically. This shouldn’t be a thing where every sport is grouped into one category. For the ones that can easily take preventative measures and be safe, yes there shouldn’t be any issues with them resuming.

Williams said these include non-contact sports and/or individual sports like golf or tennis. For sports that wouldn’t be able to take those precautions and require more contact, right now is not safe for a season, she added.

“I think sports that shouldn’t play right now include sports like football, basketball and wrestling.”

Navigating through the COVID-19 pandemic presents different challenges for different athletes but one thing we for sure is that athletes and athletics will bounce back.

Hofheinz said players should try to stay as positive as possible and to “remember priorities” during this quiet period in sports.

“Be grateful for everything we have and use this time to really evaluate yourself and where you go and how you think and how you work,” she said. “Keep working and making yourself better.”

Madison Reese is a junior at Jordan High School. This fall she is serving as an intern with DCI and a reporter/photographer with the Durham VOICE.