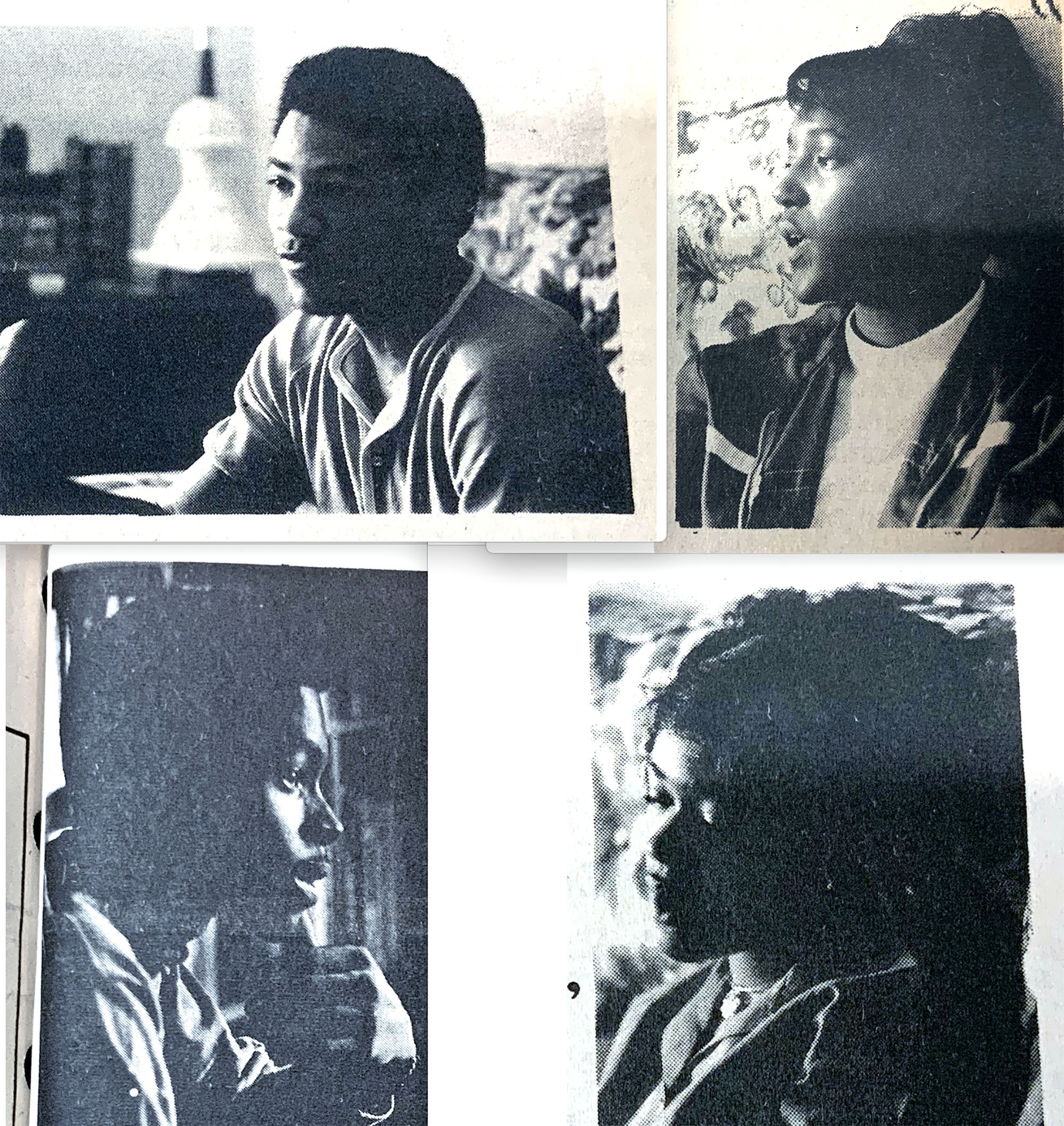 Fifty years ago this past spring, four outstanding 18-year-old Black graduating high school seniors from a rural high school in Western North Carolina teamed up to express their gloves-off opinions about the first year of school integration and the state of race relations.

Earlier this fall, those same four “seniors” of a different sort, all now 68 years old, reunited to re-assess how far this nation has come — and how far we have yet to go.

The reunion, courtesy of Zoom, recreated a groundbreaking 1970 local reporting project, published as a full-page feature in Forest City THIS WEEK, a community newspaper I helped start and run in the former milltown nestled in the N.C. foothills, mid-way between Charlotte and Asheville.

Credit goes to Pat Jobe, Forest City freelance journalist, and my former partner at the McDowell Express of Marion, N.C., for resurrecting that long-ago feature with the Forest City 4 and getting the ball rolling on the reunion interview.

Thompson, their former high school teacher who pioneering groundbreaking classes in U.S. History and Black Studies, is now a noted author and educator of the gifted and talented. Beginning the Zoom session, he mused, “It’s strange to look back and read that interview. We were overly optimistic.”

The lead headline of that May 1970 full newspaper page read: “I don’t want to be black Jesie…I want to be Jesie.”

THEN:  Jesie Logan’s entire quote from the 1970 story puts the headline in context: “You know, it wasn’t too long ago that if somebody called us “Black,” we’d get mad. What I say is this, call me Jesie. I don’t want to be black Jesie, I just want to be Jesie.”

NOW: Fifty years later, Logan, a retired PPG quality control supervisor, reflected, “We prayed for ourselves and our children… Now it looks like things are going backward.”

NOW: Johnson, a local businessman, said, “Affirmative action was supposed to balance things. We gave up on it too soon. It’s like the way you cook seafood, real slow. We’ve had a little more and a little more heat, and now we’re cooked.”

THEN: Steve Hudson in the 1970 interview said, “I work in a restaurant, and (white) people come up to the window and say to a Black man about 30 years old, ‘Have you got that, boy?’ It’s like you’re a ‘boy’ if you’re Black until you’re an old man, then you’re ‘uncle.’

NOW:  Hudson, a long-time insurance agent, now says, “I listen to talk radio because I want to hear the crazy theories they repeat over and over. They had (Attorney General William) Barr on yesterday. He’s supposed to be the attorney general for the whole country, but he sounds like Trump’s lawyer. They were talking about him encouraging people to vote twice. He never would say Trump was wrong.”

The most poignant moment came when Hudson asked about racism in general.

“Why do they hate us? We’re not different. We’re working jobs just like they do. What’s different about us?” Hudson asked.

THEN: In the 1970 interview, Katrina Littlejohn Kornegay addressed the issue of how Black students were referred to by white students in that first year of school integration. “Well, I resent ‘colored’ and ‘negro.’ I’d rather be called ‘Black.’ I like it best. ‘Nigra’ is another form of saying ‘nigger.’ They’re trying to say ‘negro,’ but they’re stumbling all over the word to keep from saying ‘nigger,’ but it still comes out ‘nigra.’

NOW: Littlejohn Kornegay got her start in law enforcement with Rutherford Sheriff Damon Huskey and moved to Wake County in 1987 to work in the sheriff’s department. She said personally she has not been subjected to racist treatment in her career, but she was unapologetic in her disdain for the current trends around white power advocates, saying, “It’s always been there, but now they feel set free to say whatever they want to say. They’re not worried about consequences now.”

Still their teacher, all these years after

And here, I’ll let Jobe pick up the narrative.

Thompson, their former high school teacher, picked up the theme: “Did you ever think you would live to see the day Nazis would march with torches like they did in Charlottesville?” His former students heard him and responded, same as it ever was.

Hudson bemoaned the fact that during the 2016 campaign, then candidate Trump had made fun of a reporter with a disability.

Logan, the former PPG quality control manager, reflected, “The biggest crime for us is that we’re Black. They just hate us because we’re Black,” She told a number of stories of discrimination at PPG where she was told she had failed a test, but was not allowed to see the test, then being required to take courses at the community college that white coworkers in the same job were not required to take.

She said she finally achieved rank in quality control and “ended up training people who made more money than me.” She laughed and said, “I’m finally getting to tell the truth about them, because they can’t fire me now.”

Johnson said after he got out of college, he was determined to come back to Forest City. He was a management trainee with a grocery chain, and like all management trainees, he was required to bag groceries as part of his training.

But a white woman customer objected, complaining, “That nigger has his hands on my food.”

Johnson said it is a moment he will never forget. And it hurts on and on.

“Those stories cut deep, and you don’t lose it,” Johnson said. “I knew my decision to come back to Rutherford County was not going to be easy,”

But teacher Thompson reminded Johnson that when he was a young student, he had told his teacher, “When someone uses that word, that makes him inferior. It doesn’t make me inferior. He’s reflecting back onto himself.”

Logan said the passage of the Civil Rights Act of 1964 guaranteed that Blacks would have access to shopping and public accommodations. “But today my sons have friends who are told they are threatening the store owner by being in their stores,” she said. “The (store owners) ask them to leave.”

When Thompson talked about news reports of white police officers recently forcing a Black teenage girl (face-down) onto hot pavement where she was badly burned, he vowed, “They wouldn’t do that to their daughters.”

Hudson said, “It’s like they (the police) think we’re all doing drugs,” to a chorus of affirmative groans from the others.

Logan criticized the president’s cabinet and other government officials, “They haven’t stood up to him the whole time.”

Johnson also complained about the loss of economic viability as a goal of the civil rights movement.

“If you listen to Dr. King’s last speech, he talks about it. Not in those words exactly, but it was part of his dream that got lost,” Johnson said.

Johnson pushed for activism around the election. He asked, “Are we expecting the young people to fix this?” to a chorus of “No, No!” from the others.

“We have got to get in the fight!” Johnson urged. “Every one of us is responsible for getting seven people who have never voted to the polls!”

Teacher Thompson, reflecting afterward on the reunion interview, said, “What a glorious

conversation that was.  It was like an infusion of oxygen, when I did not know I had been suffocating.”

And directly addressing The Forest City 4, he thanked his former students, “How incredible to hear your voices, and to get the blasts of that honesty and candid spirit.”

Where are they now

Jesie Logan: After ERHS, Logan earned her associate’s degree in general office technology and went to work for PPG, a fiberglass plant in Cleveland County, where she worked on and off for 20 years in the quality control lab.  Returning to college, she earned another associate’s degree in 2001 so she could advance to become a research technician at PPG. Logan, who has two sons, retired as a supervisor of quality control in 2016. She now lives in the small Rutherford County community of Bostic. Logan says that the 1970 interview influenced her to excel in whatever profession that she chose and to help make things better for the next generation.

Steve Hudson: Following his graduation from East Rutherford High School, Hudson earned a bachelor’s degree in economics from N.C.  A & T in 1974. After working 48 years in the insurance business in Greensboro, he moved back home to Rutherford County in 2013, where he describes himself as “semi-retired, commuting between Forest City and Greensboro.”

Katrina Kornegay Littlejohn:  After ERHS, Kornegay attended Livingstone College for a year, earning her associate’s degree in business administration from Isothermal Community College in Spindale. She began her 23-year-long career in law enforcement, serving as the first Black dispatcher for the Rutherford County Sheriff’s Dept, and then moving to Wake County in a similar position with a much larger operation. After retiring from the Wake County Sheriff’s Dept in ’05, she went back to college, earning her bachelor’s degree in criminal justice/administration from Strayer University in 2011. Currently a resident of Raleigh, she is the proud mother of two sons and three granddaughters.

Alfred Johnson: After earning his bachelor’s degree in political science from Livingstone College in Salisbury, Johnson returned home to Forest City where he worked for a short time in management with Harris-Teeter before serving for seven years as an instructor and counselor with human resources at the local Isothermal Community College.  He has worked the remainder of his career as a self-employed businessman in his hometown of Forest City. Johnson and his wife have three grown children and six grandchildren.

Michael Thompson:  The Washington and Lee graduate (Philosophy and Anthropology) began his classroom teaching and administrative career in Rutherford County in 1969. From that humble start, he grown to be the author of 80-plus books and is currently teaching 350 students in eight online courses, with emphasis on the gifted students. Thompson, 73, lives in Durham with his wife, Myriam.

Pat Jobe:  Rutherford County freelance writer Pat Jobe, 66, lives in Grahamtown, the historically Black neighborhood of Forest City, about six blocks from the house in which he grew up. He is semi-retired, although he serves as the part-time minister of the Unitarian Universalist Fellowship of Lake Norman and serves as the volunteer minister of All Souls Community, a new church in Rutherford County. He is a graduate of High Point University and studied at both Erskine Theological Seminary and Meadeville Lombard School of Theology. His reporting appears in Rutherford Weekly and the Daily Courier of Forest City. He lives with his partner of 12 years, Gabriele Rissmeyer, and between them they have nine children and two granddaughters. He says he believes Jock Lauterer and Mike Thompson were two lights in his young life that convinced him there is more than one way to look at politics, religion, and social issues.

This reporting project would not have been accomplished without the diligent work and relentless dedication of freelance journalist Pat Jobe, who organized and then transcribed this current Zoom session.  Big thanks also to the Forest City 4, each of whom made sacrifices of time and energy to make the reunion interview possible. Their former teacher, Mike Thompson, a true Renaissance Man, knows how valuable he has been to all of us these over five decades. He continues to inspire and teach us.

Special thanks also to Denise Strickland of the Mooneyham Public Library of Forest City, Alice Bradley of the Genealogical Society of Old Tryon County, and Charles Wiggins of the Isothermal Community College Library in Spindale.