For 100 years the Salvation Army has been working to better the community of Durham. It has also strived to help a demographic rising in numbers — Durham’s Hispanic community. 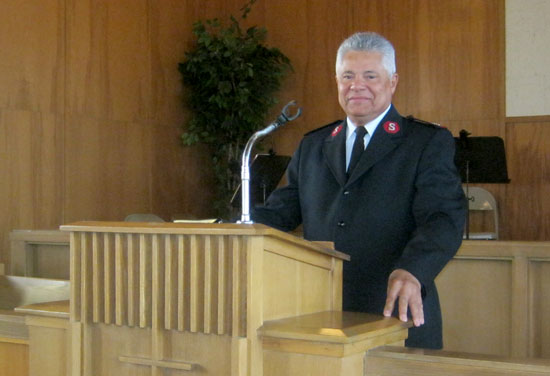 Luis Rodriguez is one of the pastors at the Alston Street Salvation Army branch. (Staff photo by Emma Witman)

The Hispanic Outpost is a branch of the Durham Salvation Army with just that goal.  It is located in the organization’s building on Alston Avenue.

With Hispanics making up almost one-fifth of those living in Northeast Central Durham, reaching out to them has become even more important.

The growing Hispanic population has prompted not only the Salvation Army, but also several other latino organizations in Durham to design programs around their needs, including El Centro Hispano, a non-profit organization on Main Street.

The Hispanic Outpost provides the community with the traditional services associated with the Salvation Army, such as emergency financial assistance, food and nutrition counseling and family stores. 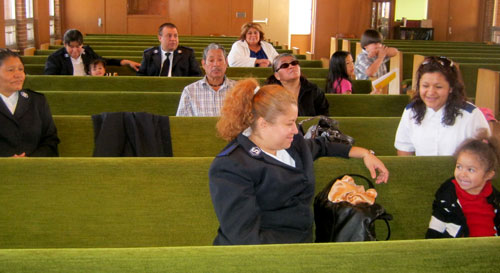 Members of the congregation wait for the service to begin. In the front row is Silvia Martínez, with her two daughters.

In addition, the Salvation Army hosts a church service and Sunday school program in Spanish each week to accommodate their Spanish-speaking members. While speaking fluent English is a goal for many of these members, language currently plays a critical role in the organization’s ability to serve the community.

“One of the things I love is that you will see that the children play together and enjoy each other,” Byron said.  She is pleased with the Hispanic Outpost’s success in merging two seemingly separate communities, creating a positive interaction particularly among the children.

On the morning of Jan. 30, about 20 members of the Hispanic community gathered to worship with Salvation Army Captain Luis Rodriguez and his wife Vilma Rodriguez, the pastors. Luis Rodriguez has not worked with Durham’s Hispanic Outpost for long, but he was previously head of the Salvation Army in Florida’s Daytona Beach area.

One member of the group present for worship explained that more of the community would come out if so many did not have to work on Sundays.

Silvia Martínez, who has been attending church at the Hispanic Outpost for three years and has lived in Durham for eight, sat with her two daughters Sunday as she awaited the start of the service. “More than anything, we take advantage of the services this organization offers to listen to the word of God,” Martínez said.

This year is an important one for the local Salvation Army, and Byron calls it somewhat symbolic. “2011 is the first year of our second century in Durham. This is sort of a year to embark,” she said. “We’ve got a strategic planning process underway, which is very exciting.”

Byron added that, unsurprisingly, the recession has affected their services and the level of need in the community. “One can see the need…by the number of people we turn away for emergency services. We know that the recession may be turning a corner, but it hasn’t gotten back to normal yet,” she said.

Prefer a printer-friendly version of this story? Click here for a PDF of it.