Between 2002 and 2007, Latino entrepreneurship grew by 135 percent in the state – faster than in any state but Arkansas, according to the most recent figures from the U.S. Census Bureau. 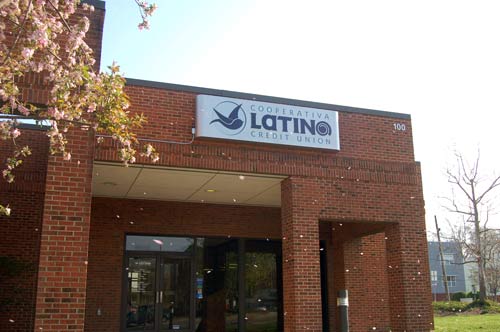 Cherry blossoms bloom outside the entrance to the Latino Community Credit Union. Inside, members can receive financial training and bilingual assistance. (Staff photo by Leah Campbell)

The Latino Community Credit Union, or La Cooperativa Latina de Credita as it is known in Spanish, is hoping to help boost those statistics. The LCCU in Durham, the largest and fastest growing Hispanic-focused credit union in the United States according to its website, is accelerating Latino entrepreneurship their accredited and award-winning financial education program.

“We realized that our members had an average education level of seventh grade,” Director of Organizational Development Alejandro Sánchez said, “and so when they come here with the mentality of an all-cash economy like they’re accustomed to in Latin America – they come with mistrust.”

LCCU’s financial education program eases that mistrust. Through six workshops and intense conversations with motivated employees, financial services become accessible to the members and put them on the path to economic development, Sánchez said. The branch even holds a graduation for members who complete the program, complete with caps and gowns.

Founded in 2000 by the state of North Carolina to protect immigrants’ savings from increasing burglary, LCCU serves primarily under-resourced members in the community. According to its website, it has members from all 18-Spanish speaking nations in Latin America and tailors its services to North Carolina’s quickly growing Latino population.

“New immigrants used to be known as walking ATMs,” Sánchez said. “They needed a secure place for their money. That’s why LCCU was founded.”

The Durham location has inspired expansion. According to the website, LCCU branches now exist in Charlotte, Monroe, Carrboro, Raleigh, Greensboro, Winston-Salem, Fayetteville and Garner – opening their doors to thousands in need of the aid LCCU’s bilingual staff provides.

The staff supplies members with financial literacy training and a range of credit and savings products, including Individual Development Accounts (IDAs) and home mortgages, Sánchez said. IDAs are matched savings accounts that allow low-income families to save and build their assets to purchase a home, pursue an education or start a business.

LCCU is also willing to lend to illegal immigrants and help them secure Tax Identification Numbers in lieu of Social Security numbers, according to the website.

“We are just very open with our community and our members,” LCCU teller Maria Isabel Velazquez said.

But LCCU’s membership isn’t restricted to those of Latino descent. Anyone with a valid government photo I.D. and $20 can invest. In fact, in recent years, an increasing number of immigrant and refugee populations have flocked to LCCU branches, including Kenyans, Burmese and Bhutanese, Sánchez said. This natural growth led to LCCU’s 2010 recognition with the E Pluribus Unum Prize, a national award for exceptional immigrant integration initiatives awarded by the Migration Policy Institute.

According to LCCU’s website, North Carolina has one of the fastest growing Latino populations in the country. Sánchez says LCCU is striving to provide everyone who needs it with a secure financial base that they can understand and take part in.