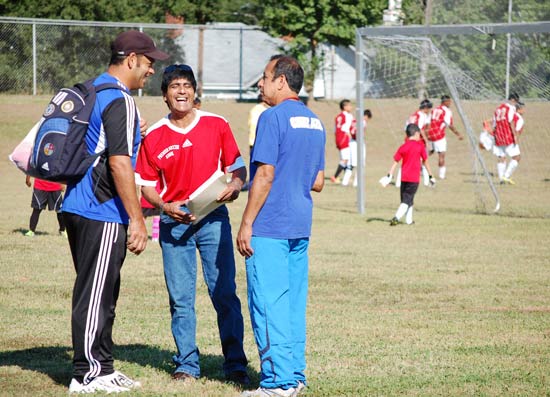 George Navarro (center), President of the Premier Soccer School & Soccer League, converses with other coaches, while one of the Premier teams warm up prior to the first game of the soccer tournament at the Holton Career and Resource Center on Sept. 15. (Staff photo by Carol Longoria)

The sun rises over Holton Career and Resource Center on Saturday morning, Sept. 15, while dozens of young athletes cluster with their teams for warm-ups in anticipation of the start of the soccer games.

Tournament coordinators Alberto Carrasquillo and Fidel Quiroga ensure coaches know their field assignments and the rules of the tournament.  A few minutes later Quirogo paints the field boundaries with a can of orange spray paint.

A Durham soccer tournament for children ages 6 through 12 continues for three consecutive Saturdays (Sept. 15, 22 & 29) and ends with the championship games to be held in conjunction with the Latino Festival on Sept. 29.

Carrasquillo said, “This year we have the most teams participating.”

In the past, the tournament lasted only one day allowing limited participation.  Last year the decision was made to start the tournament earlier than the festival to include more teams.  The teams with the best records compete in the Championships on Sept. 29 at the Rock Quarry Park located at 701 Stadium Drive in Durham in conjunction with the Latino Festival.  While the soccer games start at 10 a.m., the Latino Festival will kick off at noon.

George Navarro of Premier Soccer School & Soccer League in Cary has been working with student athletes for eight years.  According to Navarro, Hispanic children may start out behind socially because both parents work, an area where he believes team sports like soccer can help.

“We teach them more than soccer, we teach them life lessons,” says Navarro of the children he works with. 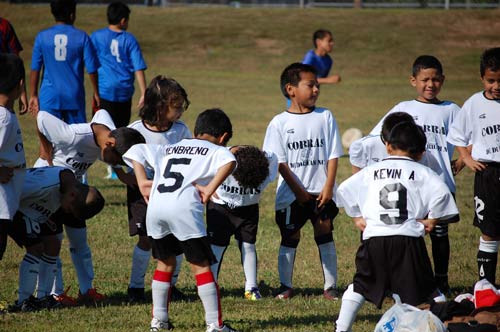 Members of the Cobras team warm up before the first game of the soccer tournament opening on Sept. 15 at the Holton Career and Resource Center. (Staff photo by Carol Longoria)

The Premier League works with 60 children from the surrounding areas and brought three teams to the first day of the tournament on Sept. 15.   The Premier team has players from countries around the world, including Mexico, El Salvador, Honduras, and Thailand.

The Latino Festival is coordinated by Durham Parks and Recreation; however, Cynthia Booth says, “We partner with the community as much as we can.”  Alberto Carrasquillo from the Holton Career and Resource Center along with Fidel Quiroga are coordinating the teams for the soccer tournament this year.

They report this is the largest turn-out with 12 teams competing.  Booth expects over 4,000 people to attend the Latino Festival on Sept. 29.  Booth explains that the purpose of Latino Festival is to “educate the residents in Durham of Hispanic traditions and folklore and to promote the recreational opportunities in Durham Parks and Rec.”  Additionally, “The festival is also an observation of National Hispanic Heritage month, a celebration of the rich history of Spain, Mexico, the Caribbean and Central and South America,” Booth said.

Started in 2005 under the direction of Durham city mayor William V. Bell,  the Latino Festival coordinators collaborate with the community and Hispanic leaders.

The Latino Festival is a free event which includes live music, authentic foods, children’s activities, arts and crafts, and opportunities to learn about health, education, and employment available in the community.

According to the event web site, special Latino musical performances include Los Galleros De Mexico, Sajaso, and West End Mambo with a special Zumba demonstration by Erica Dixon.  Children’s activities include a puppet show, games, a piñata, face-painting and more.

Details are available on the City of Durham web site at:  http://durhamnc.gov/ich/op/prd/Pages/Latino-Festival.aspx.