J’Quan, 13, said he used to be uncomfortable performing in front of an audience before he joined the Patricia Taborn Modeling & Talent Agency, Inc. two years ago. 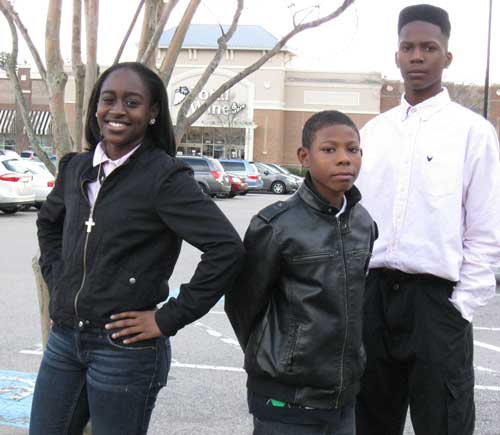 Striking a pose, (left to right) TaTyana, Milton and J’Quan having fun as they practice their modeling poses. Milton says his favorite part is when he gets to dress up and go to local events. (Staff photo by Anna Starnes)

“We have to model at different places, and you have to be brave,” he said. “I used to not be very brave in front of people. I used to shake a lot, but now since I have done this, I’m not afraid.”

In 2006, Rhonda Cozart and San Griffin created the agency in memory of their mother, Patricia Taborn. Their parents owned a boutique in Durham and often staged fashion shows. They believed this agency could give back to the community by offering local youth a positive extracurricular activity. The company became incorporated in 2009 and became an official 501(c)(3) nonprofit organization in 2010.

“A lot of modeling is really popular on TV and we want to give the youth something that attracts them,” Griffin said. “Once we get them, catch them with the modeling, they go to lifestyle workshops throughout the year, mentoring sessions and bonding sessions, as well as being able to perform at different family venues throughout the year.”

The benefits of the Patricia Taborn Agency shine through member TaTyana as she holds herself with poise. Speaking confidently and eloquently, TaTyana appears much older than her 14 years.

“I am a veteran model,” she said. “I have been with the agency since it pretty much started. I have seen the program grow a lot and each and every year it just gets better and better. We just improve, and I see the board members, they are making a lot of effort.”

TaTyana’s sincere words resonate with Griffin as she jokingly admonishes TaTyana to not make her cry.

The agency offers about ten workshops a year that use fun and engaging activities as an avenue to instill key life skills in its members. Last year, a well-established director taught the children how to present themselves at a casting call. She taught them to speak confidently in front of a camera and gave them feedback as they read through scripts.

Willa Brigham, an award-winning storyteller also led a workshop that taught the children about positive self-image and how to use money wisely.

Other workshops focused on healthy living by teaching members to stay away from drugs and negative people.

To promote fun fitness, the children have taken a yoga class and a martial arts class. 12-year-old Milton, another member, said he has learned to be more outgoing as a result of the agency’s workshops.

In preparing its students for their future, the organization also stresses financial planning and education.

“This year everyone received a savings account or a college foundation account,” Griffin said. “They got an initial deposit to create a dialogue with their parents about saving and college. Encouraging them to save those pennies and take them to the bank.”

The agency often participates in events like Kwanzaa Fest and Phoenix Fest around the Triangle area. Cozart said the agency also started holding its own “youth expo” event in 2009 to showcase local youth entrepreneurs.

Griffin said the youth expo event was so popular that even Durham Mayor Bill Bell attended. Last year, a seventh grade DJ did all of the music for the fashion show, and an 8-year-old designed outfits for the models. The expo included performances by a 7-year-old rapper and several teenage singers. One middle school student even painted her original nail designs. The next youth expo will be held in June.

Griffin and Cozart encourage other youth nonprofits to set up booths at their event. They said they want children to find their niche and get involved even if it is not through their program. 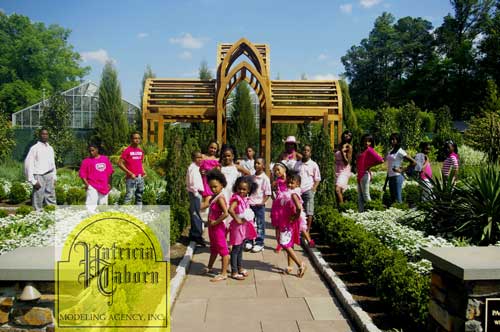 The agency only meets once or twice a month in order to give its members the opportunity to get involved in other aspects of the community. Griffin encourages students to be involved in other activities. J’Quan and Milton are both on basketball teams, and TaTyana runs indoor track and mimes.

“Our philosophy is if you keep them channeling their energy into something constructive, they won’t be destructive,” Griffin said.

The pair is clearly passionate about their work with the youth as they run the agency without any monetary reimbursement. The Patricia Taborn Agency isn’t Griffin and Cozart’s only responsibility — they both also work fulltime jobs. Along with the rest of the staff, the duo freely volunteers their time and resources to the agency.

Because it does not have the funds to maintain a permanent meeting place, the agency meets at Main Library in Durham. The agency plans about two fundraising events a year and recently found a grant writer in hopes of finding more ways to grow the organization.

Last year, the agency had 20 members. But with more funding, the goal is to reach 50 children per year.

When asked about needing more volunteers, both Griffin and Cozart simultaneously responded, “Always.”

Laughing about their identical response, Griffin explained that they need volunteers to help with fundraising and administrative work. They are also looking for people with special talents to lead a workshop for the children.

TaTyana said the organization has readied her for the future and has taught her to act like a professional.

“I would like to be an actress,” she said. “That’s my lifetime goal. So with the workshops about acting, that has really helped me. Acting is about modeling too.”

The agency’s community service has also encouraged TaTyana to help others.

“As a parent, I have seen my daughter just blossom,” Wilson said. “At first she was nervous. She didn’t want to do it. So then the more she became involved she started liking it, trying to find her own outfits that she wanted to wear.”

At the close of each year, the nonprofit holds an awards ceremony to honor their members’ dedicated participation. To keep them engaged in the program and reward their good behavior, the children receive gift cards and coupons to local businesses.

The agency is holding open call auditions on Saturday Feb. 9 between 12:30 p.m. and 1:30 p.m. at Main Library, 300 N. Roxboro St. Anyone from 5 and 17 is encouraged to audition. They are searching for models as well as people with any type of special talent.

To invite the agency to an event, learn more about volunteer opportunities or to enroll your child check out their website or Facebook. 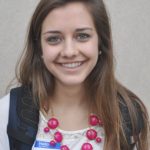