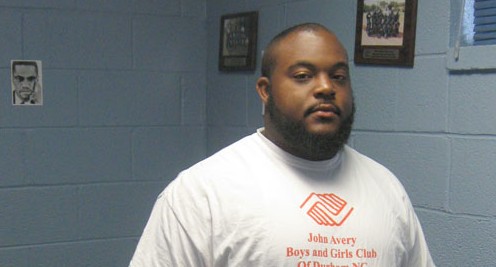 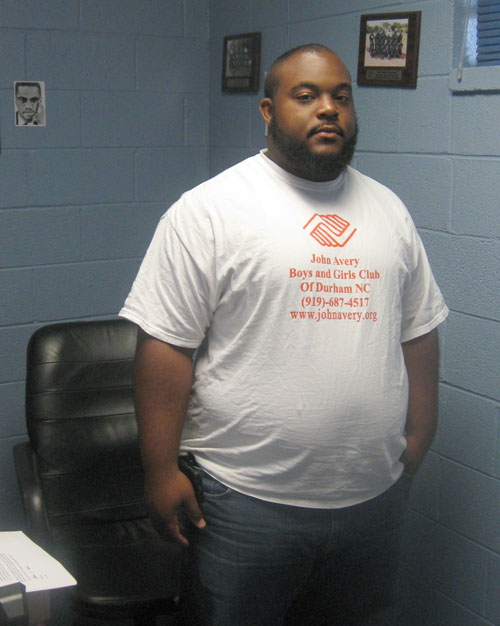 Greg Greene is the John Avery Boys And Girls Club’s unit director and coordinator of the football program, which he helped begin in 2010. John Avery is the only club in the state of North Carolina to have a tackle football team. The Durham Titans practice and play their home games at North Carolina Central University, where coach Greene played college football from 2004-2008.

After sending in the play to the offense of the Durham Titans, coach Greg Greene, coordinator of the John Avery Boys and Girls Club football program paced nervously on the sideline before backing up all the way to the end of the coaching box.

Despite having run the table in an undefeated regular season, Greene’s 11-12 year old club team found in the first round of the playoffs tied 14-14 in double overtime  against a much larger team from Siler City.

At the sight of the Titan quarterback snapping the ball and hurling a pass up to a wide receiver, Greene worried even more. The wide receiver ran a route different from the route his coached called.

But at the last second the player turned and caught the ball in the end zone, which  sent his coach into a frenzy as Greene high-stepped nearly 30 yards down the sideline in celebration.

For Greene, this single play sums up why he does what he does — why he cherishes every moment he works as the unit director and leader of the football program at John Avery Boys and Girls Club in Durham.

“Push through, resiliency, the drive, the will to win, not just sports, but in life. That’s why we do it, that’s why I coach and to see a kid make it, to see my team make it that’s why we started this program.”

A native of Winston-Salem, Greene said he first picked up a football at the age of 6, playing all throughout high school. Though he did not receive any scholarship offers to play in college, he knew he at least wanted to get away from home, and if he still could play the game he had grown to love.

Greene attended North Carolina Central University, where he made the football team as a preferred walk-on, and played both offensive and defensive line for an Eagle squad that won a conference championship in 2005. The team followed that season with an undefeated 2006 campaign, during which the Eagles won another league championship and a black national national championship.

The former Eagle said he still remembers taking the field on Saturdays at NCCU’s O’Kelly-Riddick Stadium, which gave him a taste of the people and city of Durham.

“The community of Durham is impressive,” Greene said. “Durham is extremely supportive. They love Central no matter how Central is doing. I feel like they’re always going to support. Now granted, if you lose a couple games they’re going to let you hear about it. But the following week, they’re still going to be in that seat.”

A degree and five years since he last took the field at O’Kelly-Riddick Stadium as a player, Greene now touches the turf as the coach of the Durham Titans for practice and games. John Avery is the only club in the state of North Carolina with a tackle football program, which Greene helped establish in 2010.

“The football program started literally from the bottom. We started on East End park, where the lights were literally shot out, to now we’re at Central” Fretwell said. “ I never got to play on the turf. I played on the terrible practice field. So it’s kind of surreal to see something that you put your blood sweat and tears into building, and the kids get to enjoy that.

“I’ve seen him make those steps to get us there because football is his passion. He loves it and has put his heart and soul into it.”

John Avery athletic program manager and basketball coach Dexter Jenkins, who was Greene’s roommate for two years at NCCU, commended the unit director’s contributions to club on and off the field.

“We came in around the same time and you immediately saw the passion that he just had for helping youth in Durham period —  not even with just football, but just being well-rounded with children off the field as well,” Jenkins said. “I think he’s doing a great job overall of just leading this club in the right direction. With the football and the unit director position, I think it can be a lot, but he does a great job of balancing and really helping us to become better people as well, even though he doesn’t know it”

For Greene, the football program’s success is not what gets him through each day at John Avery. In fact, if he were told he could no longer coach football, that’s OK, he said.

Because the John Avery Boys and Girls Club’ kids, like the two who’s success he celebrated during that 2012 playoff game, are Greene’s passion.

“If you take football away, John Avery Boys and Girls club is still my heart,” he said. “It’s what I want to do. This is not a stepping stone. I want to be here. I want to retire here and that’s pretty much it.

“At its very core, it’s the kids that keeps me coming back every single day. No matter how terrible your day is, a hug from a kid that only comes to your waist can change a day, real quick.”