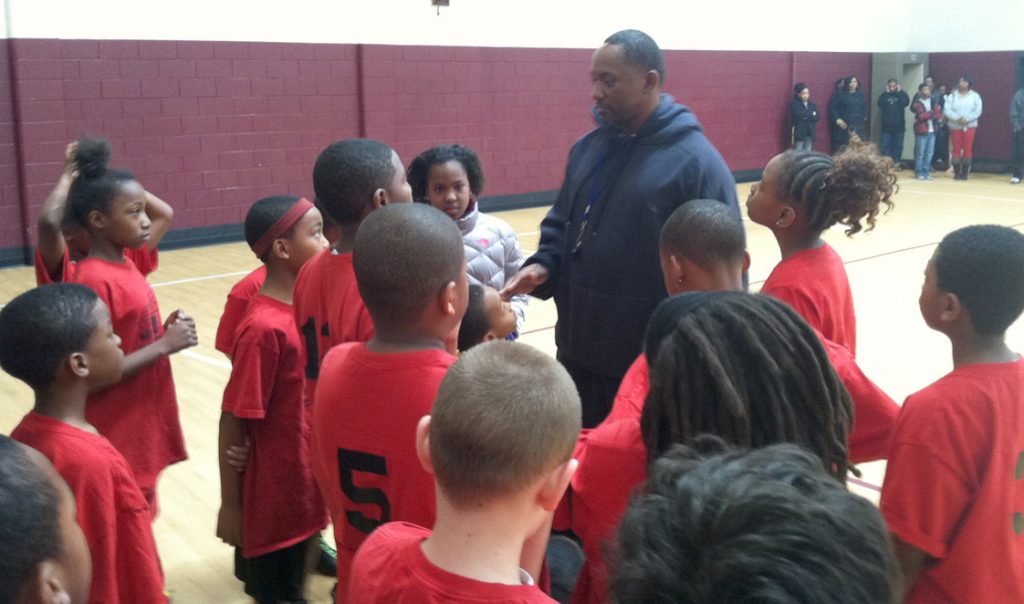 The police officers visiting the Salvation Army Boys & Girls Club were not investigating stolen jewelry on Saturday, March 1. They were interested in a different kind of stealing: the kind that involves snatching a basketball from an opponent’s hands and taking it to the hoop.

Master Officer Erwin Baker serves as a referee for the Durham Police Athletic League, which partners with local schools without formal athletic programs to give students the chance to play on a team. He has been working with the league since its inception in 2010.

“The goal for doing PALs in the first place is building a relationship in the community,” said Baker, 51.

Students from area elementary schools meet on the court every Saturday from Feb. 1 to March 15, and they all come ready to play. Teachers and officers coach the teams, which are divided by school.

“Each school represents a team,” said Curtis Walker, a teacher at C.C. Spaulding Elementary School. “We are able to get together here and give the students something that goes beyond the classroom.”

Walker, 40, has been involved with the PAL since 2010, when the Durham Bulls Youth Athletic League contacted him about heading his school’s program.

Antoine “LeVar” Thompson, from WG Pearson Elementary School, enjoys serving not only as his players’ coach but also as their fifth-grade teacher.

“This program gives students who wouldn’t normally have the opportunity the chance to get on the court and play,” said Thompson, who has been coaching for three years. “It doesn’t discriminate against different levels and abilities. It teaches the kids sportsmanship and how to work together as a team.”

Thompson said there are many benefits to working closely with the police department for his students.

“It changes their perception of policemen,” he said. “The policemen become people they’re familiar with.”

Baker said he also understands the positive effects of working with the schools through the PAL.

“I like the fact that children get to see us in a different light, doing stuff we normally do,” he said. “Other stuff like arresting people, taking them to jail, that makes up a very small part of it. Helping people is most of what we do.”

Mekhi Archer, a third-grader at Eastway Elementary School, paused after his game against Merrick-Moore Elementary School to catch his breath. His father, Michael Archer, was waiting to greet him on the sidelines.

Michael Archer, 27, is a New York native who hopes his son will go to Syracuse to play basketball.

Mekhi, 9, was born in Durham and has been playing with the league for two years.

“I like passing and playing defense,” he said. “I like hanging out with my friends on the team.”

Mekhi dreams of following in the footsteps of his favorite player, Kevin Durant, by playing for the Oklahoma City Thunder.

Mekhi’s dad was not the only fan to show up. Families and friends of players filled the bleachers, and there was standing room only by the end of the day.

Joyce and Tajā Wilson were there to cheer on Demetrius Allen, 11, Joyce’s brother and Tajā’s uncle.

“He’s been playing ball since first grade,” said Joyce Wilson, 30. “I love it that he gets to do what he loves. He gets to play the sport he loves.”

Tajā, 9, is also involved in the league. She plays soccer through the program in the fall. The PAL offers different sports from season to season.

“I like soccer more than basketball,” Tajā said. “It’s faster and you get to run around more.”

Regardless of the sport, the PAL is about much more than who wins or loses. It is more than the game itself. It is about bringing students from different parts of the community together and celebrating the bonds they share.

“It’s the relationships we build with the people in our community,” Baker said. “We are really making a difference in the lives of these children, and that’s what it’s all about.”

Zach is the Co-Editor of the Durham VOICE and a UNC-CH journalism major.