In the four years Justine Lyon has played basketball at Hillside High School, she has scored more than 1,000 points, captained the Lady Hornets and earned a 3-star rating from ESPN scouts—all while keeping a GPA above 4.0. 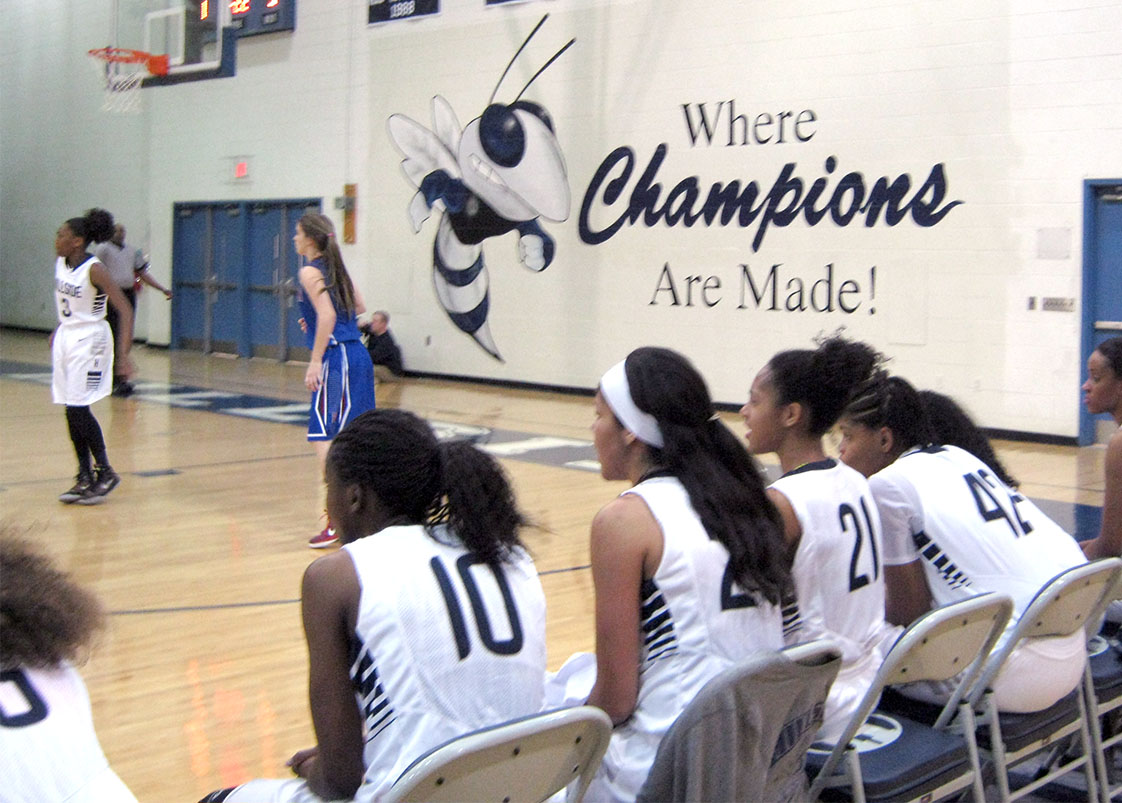 Justine Lyon (10) looks on from the bench, encouraging younger players, during a blowout win against Person High School.(Staff photo by Max Miceli)

But after this season, Lyon will be gone and off to college. Playing her last regular season home game against Person High School, Feb. 13, Lyon was honored with all the other graduating seniors.

“She’s been an outstanding player,” Coach Ovester Grays said. “When your senior leaders show that kind of discipline off the court, it translates to a lot of success on the court.”

It’s not over for Lyon though. She’ll be taking her talents, as a baller and a student, to Davidson College where she will continue her playing career with fellow senior Mya Webb in the fall.

“The academics,” Lyon said. “Of course that’s number one on my priority list.”

What will come of the Lady Hornets once Lyon and other seniors are gone remains to be seen.

While the team will keep talented players like Elisia Grissett, who is the team’s second leading scorer, Lyon’s effect on the team is more than just about the numbers she puts up. As a leader and as a student she sets a tone for the team.

A tone that starts with academics and ends with discipline.

“Any time you’re older or you’re in a leadership position… you’re going to have younger people who look up to you,” Lyon said. “You want to set a good example.”

According to Grays, Lyon and her fellow seniors have done a pretty good job too.

“We’ve always had great player,” Grays said after Hillside’s 68-20 senior night victory. “But our seniors have always had an influence on our youngsters.

“And when a senior brings those kinds of values to the table… it gives them someone to emulate.”

Grays said that the core values that Lyon has brought to the table for the Lady Hornets translates from the court to the classroom and to just about everything she does.

While she will be missed, the excellence she’s achieved will not be forgotten.

“She gets good grades in class and she works hard on the court,” Grissett said. “That pushes and encourages everybody else to work hard on and off the court.”

To Grays, the message that ‘it can be done’ might be Lyon’s most valuable asset to the team.

“It’s not this fantasy that us adults and coaches talk about,” he said. “Our kids learn more from our kids than they do from us.”

With three regular season conference titles and a few deep runs in the state championship tournament, Lyon is hoping to make one final push to win it all before she leaves.

But even if she can’t leave her school with a championship, at the very least she will have left the school with a few wise words.

“Education will open up a lot of doors,” Lyon said about what she hopes young players have learned from her. “A lot of opportunities I’ve gotten I wouldn’t have even had if my academics weren’t good.”

Max is a UNC-CH senior broadcast major from High Point serving as sports editor of the Durham VOICE.