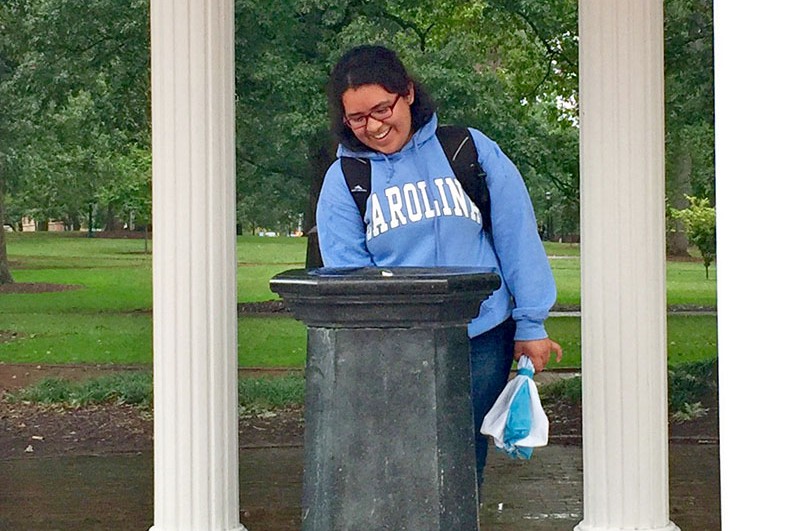 Martinez takes her first drink at the Old Well since her arrival to UNC-CH in 2012.

Vianey Martinez takes her first drink at the Old Well since her arrival to UNC-CH in 2012. She is the only member of her graduating class at Southern High School to be admitted to UNC-CH. (Staff photo by Anna Williams)

Martinez, a 21-year-old senior who is majoring in sociology and Hispanic linguistics, grabs shelter from a downpour at the Old Well.

She is the only student from her graduating class at Southern High School to attend UNC-Chapel Hill.

But before she became salutatorian of her high school class, with offers of admission from multiple colleges and dreams of graduate school, she was a fourth-grader coming to a new country, without the ability to speak English or the knowledge of how to even apply for college.

“My dad migrated first,” says Martinez. “He used to come and work in the U.S. for months at a time and then come back to Mexico to visit me and my mom—but it was dangerous and it started to get a lot more dangerous.”

Outfitted in a UNC-CH sweatshirt, T-shirt and umbrella, Martinez explains the repercussions of the decision her parents made to move the whole family to the U.S., where she was immediately immersed in a culture very different from her own.  while walking towards Murphey Hall she says that even school, where she had always excelled, became more challenging because of the language barrier.

“I felt very incapable,” Martinez says of her first few months in the U.S. public school system. “I wanted to go home.”

But instead of giving up, she worked harder and continued to make good grades.

“In my home you didn’t bring home anything below an A. My parents got to the point where they didn’t even check my report cards because they knew,” says Martinez.

On top of making good grades in high school, Martinez began to get involved in community projects like the Durham-based community garden SEEDS and the Emily K Center. She talks rapidly with excitement while crediting these local organizations for instilling in her much of the passion she currently feels for her future.

“Recently I was talking to a woman who worked at an organization in Durham about my involvement with organizations,” Martinez says with a laugh. “And she was like, ‘Oh, you’re like a ‘community baby,’ and I thought it was funny the way she described me because I realized that a lot of the things that I’m passionate about or the things that have made me who I am have come from community organizations.”

She explains that the different educational experiences available in her community helped her in a way that school could not provide.

“I don’t feel like within the school I felt empowerment — a lot of it happened in the community,” says Martinez. “Santos Flores from SEEDS is definitely one of the people I think of when I think of someone that empowered me and that I look up to because he opened my mind to question and wonder a lot of things that I would have never thought about otherwise.”

Hanging out in Murphey Hall

Martinez, who sits comfortably at a table in an empty classroom, explains how she sought help from the Emily K Center for college applications during her junior year of high school. They assisted her with guidance on how to take the SAT, where to apply to college and how she could get some sort of financial aid. 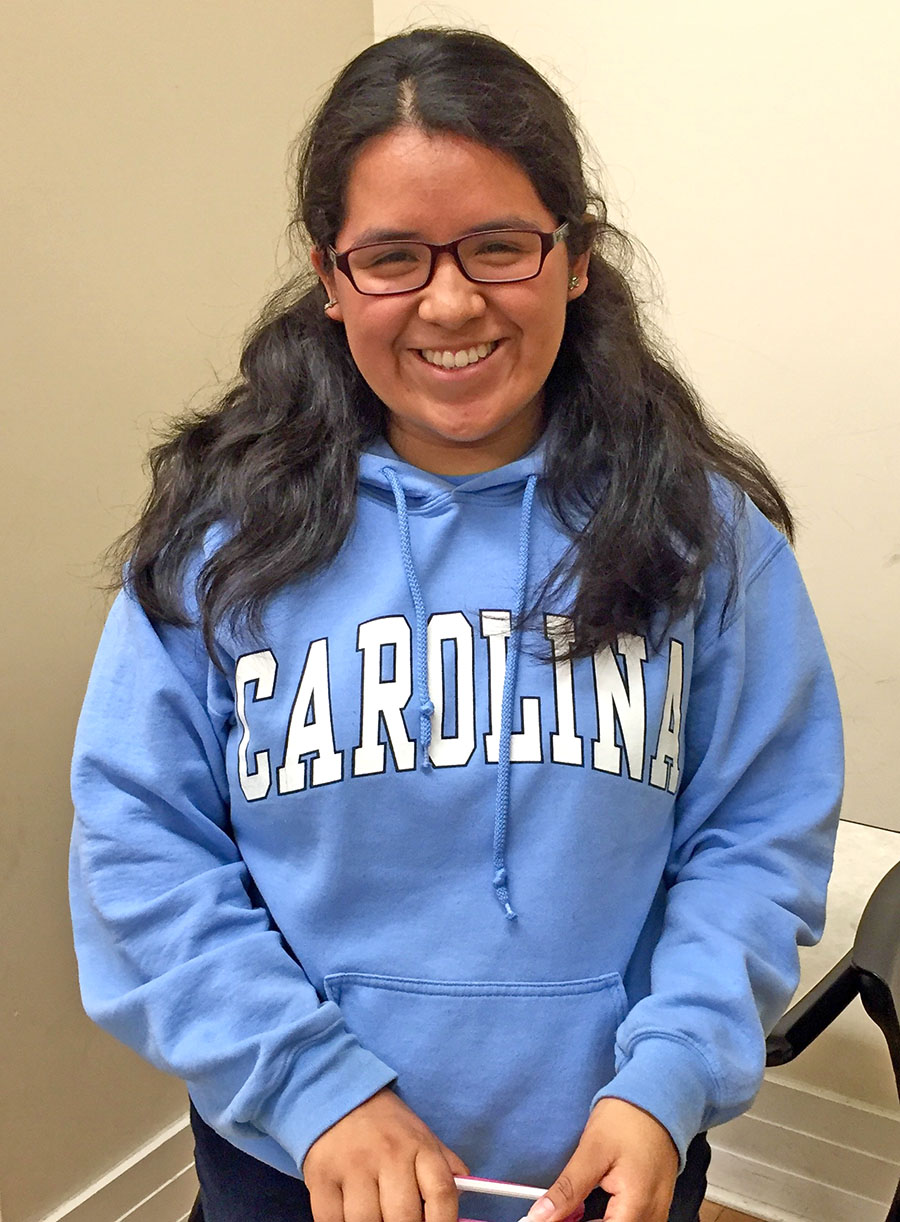 “Community organizations like SEEDS opened my mind to wonder and question a lot of things— they made me who I am,” says Martinez, who is majoring in Sociology and Hispanic Linguistics at UNC-CH. (Staff photo by Anna Williams)

“They were huge advocates for me and my education,” says Martinez.

Martinez is currently applying to work for Teach For America after graduation where she hopes to be a positive academic influence on those who need one.

“In my class I had a TFA corps member as an english teacher,” says Martinez. “She really pushed me and believed we had potential — some teachers just don’t show that.”

Martinez’s eyes light up as she smiles and says she plans to use all of her experiences to help other students in the same way she was helped.

“I think the difference a teacher can make can be huge,” says Martinez. “I would like to empower students in my community the way many have empowered me.”

Anna Williams of Wilmington, a senior majoring in journalism at UNC-CH, is serving as a writer-photographer for the VOICE.