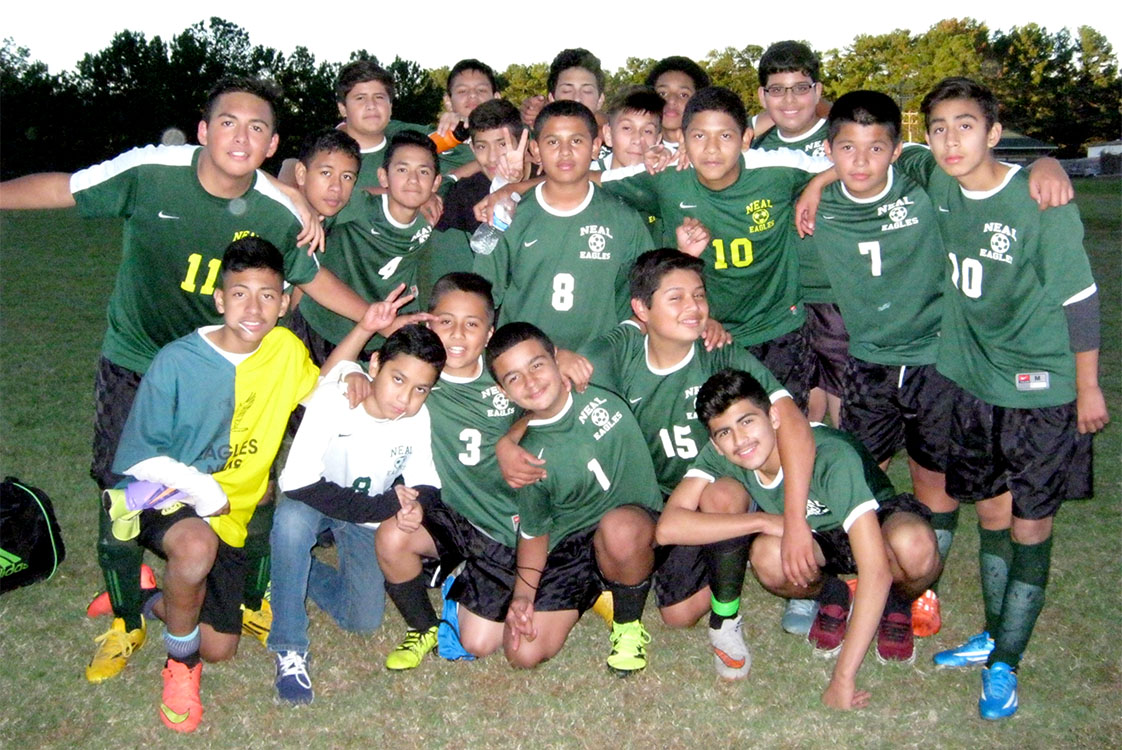 Neal Magnet Middle School’s soccer team calls themselves more than a team. They yell “familia” at the top of their lungs even after running drills for their coaches and an overtime tied game. (Staff photo by Sarah Kaylan Butler)

The mission, as set by co-athletic directors Sam Young and Kathryn Regalado, was to cultivate school spirit and raise funds for the 2016-2017 athletic year’s athletic department.

“I’m a little bit nervous, because if you miss the ball, the pressure is all on you,” Yori Mouzon, an 8th grade student at Neal Magnet Middle School, said before she played her last volleyball match of the season. 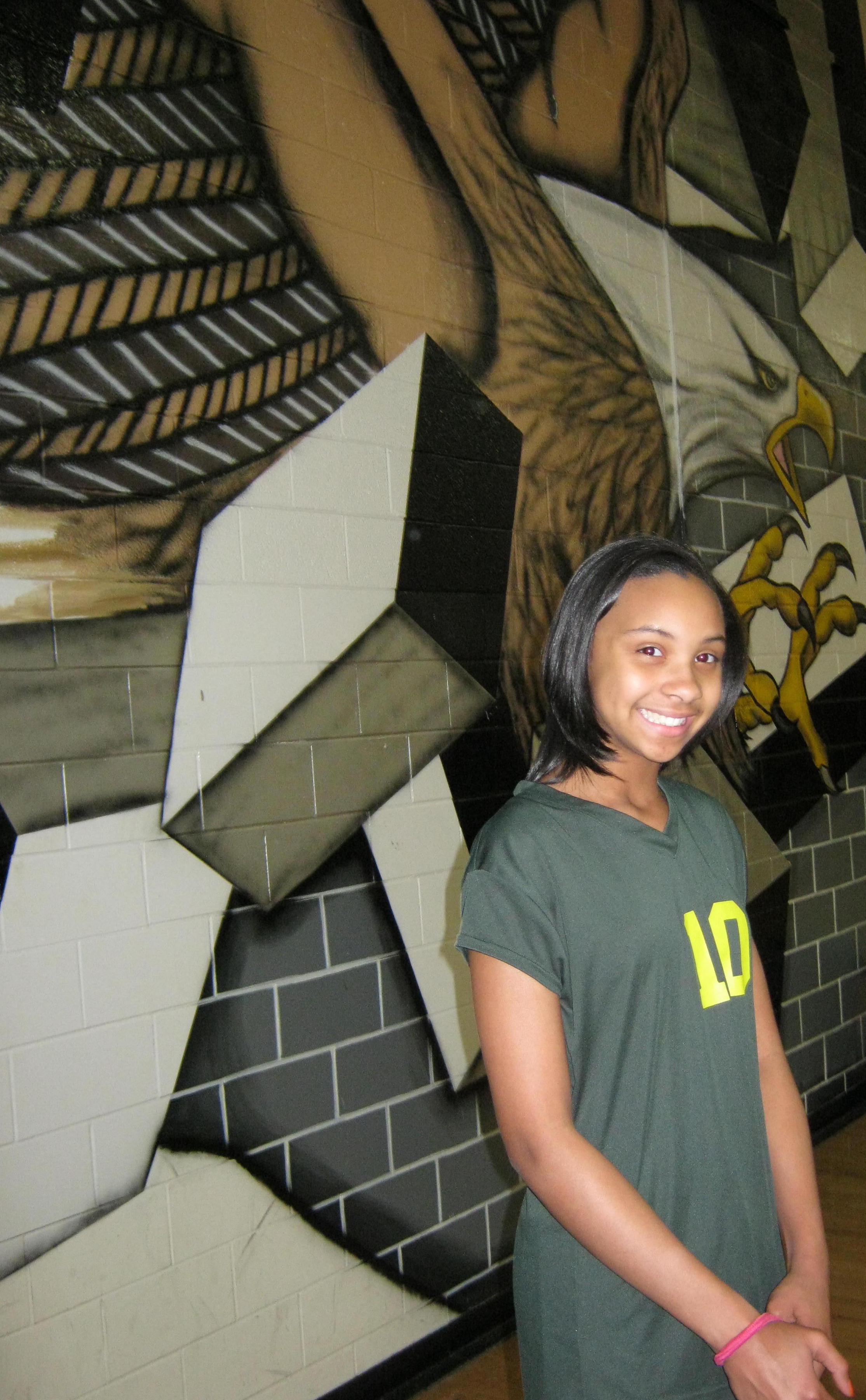 “Honestly, I’ve always been like a cheerleader girl, but I wanted to try something different that was out of my comfort zone,” Yori Mouzon said. (Staff photo by Sarah Kaylan Butler)

Mouzon and her teammates practiced approaching and attacking the ball before the game.

Huddled together, the team listened intently to their coach with the image behind them of their school mascot — the eagle. The paint on the gym wall read, “Just Can’t Hide that Eagle Pride.”

“Hey, ladies, you should be loud and proud!” Regalado, who’s also the volleyball coach and social studies teacher, said, encouraging her “lady Eagles.”

Regalado serves as one member of a team of teachers who give their time to coach volleyball, cross-country, football and soccer teams.

Regalado said she’s seen her volleyball team improve this year even though they haven’t won as many games as they’d like.

Megan Edwards, the cross-country coach and math teacher, said, as an onlooker, she agreed with Regalado.

“Our games last longer,” Edwards said. “They don’t last five minutes, and we don’t get killed any more.”

The Eagles’ football team has also experienced growth. The students and teachers believed in their football team this year and the players came through for them with only one loss the whole season. During the previous year, the team had three wins and four losses.

On the day of the season-end cookout, the Eagles’ football team beat Sherwood Githens Middle School, 26-6.

The volleyball team ultimately lost the set, 2-3, but for Mouzon, it didn’t feel like a loss.

“But I’m still proud because we did play really good. For me, this was the best game,” Mouzon said.

“The kids are doing well. It’s the last game of the season, and at this point we don’t really have a chance to go to the tournament, but we talked to the team yesterday about just playing well and making sure you win the last game of the season,” James Shafto, one of the boys soccer coaches and math teacher, said. “And that’s what they’re doing. They’ve done really well. They’ve played really hard.”

After the soccer game, the coaches kept the athletes focused and hyped by running a few drills to create a team attitude. They ended their sets of push-ups by proclaiming they are “familia” and Eagles.

Carlos said he practices two to three hours a day. When he doesn’t feel like playing, he said, “I just still play. I don’t stop.”

The Eagles’ cross-country team qualified to compete for the first time this year and, on the day of the cookout, it won by default after the DSA Bulldog’s forfeited.

Edwards said the runners weren’t happy that they didn’t get to compete, but they didn’t let it get to them since it wasn’t their final meet of the season.

“They were upset, they kind of joked around that they won at least, so they had a good spirit about it,” she said. “If we weren’t going to the tournament, I think it would have been more devastating.” 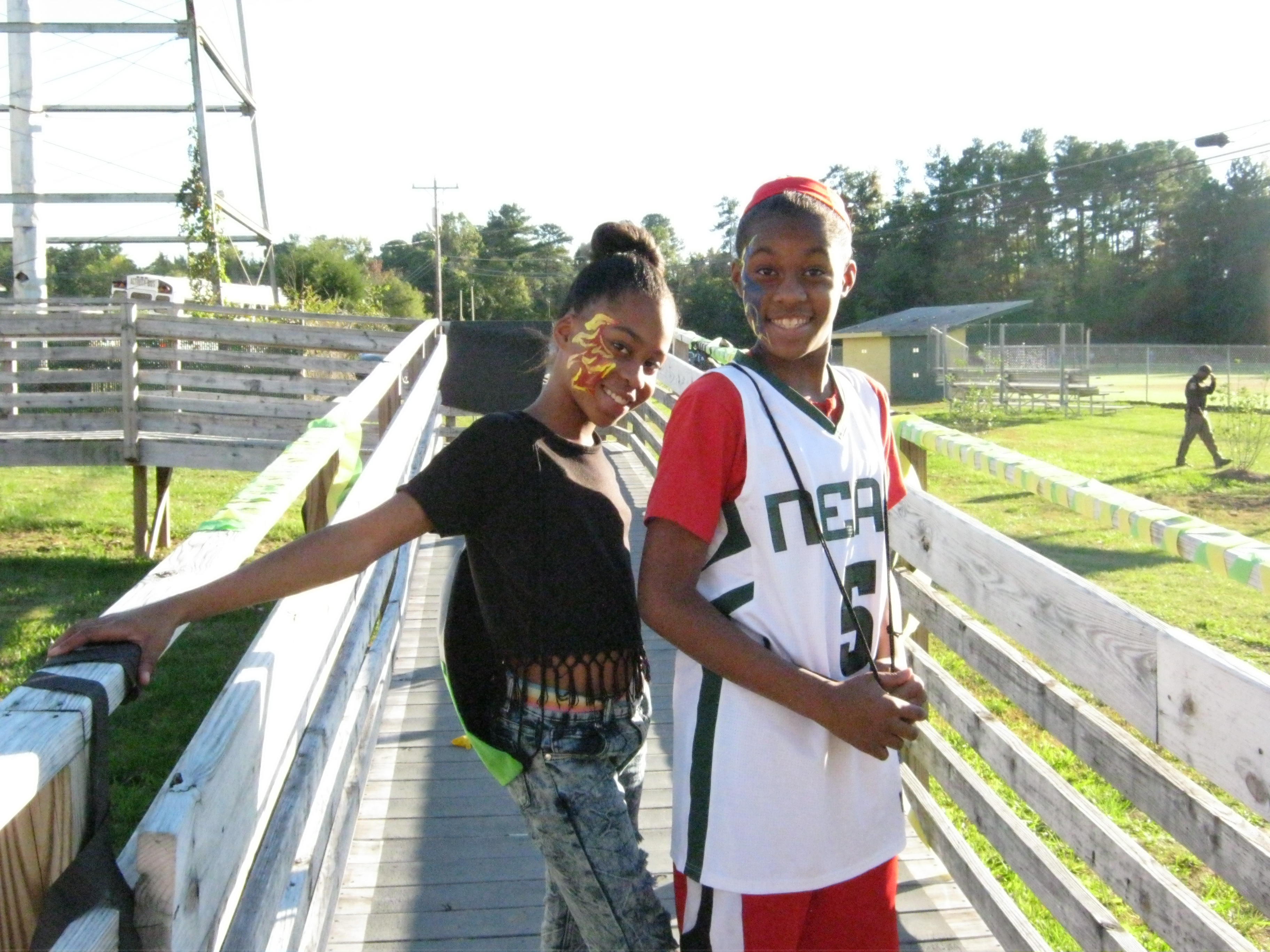 Regalado said the athletic department needs more funds than are provided by the county to be successful.

“Our budget is enough for us to function,” she said. “It’s enough to pay the referees, but not for uniforms, etc.”

Sam Young, a co-athletic director, social studies teacher and boys soccer coach, said, that if they don’t raise extra funds, the department starts the year with a deficit.

Regalado said “even though there were some hiccups,” this was a first-time event and it was successful.

Gorman Student Ministries provided the food for the cookout and free face painting, too. They blasted music from artists like Family Force 5 and Andy Mineo.

Gorman Baptist Church youth pastor Andrew Cannon said he and his wife want to communicate love to the students. They said they helped “just to get to know the kids and hang out with them so they know we care about them.”

At the end of the evening, the student-athletes were given awards to honor them for their participation throughout the seasons. 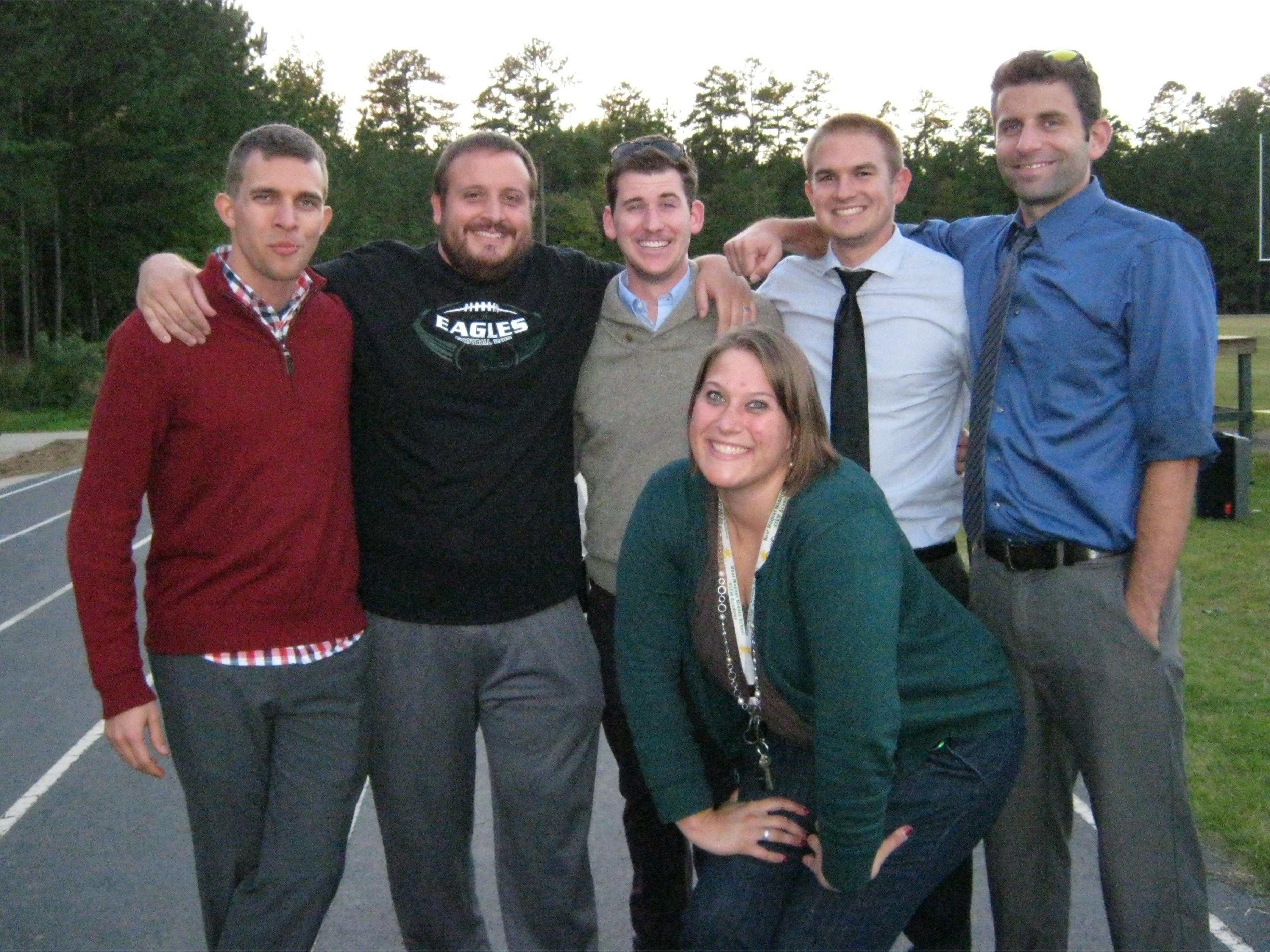 Young, a co-athletic director, said sometimes teachers get sucked into coaching without a previous desire to do so, but that once they coach once they never want to give it up.

He said he has a lot of fun leading the athletic department alongside Regalado. In fact, they like to merge their names into “Youngalado,” which they compare the to “Brangelina.” The most important thing isn’t the sport; he says it’s the relationships.

“The amount of relationship building that you can do with the kids on your team is unreal,” Young said. “It helps in the classroom — it helps out of the classroom.”

Sarah Kaylan Butler of Fayetteville, a senior reporting major at UNC-CH, she served as a writer-photographer for the VOICE during the fall 2015 semester. She is now serving as the editor at large for the Durham VOICE and the Carrboro Commons.