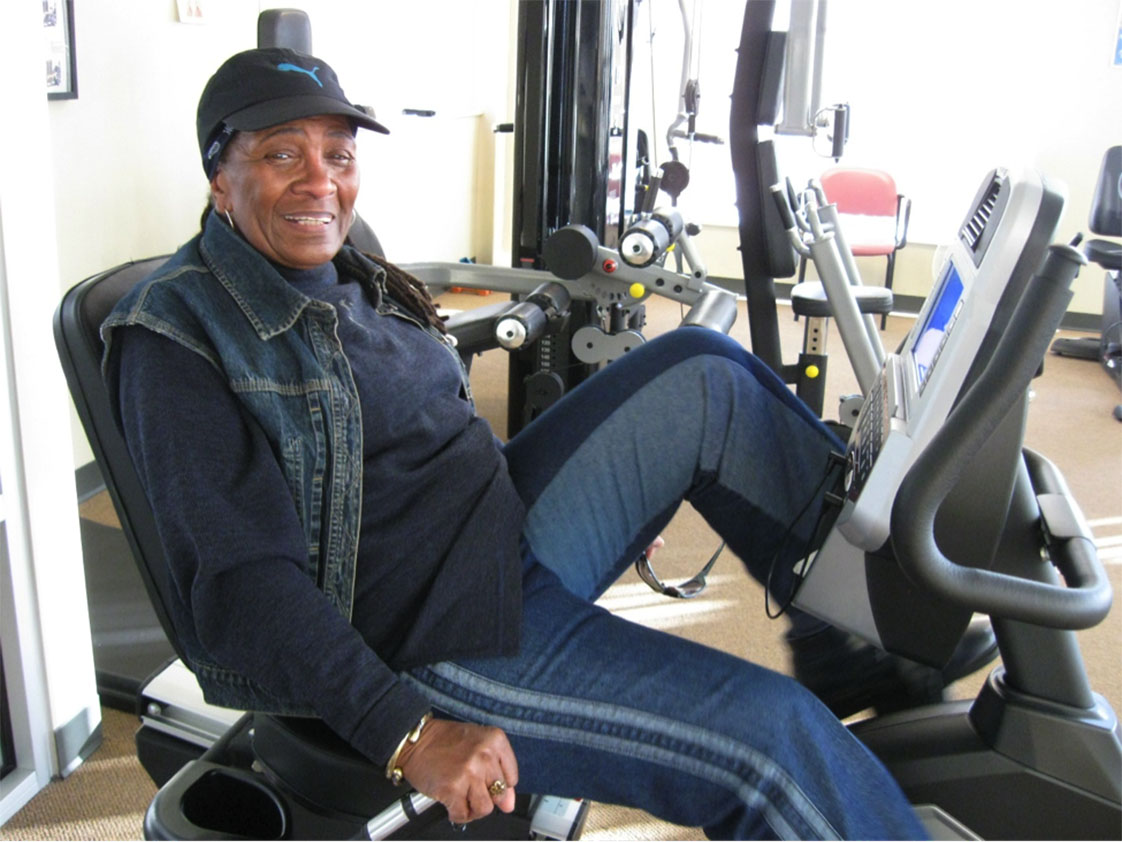 Durham resident Freyda Barton spends some time cycling in the center’s gym facility. She is extremely active and uses DCSL for its most basic service: exercising. (Staff photo by Travis Butler)

Since 1949, the Durham Center for Senior Life (DCSL) has served the elderly community of Durham. Though it has seen its name changed twice over the years, DCSL has never given up on enhancing the lives of seniors in the community, according to Liz Lahti, director of senior programs at DCSL.

DCSL is an independent nonprofit organization that is as vital a resource to Durham as it was 50 years ago. Not only does the center provide meals, transportation, exercise classes and many other services, but it also serves as a second home for many seniors in the area, says its members.

Durham resident Anne Marie Brace comes to the center almost on a daily basis. She often thinks about how important the facility is to the community.

“It is absolutely necessary. A lot of people don’t have anywhere else to go during the day. So this is like coming home for them,” she says.

Brace said that in addition to helping the senior population of Durham, DCSL also assists with the homeless members of the community.

“A lot of people are homeless and they live in shelters,” she says. “During the day, they have to leave those facilities, and it’s great that they have somewhere to come.”

The homeless can take advantage of the same opportunities as the seniors at the center, such as free meals and a plethora of fun activities like dominoes and card games, according to Brace.

Of course, DCSL provides the most basic of services to seniors: an exercise facility. Freyda Barton, a frequent visitor of the center, says that it is a very significant part of her life because of its place in her daily exercise routine.

“I don’t know what I’d do without this center. I think it’s a good place for us seniors to come and stay healthy,” she says.

Barton believes that staying active can be a good way to delay the aging process.

“There is so much they [seniors] could enjoy and so much they can do because a lot of people just sit at home and deteriorate,” she says with a smile. “I think coming here makes you deteriorate a little more slowly.”

Barton’s friend, who gave only her first name, Gloria, also comes to DCSL for a very simple reason: to relieve stress.

“I love this center. I have four grandchildren and I raise them all by myself,” she says. “It is a nice break. A break from all the stress.”

DCSL also allows members of the community to use its research lab that consists of about a dozen computers. Unlike a library, people are not given just a few minutes to use the Internet. Cheryl Hill, a new resident of the Durham area, says she comes to the facility mainly for that reason. She uses the computer to conduct job searches, making the center an important part of her life.

DCSL is so vital that many were very frustrated when it was closed for three days this past week for inclement weather. Hill was among those upset, and she believes the city needs to make the center more of a priority.

“I think it’s important for people to get to a facility like this. So I think the priority should go up for plowing near this location,” she says.

The Durham Center for Senior Life is and has long been a staple of the Durham community. It provides a wide array of services to the elderly population of the city. And like the city, it has grown and seen improvements over the past several decades.

“I think a lot of residents have seen Durham go from a dying town to becoming revitalized,” Hill says. “I’m glad this has been part of the revitalization.”

Travis is a UNC-CH junior journalism major from Wilmington serving as a staff writer for the Durham VOICE.