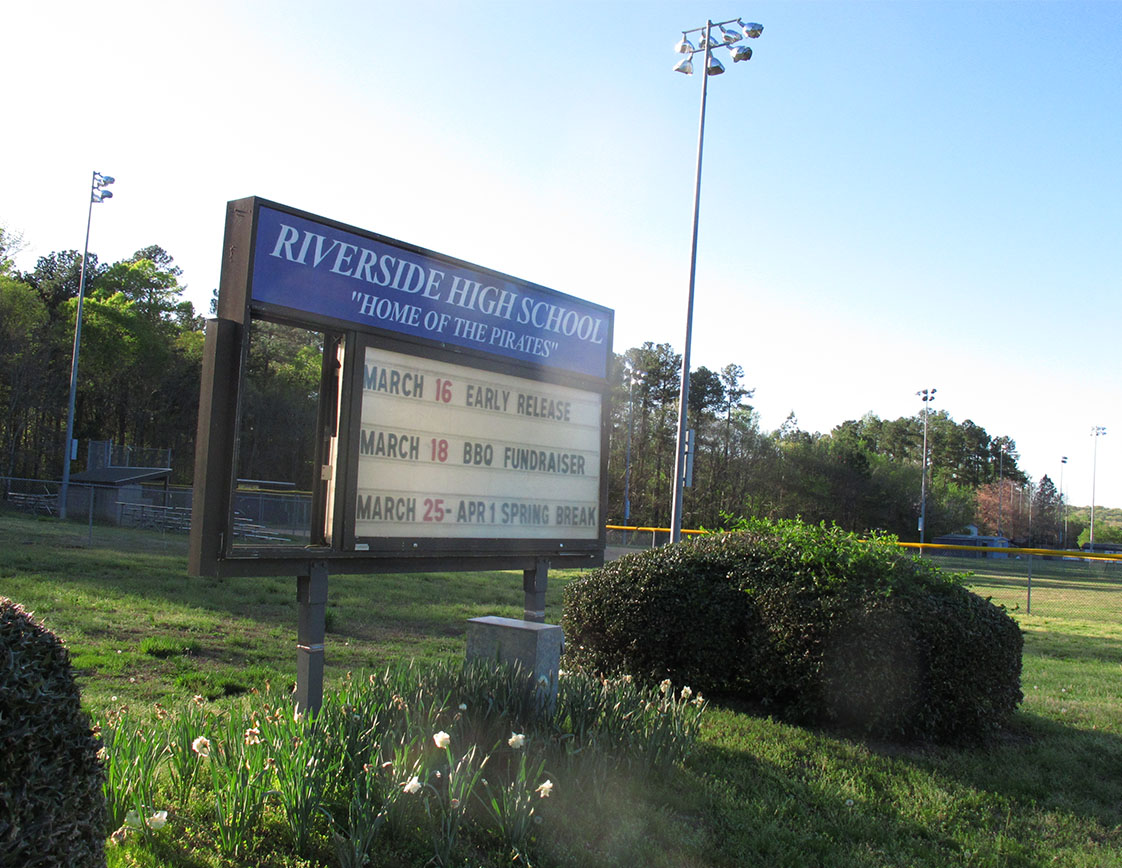 The Riverside High School and its surrounding community has been rocked by the arrest and possible deportation of senior Wildin Acosta in January. (Staff photo by Bradley Saacks)

Imagine the everyday burdens that accompany being a high school student —stress about grades, social anxiety of puberty and looming college admissions.

For many, the idea of returning to high school is cringe-worthy, but not for 19-year-old Wildin Acosta.

Acosta, a senior at Riverside High School on Rose of Sharon Road, is not fighting to make the honor roll or a spot on the soccer team — he is fighting to stay in the country.

The (Raleigh) News & Observer and others reported that U.S. Immigration and Custom Enforcement officers detained Acosta, a Honduran native, on Jan. 28 when he was leaving to go to school.

Acosta came to the United States when he was 16 years old with a flood of undocumented Central American minors who were fleeing gang violence in their countries, according to media reports.

A recent effort by the federal government has focused on individuals who overwhelmed border patrol and immigration services a couple of years ago. According to a release by the Department of Homeland Security, more than 100 individuals in situations similar to Acosta’s were arrested in North Carolina, Texas and Georgia in January.

Teachers, friends, family members and local leaders have decried the actions of ICE for targeting teenagers trying to get an education.

“There is a real fear that the raids will continue, and we will lose more members of our school community,” said Ellen Holmes, a Spanish teacher at Riverside who knows Acosta personally.

The Durham Public Schools system passed a resolution asking for the raids to stop, but cannot offer much more protection beyond that action, Chief Communications Officer Chrissy Deal said.

The system, Deal said, does not track which students are undocumented in its schools.

Deal said the school system does not have the resources to provide legal help for students with situations similar to Acosta’s, noting that the system “doesn’t even have an attorney on staff.”

Acosta, Holmes said, came to the country to “achieve the American dream.”

“He dreamed of graduation and going to college to become an engineer,” she said.

His removal from the Riverside community has been difficult on several levels.

“To see the fear in my students’ eyes for their friends, family and themselves has been very hard,” Holmes said. Daily, students ask her for updates about Acosta and when he is coming home, she added.

“Taking away someone’s right to an education, putting them in prison and treating them like they are not a human being is hard to understand as well,” Holmes said. “I feel helpless a lot of the time.”

The increased attention ICE is paying to students has enraged the community. According to media reports, several protests were held after news of Acosta’s arrest leaked out, where people chanted for “education not deportation.”

Kristen Gardner, a UNC-Chapel Hill student who is studying the undocumented population’s access to education, said just because an individual is undocumented does not mean he or she loses the right to an education.

“A lot of high school counselors are in very difficult positions because they need to advise them on the best path for their educational future as well as their safety,” Gardner said. She created a petition last year for the Morehead-Cain Scholarship at UNC-CH to accept applications from undocumented students.

There has been increasing support for creating safe avenues for undocumented students to pursue their educational dreams. Several states with large undocumented populations have allowed those students to pay in-state tuition at state colleges.

When visiting UNC-CH last month, new UNC system president Margaret Spellings was asked if a similar policy could be implemented. Spellings did not guarantee anything, but her response conveyed the positive results that this policy has had in her home state, Texas.

But all of this progress means nothing to Acosta’s friends and family as long as he is detained. U.S. Rep. G.K. Butterfield, who represents North Carolina’s 1st District that includes Durham, pushed the leader of ICE to postpone Acosta’s deportation until he could appear before an immigration judge.

“It is my hope that he will eventually be granted asylum in the United States,” Butterfield said in a statement.

Acosta is currently being held at the Stewart Detention Center in Lumpkin, Georgia, while he waits for his case to be heard.

“I do not know if I can put into words how hard this whole situation has been for all of us,” Holmes said. “It is so unfair and so unjust.”

Bradley is a UNC-CH senior reporting and Spanish major from Cary. He is serving as a co-editor of the Durham VOICE.