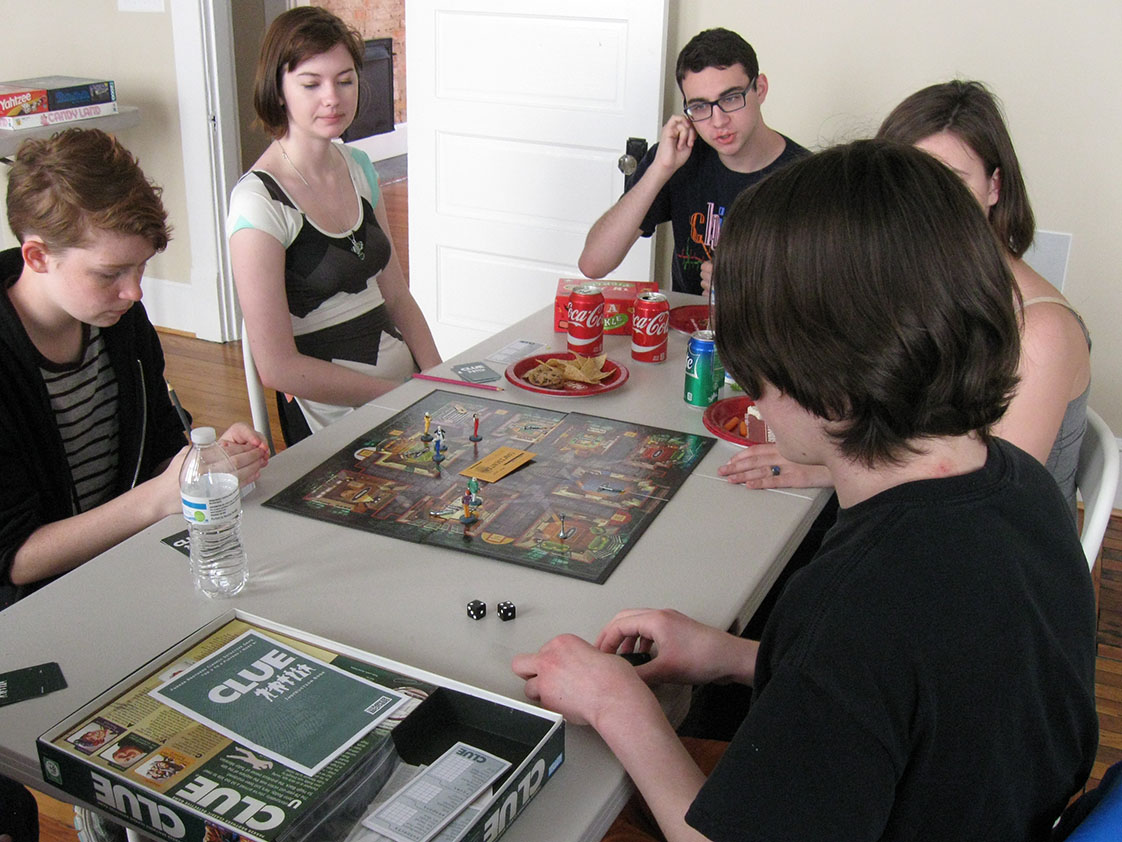 Spencer May, Megan Moomaw, AJ Goren, Heaven Kelley, and Kels McAdon are all playing their last game of Clue as Ga(y)me Day starts coming to an end. (Staff photo by Candice Craig)

Durham teens have responded to House Bill 2, better known as the “bathroom bill”.

“Durham was one of the most progressive cities in North Carolina, as far as extending rights to the LGBTQ community,” said Nick Buchser, a youth programs coordinator for Raleigh’s QueerNC. “HB2 took away all of that.”

With House Bill 2, or HB2, transgender people who have not taken the surgical and legal steps to change the gender as it is on their birth certificate have no legal right to use public restrooms of the gender with which they identify. HB2 redefines the classes of people who are protected against discrimination and sexual orientation is not protected, according to the Charlotte Observer.

“It’s a disgusting bill that affects a lot of people,” said Kate Kushner, 17, a junior at the North Carolina School of Science and Mathematics. “It affects more people than most people assume it would.”

Public school students are one of the largest groups most affected by HB2,according to PBS’s news website. . Students spend most of their day in school where they are now prohibited from using restrooms that do not correspond to the sex listed on their birth certificates.

On April 16, a Saturday afternoon, Kushner and a group of seven other teenage students got together for “Ga(y)me Day” at the LGBTQ Center in Durham. The students had snacks, played board games, and made crafts like collages and bird feeders while simultaneously having small talk and serious discussions about issues dealing with the LGBT community.

“This event is a networking event,” Buchser said. “It’s a way for teenagers to reach out and find other teenagers they can feel comfortable relating and talking to.”

QueerNC was founded by youth in June of 2012. In their mission statement they state that the organization was inspired by the need for an easily accessible program that was catered specifically toward the lesbian, gay, bisexual, and transgender youth in North Carolina, according to the QueerNC website.

“Everything is youth led,” said the LGBT Center of Raleigh’s executive director James Miller. “It can be difficult for these teens to find resources and support, so we provide that and a way to meet other queer teens.”

Kushner is a member of QueerNC’s youth leadership team and plays a large role in organizing their Durham events, such as the “Ga(y)me Day” event.

The goal of QueerNC is to provide a safe space both online and in person that connects youth in all areas of North Carolina where they can talk, find resources, and get help with any of their problems. The organization also helps educate youth on issues in the LGBTQ community, such as HB2. They motivate the youth that they talk to create a positive change back home in their own communities, according to the QueerNC website.

“I have a lot of fun doing these events,” said Kels McAdon, a student at Northern Durham High School. “I can really be myself here and I’m able to comfortably talk to people.”

Kushner said the group is planning another networking event, a picnic in May at the LGBTQ Center in Durham.

Candice is a UNC-CH senior broadcast journalism major from Gastonia serving as the teen mentoring coordinator for the Durham VOICE.