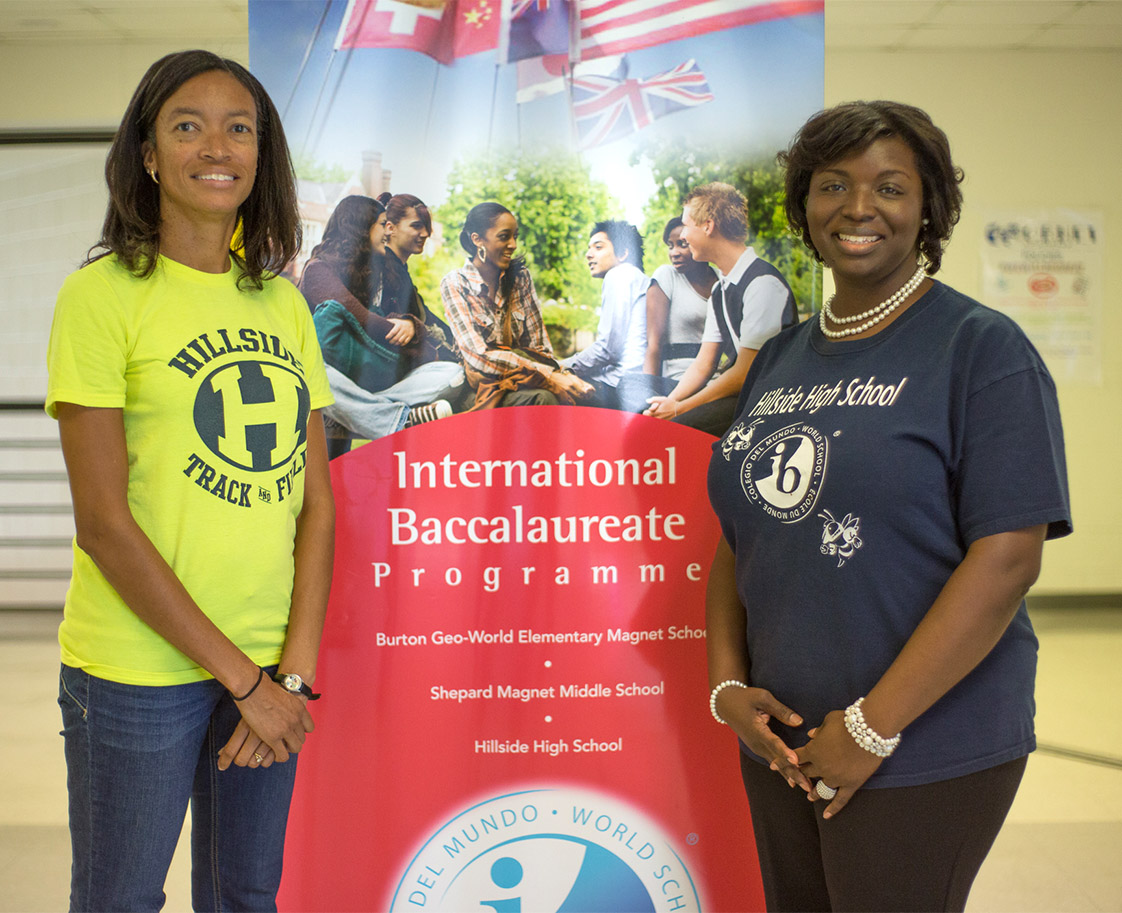 Euba McKoy, the I.B. Diploma Programme Coordinator at Hillside High School, and Keshetta Henderson, I.B. Middle Years Programme Coordinator and teacher of English and I.B. Theory of Knowledge, pose for a portrait in front of a banner advertising the I.B. Programme on Sept. 30th, 2016. Theory of Knowledge is a philosophy class where students learn about nature of knowledge and what it means “to know” something. (Staff photo by Rob Gourley)

There is a magnet program at Hillside High School that nearly guarantees its students will go to college, according to the program’s coordinator.

The International Baccalaureate Programme, or I.B., at Hillside High School uses a college prep curriculum taught at schools all over the world. And Diploma Programme Coordinator Euba McKoy says 100 percent of her graduates go to college each year.

“All of our students graduate,” McKoy says. “All of them go to college.” 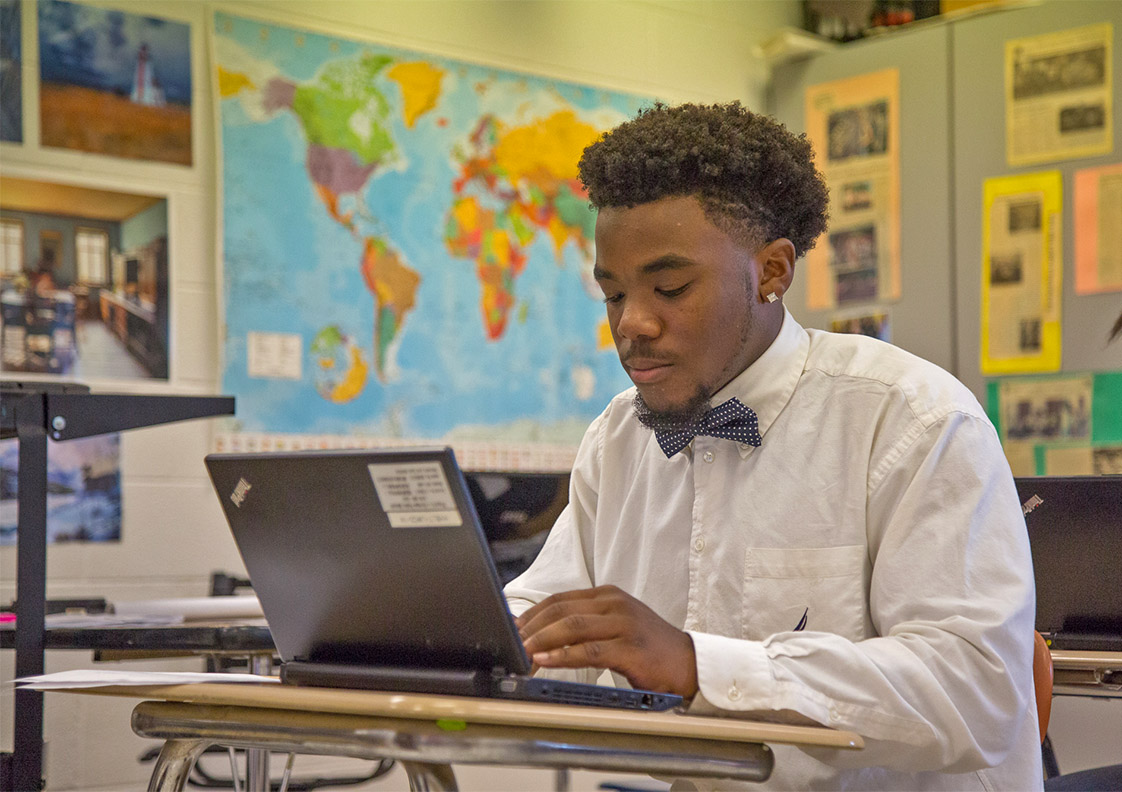 Deion Williams, a senior in Hillside High School’s I.B. Programme, works on college essays during English class on Sept. 30th, 2016. He is dressed-up because he plays football, and team members dress nicely on the day of a game. (Staff photo by Rob Gourley)

Not only do all of them go to college, but these students also go to some of the best schools in the state and country, Keshetta Henderson, I.B. Middle Years Programme Coordinator, says.

“Over the years, it has been Dartmouth, Harvard. Of course, then there come schools like Carolina, A&T, Duke,” Henderson, who also teaches English and I.B. Theory of Knowledge, says. “There has been a variety — there’s been Ivy League schools as well as H.B.C.U.’s (Historically Black Colleges and Universities) and predominantly white institutions.”

The I.B. Programme at Hillside began in July 1997 when the school was accredited by I.B., the international organization that creates the curriculum taught in I.B. schools. McKoy says the Durham Public School Board added the magnet program to increase the diversity of Hillside High School.

Ninety-eight percent of students at Hillside High School are minorities. I.B. has not majorly changed the racial diversity of the school, McKoy says, but I.B. still has a positive impact on students and the community. Increasing diversity is still a goal of the program.

I.B. classes focus on teaching creativity and lifelong learning with a worldly perspective. Students can join the program in ninth grade, but there are also programs at Burton Elementary School and Shepard Middle School, says McKoy.

Students go through a lottery to get into the program, and they can apply between Jan 9th and 31st of 2017, Henderson says. Parents can get more information at the Durham Public Schools Magnet Fair on Nov. 5th, 2016.

“Right now we have internal assessments,” Simpson says. “So, each class is giving us the things we need to do to perform well on them (the tests), and it’s a lot of pressure.”

While the program is challenging, Simpson says she enjoys it. 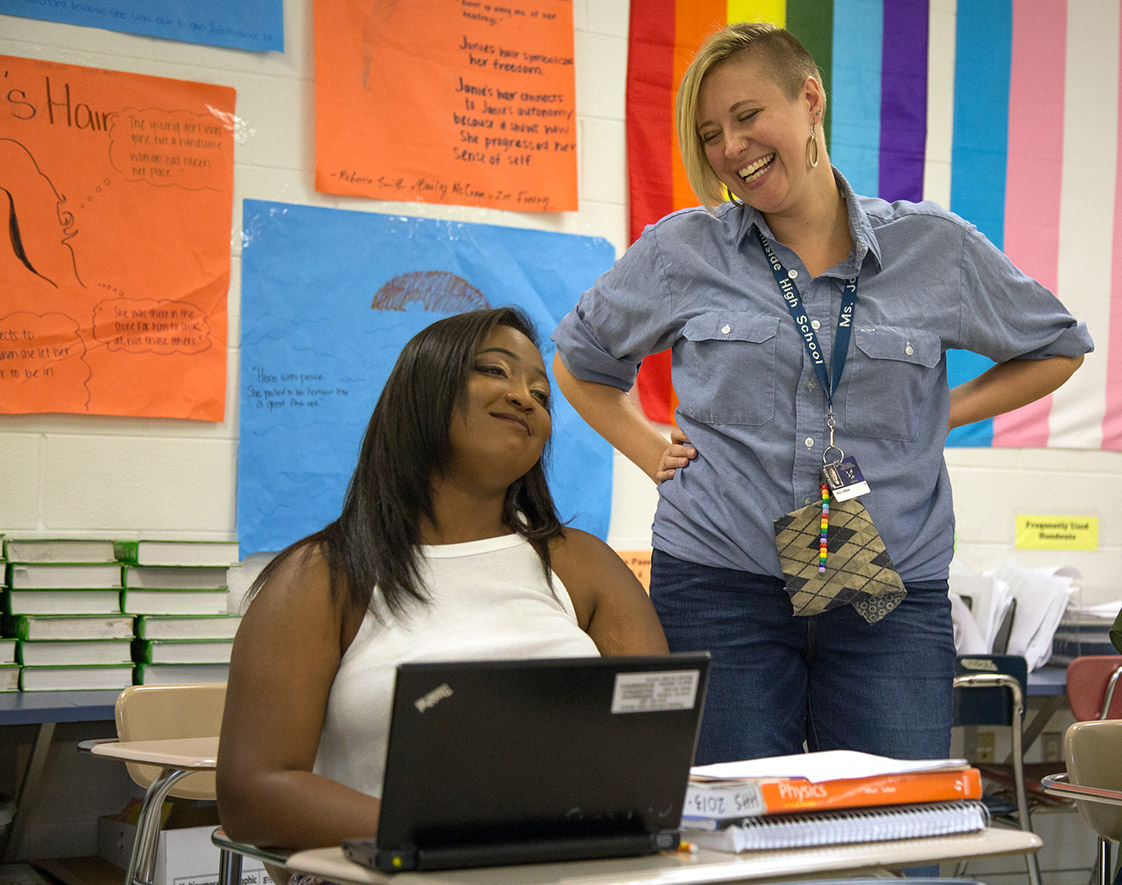 “I would encourage everyone to do the I.B. Programme – especially because they (Hillside) has the resources to implement it,” Simpson says. “I’m glad I’m going through it.”

Simpson has been in the program since 9th grade and says she is a track runner, student council historian, president of the National Honors Society at Hillside, Chick-Fil-A employee, on the board of the Junior Leadership Durham and a member Theta Phi Delta – a community service organization.

Students in the I.B. Programme have excelled in academics and athletics, Henderson says. Desmond Jackson, a current I.B. senior, recently competed in the Rio Paralympics, and Marcus Krah, a recent graduate of Hillside I.B., recently won the U.S.A. Track and Field Junior National Championship in the 110-meter hurdles.

“The I.B. Programme forced me to apply myself and set my priorities in the correct order,” Hunter says. “So when I came to college it was easy for me to balance my academics, jobs, marching band, and my fraternity . . . I applaud the I.B. Programme for giving me the necessary tools to succeed in college.”

Programme Coordinator McKoy, who is also a parent of two children and has taught classes at Hillside I.B., She says she’s proud of the program because it breaks the stereotype of Hillside High School.

“I think a lot of people tend to think of Hillside as just negative,” McKoy says. “They think of the stereotypes they hear, and they don’t really come to see what this is really about because I wouldn’t be here if it wasn’t worthwhile. And I’ve been here as a teacher and now as a parent because I have two kids. I think that people tend to think negatively about us, but we actually have a lot of things going for us.”

Rob Gourley is UNC-CH junior photojournalism major from Mooresville. He is serving as a photographer-writer for the VOICE.