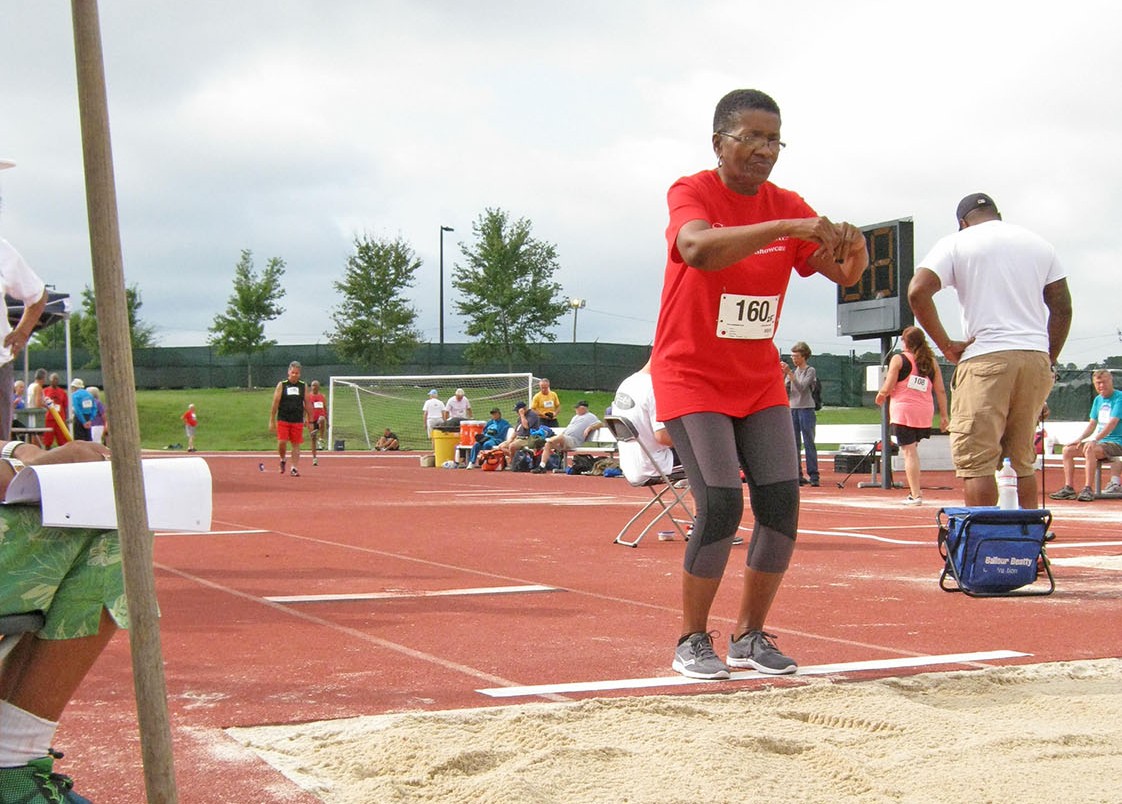 Deadra Lutterloh, 65, of Durham, readies herself before her first attempt at the standing long jump. (Staff photo by Christian Phillips)

Durham hosted the first state final event in the city’s history this past Wednesday when the Track and Field games were held at Durham County Stadium. About 30 minutes before the first event of the morning- the 5k race walk- was set to start, the competitors strolled up and down the track, both to loosen up their muscles and to catch up with friends they hadn’t seen for a while. Smooth jazz was trying desperately to be heard through a crackling speaker, as the machinery that gives life to Durham Regional Hospital churned on just outside of the stadium’s walls.

Growing up with cerebral palsy and a love of sports has given me an interesting perspective on sporting events. In middle school and high school I wasn’t able to play sports, but I was the manager and statistician for the soccer, basketball, and baseball teams. I spent years watching athletes up close preparing for events. Spending all of that time seeing how athletes got ready for a game, and then how they performed during it, has allowed me to be able to get a pretty good idea of how an athlete is going to do- just by watching them before they go out to compete.

While observing those senior athletes warm up before their long day of track-and-field competition, I could tell that many of those mature adults were going to destroy the stereotype of the traditional mall walker.

They were not going  be happy just being out in the sunshine and competing- they were looking to win.

I realized quickly that I was going to spend the day watching these people much older than I accomplishing things that I could never even dream of doing.

I spent most of my day observing the running long jump and the standing long jump. As I sat on one of the benches that had been placed right next to the sand pits, and saw the competitors take their practice runs all the way up to the sand before gently walking across the sand, I wondered what was going to be considered a good run. After the first few competitors had their jumps measured between seven to nine feet, I thought I had my answer.

Then the second group of competitors took their turn, and I looked on as they all jumped 10 plus feet, and were beating themselves up on their way back to the starting line, after they did not do quite as well as they thought they could, and at the same time encouraging their competitors to do their best. I was beginning to see what the competition was about.

It was a celebration that all of the 400 people who showed up that day were able to compete, but there was also a large portion of them that had trained hard for these events, and wanted to win, so that they could advance to the national finals. The rest of the competitors were there to prove something to themselves.

There were men and women 80 years of age and older that would move up the runway as quickly as possible- jump as far as they could- only to end up two to three feet from where they took that first step. They would walk away smiling, and everyone who saw what had happened would be clapping, because they all understood the implication.

Out of everyone I saw compete that day, that group was the one I related to the most. Because every time one of them would brush the sand off of themselves after falling into the pit and walk away uninjured as the judge called out their final distance, I would think, if I were in their place that is probably the best I could do too.

If seeing people defy their age, run faster and jump farther than I ever could wasn’t inspiring enough, there was one man who competed in both of the long jump events and was coming away with distances of about nine feet. However, every time he finished, he looked like he was in considerable pain and disappointed with his results. When he finally came over to the sitting area to pack up his belongings, a fellow competitor asked him how he was feeling. The man responded by saying that he wasn’t going to be able to finish because his neurological nerve condition was acting up, but that he would be back to compete again. His plan was to continue to compete to the best of his ability without complaining about the complications caused by his medical condition.

Towards the end of the competition a blind man made his way to the bench where I was sitting, accompanied by his sister and her husband. I naively assumed he was there to support one of the people who was competing in the long jump competition, until I overheard the conversation he was having with his friend seated on the other side of the runway. His friend asked him how he had finished in the shot put event. The man responded, oh about the same as last year. His friend then asked him if that meant that he had finished second in the state again.

After hearing that man’s response, I realized that no matter how the results came out for him, or anyone else who had competed that I and everyone else who had the privilege to watch the events that day were the real winners because we spent the day surrounded by one inspiring story after another.

Growing up with cerebral palsy I have done everything possible to be able to do as many of the things that everyone else was doing as I could. I’m always right in the middle of whatever activities my friends are doing- whether it’s the safest thing for me to be doing or not. I have never wanted special treatment, or wanted to let my disability define me. But even I have times where I think, I can’t do that, or I should probably just sit this one out and watch. But after watching what those people accomplished on that field, I understand that I and anyone else can do anything we put our minds to.

Photo caption: Deadra Lutterloh, 65, of Durham, readies herself before her first attempt at the standing long jump. (Staff photo by Christian Phillips)

Christian Phillips is a UNC-CH senior reporting major from Efland, serving as a sports writer for the Durham VOICE.