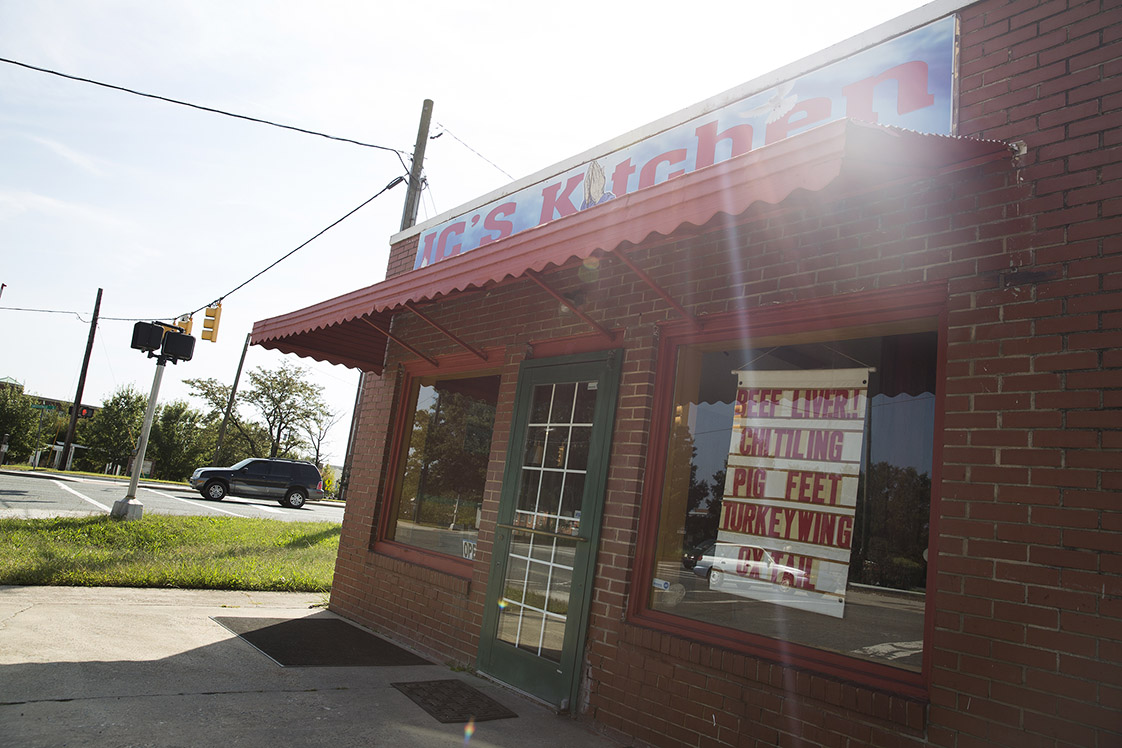 JC's Kitchen has been serving up soul food in Durham for nearly two decades. (Staff photo by Dillon Deaton)

I was born and raised in an ancient southwestern town in China where spicy food is practically a requirement. Then I moved to attend college in Hong Kong where the local cuisine lacks “serious chili” and features lighter and sugar-based dishes. Then, this fall semester, when I ended up in Durham, I was introduced to soul food. Surprisingly, I saw similarities between Chinese food and soul food, which includes the power of connecting people. 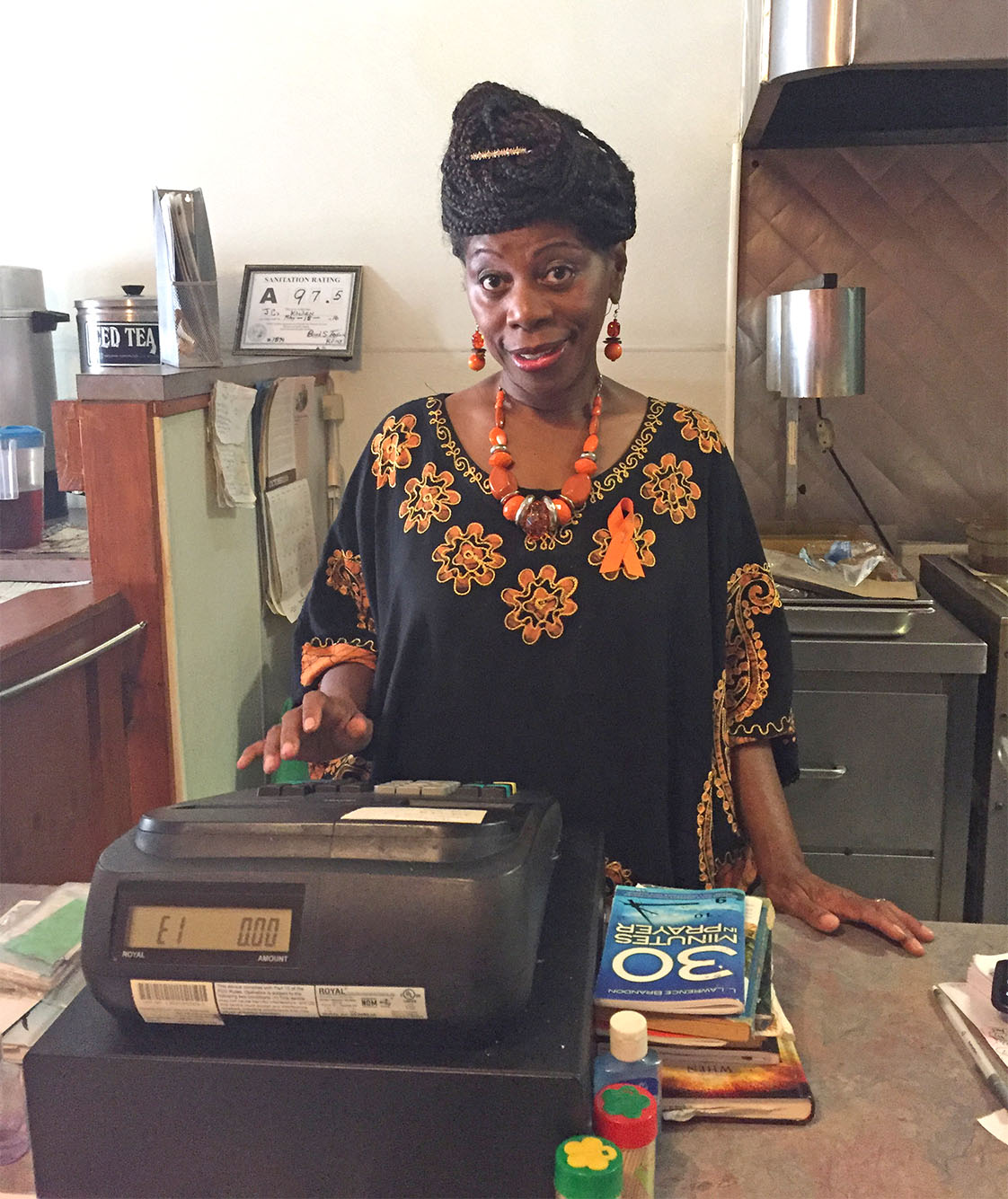 Phyllis Terry, the owner of JC’s Kitchen, works at the checkout desk where a pile of Christian books is placed. (Staff photo by Heng Su)

Rooted in West Africa and reborn with tastes of Europe and indigenous America, soul food witnessed the ups and downs of African-Americans as enslaved people with a shared identity.

“That’s what we came with, and that’s who we are,” said Phyllis Terry, the owner as well as a triathlon of cook, waiter and cashier in the classic rock-filled JC’s Kitchen (JC stands for Jesus Christ), a household name for soul food located on East Main Street in Durham.

“We’ve been here for 25 years. The culture connects us not just because of cooking, but (because) a lot of us bring it from the field and it reminds us of our past.”

People come and go, while the flavor of soul food has been passed down within families and generatons.

Terry’s brother Charles Lee opened Lee’s Kitchen in 1991. Her sister Sheilah Lee later replaced Charles and renamed Lee’s Kitchen and gave it the slogan “Where the food is anointed, and you will not be disappointed.”

Terry returned to Durham after 18 years of mission work in Japan and took over JC’s Kitchen at 2008 after Sheilah died of cancer.

Quanisha Whitfield, 24, a regular at JC, comes with her husband and son for lunch. She says she has a nostalgic connection to soul food.

“I love soul food and I am a country girl. Coming from my background, this is the only place that tastes anything like home,” Whitfield says.

“It begins with conversations when you began to talk about small things like, ‘This tastes like this,’ and, ‘What do you put into this’?”

Memories are carried by greens, ox tails and fatback — chronicled not only in the biography of individuals but also in the slave history of African-Americans.

“Soul food really comes in to its own in the United States at the latter years of slavery and after emancipation,” says Adrian Miller, a self-proclaimed “recovering lawyer” and politico turned culinary historian in soul food, as well as the winner of James Beard Award author of “Soul Food: The Surprising Story of an American Cuisine, One Plate at a Time.”

“Soul food is really a kind of celebration food of the South. Only on weekends and holidays, enslaved African-Americans got access to finding ingredients like white sugar and white flour,” Miller says.

During slavery days and the Jim Crow era, it was illegal for slaves to dine in public. Miller said that sharing Sunday dinner after communal church activities was their only chance to conduct a reunion. Food sharing therefore became extremely significant for African-Americans.

Beyond satisfying the tongue and taste buds, soul food served as a sort of social glue for African-Americans. That said, inheritance of the foodways was anything but easy.

“It is sort of oral culture. Slaves were not able to read or write as it was not legal. So they passed down the recipes from mouth to mouth,” Miller said. “Until the 19th century, we started to have the first cookbook of soul food written by the African-American.”

Food is everything to the Chinese

Food seems to be a universal intermediary that gathers groups and strengthens the family union. Chinese food is also famous for its continuity and emphasis on sharing.

Speaking Mandarin might reveal a foreigner’s understanding of Chinese ABCs, but by greeting a Chinese with the customary, “Have you eaten yet?” one makes oneself sound authentic enough to strike up a conversation in China. For food is everything to the Chinese.

From Hong Kong to Beijing, from Shanghai to Chongqing, Chinese foodways vary regionally and characterize the geographical and historical features of their own origins.

Chinese food can be categorized into eight cuisines, differentiating themselves from basic benchmarks like being spicy or non-spicy, and rice-based (southern China) or wheat-based (northern China).

Despite the differences, Chinese cuisine cultures nowadays closely connects the nation. From one end of China to the other,  the correct way to open any formal or informal business cooperation, governmental negotiation or private interaction is all parties seated around a dinner table, sharing food and drink together.

“If you don’t sit down for a dinner together, you can never get business done,” this is a typical expression that Chinese parents teach their children.

Soul food is undergoing dramatic changes too. It has long been criticized for its unhealthy ingredients with a lot of deep fat fried and sugary dishes. Entering its sixth century, soul food is on the track of a new trend that fits into the contemporary public pursuit of a healthy diet.

“Vegan soul food is most popular or emerging trend,” Miller says. “(At) most soul food restaurants in the United States now, vegan is (on the menu) in terms of its side dishes. Vegan is no diary and no meat.”

Soul food incorporates memories from hundreds of years ago and reminds the diners of the identities that bind them as a single community. In the future, soul food will still keep adapting to the needs of people and recording the changes through its flavors­—connecting more and more souls along the way.

“I study soul food for two reasons,” Miller says. “First, it’s the easiest way to connect people. Second, it tells us the history.”

Whether it be Durham or China, the food that people bring from the field to the table, feeds the bellies and connects the souls.

Heng Su is a UNC-CH senior journalism and political science major from the University of Hong Kong. On the VOICE he is serving as a commentator and staff writer.