The Durham Colored Library was founded in the basement of a church in 1913 as the first African-American library in Durham. In 1940, the library moved to its current location at 1201 Fayetteville Street and was re-named the Stanford L. Warren library. It has since remained an important hub for the city’s African-American community.

Hillside High School junior Aaliyah Jackson has been visiting the Stanford L. Warren library since she was a little girl.

“I started going to the library because my grandpa shares its name, Stanford, and it’s close to my house,” she said. “I love the selection of books that this library has. I really like their action and science books. A lot of them stick with you and help you with real life situations.”

Library Manager Myrtle Darden said the Warren library, which is part of the Durham County Library system, is a historically rich community institution.

“It’s neat to have customers come in and say, ‘I remember this place from when I was a little girl,’ or to look at the old pictures on our wall and be able to identify themselves,” Darden said. 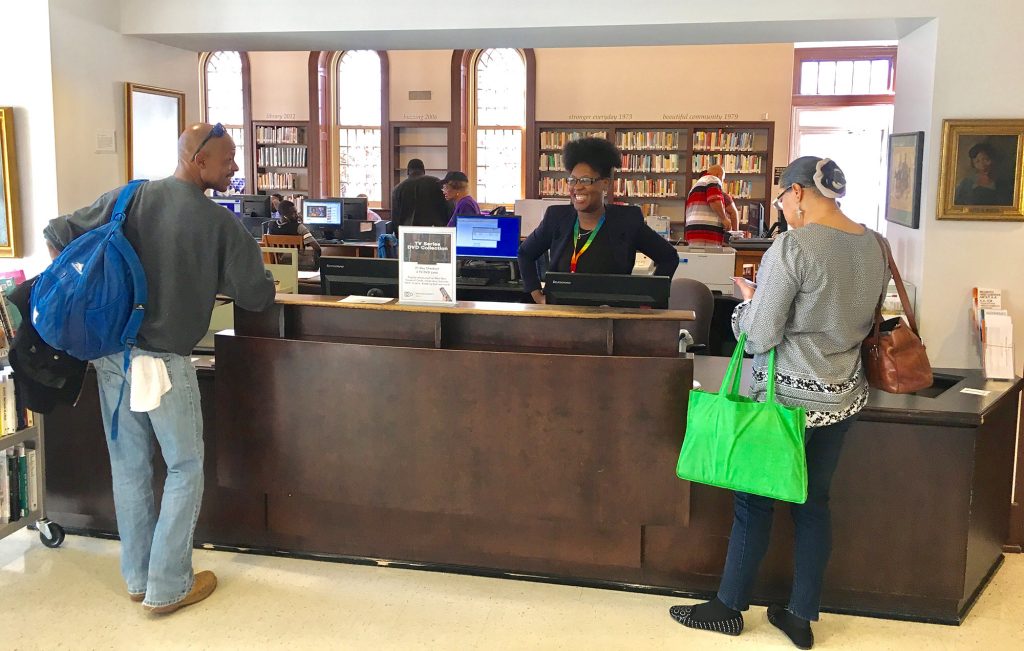 “My job is to create programming that engages the teens in the community,” Hill said. “I also do outreach, so I go to the middle schools, the high schools and the Durham Youth Home and do programs there as well.”

Hill said she tries to create programs after school hours for teens at the library, which she views as a haven in the community.

“This is a safe place,” she said. “I like that I can provide resources that help them be here and not out there indulging in things that they aren’t supposed to.”

Hill plans a variety of fun and educational activities, from movies to science programs.

Last week, the library held its own “cupcake war”. Teens frosted popular story characters like Cookie Monster and Elmo onto their cupcakes, but Hill said a design of Japanese cartoon character Naruto took the cake.

Since the Main Library closed, Hill said even more teens are coming to her programs held on Mondays and Wednesdays. Her favorite part of her job is building lifelong relationships with the children.

Although the library is a great place for teenagers after school, Darden said that children 11 and under not encouraged to come to the library without parental supervision.

“The library is a public space, [but] any public space isn’t a safe haven,” Darden explains. “However, we do encourage parents and children to come together.”

The library’s services also extend far beyond programs for teens. Darden said the library is an asset to the adult community as well.

“We offer computer classes that focus on a variety of topics like Microsoft or resume building,” Darden said. “A lot of people come to the library to apply for jobs.”

Darden, like Hill, is passionate about her job. She said her favorite part of working at the Warren library is interacting with the people.

“I love learning things from new people, listening to people’s stories and doing more research on things I don’t know,” Darden said. “I like to know that I am fulfilling a need in this community and that they know we are here to help them.”

Olivia Browning of Fairfax, Va., is a senior at UNC-CH double majoring in economics and business journalism. She is serving as co-editor of the Durham VOICE.

Alexis Allston of Wendell is a sophomore at UNC-CH majoring in journalism, women's studies and creative writing. She is serving as co-editor of the Durham VOICE.