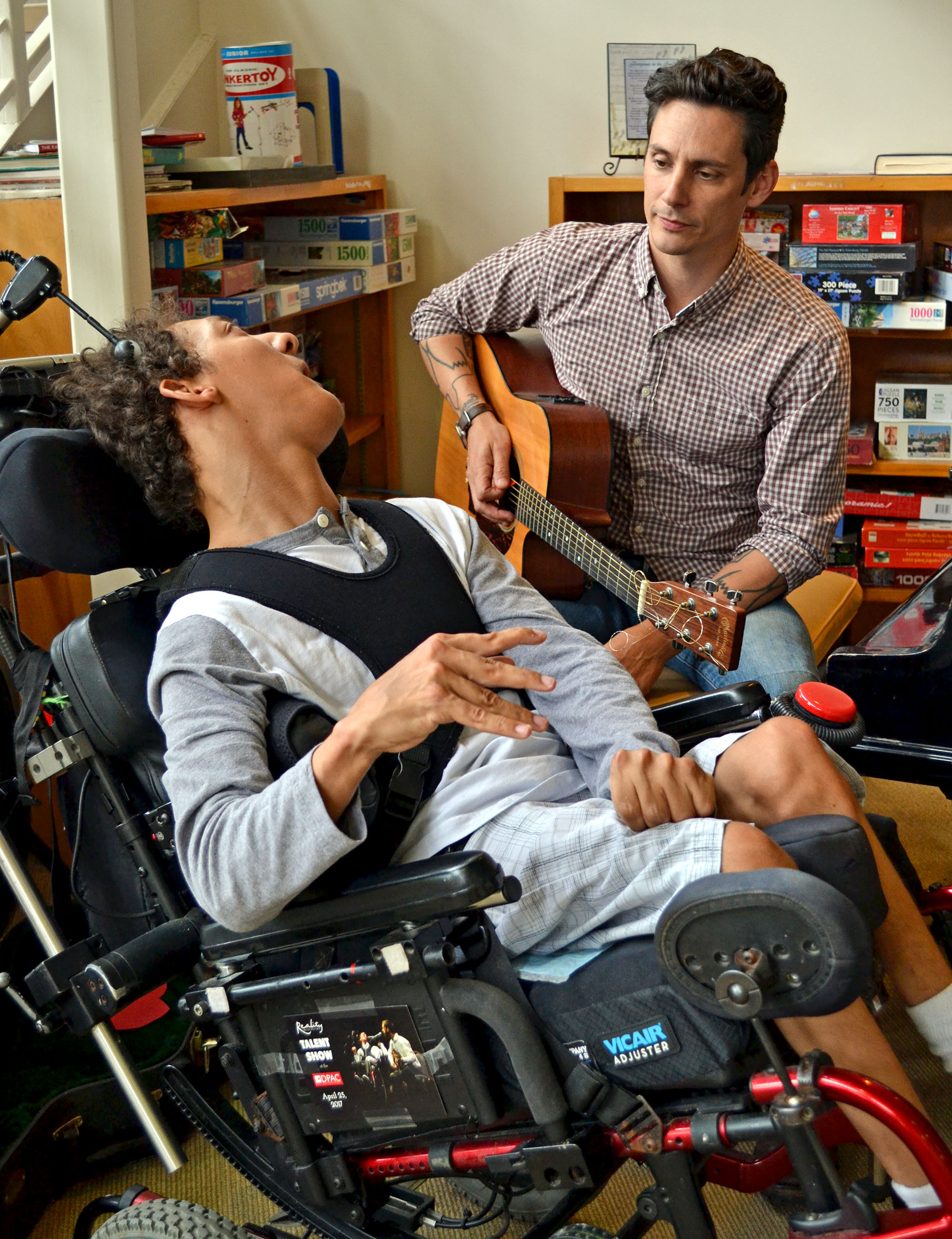 For almost six years, Durham residents and close friends Noah Goyette, 40, and Sloan Meek, 29, have entertained seniors at the Durham Center for Senior Life. Meek and Goyette arrive every Tuesday and Friday at noon to play a variety of instruments for onlookers. 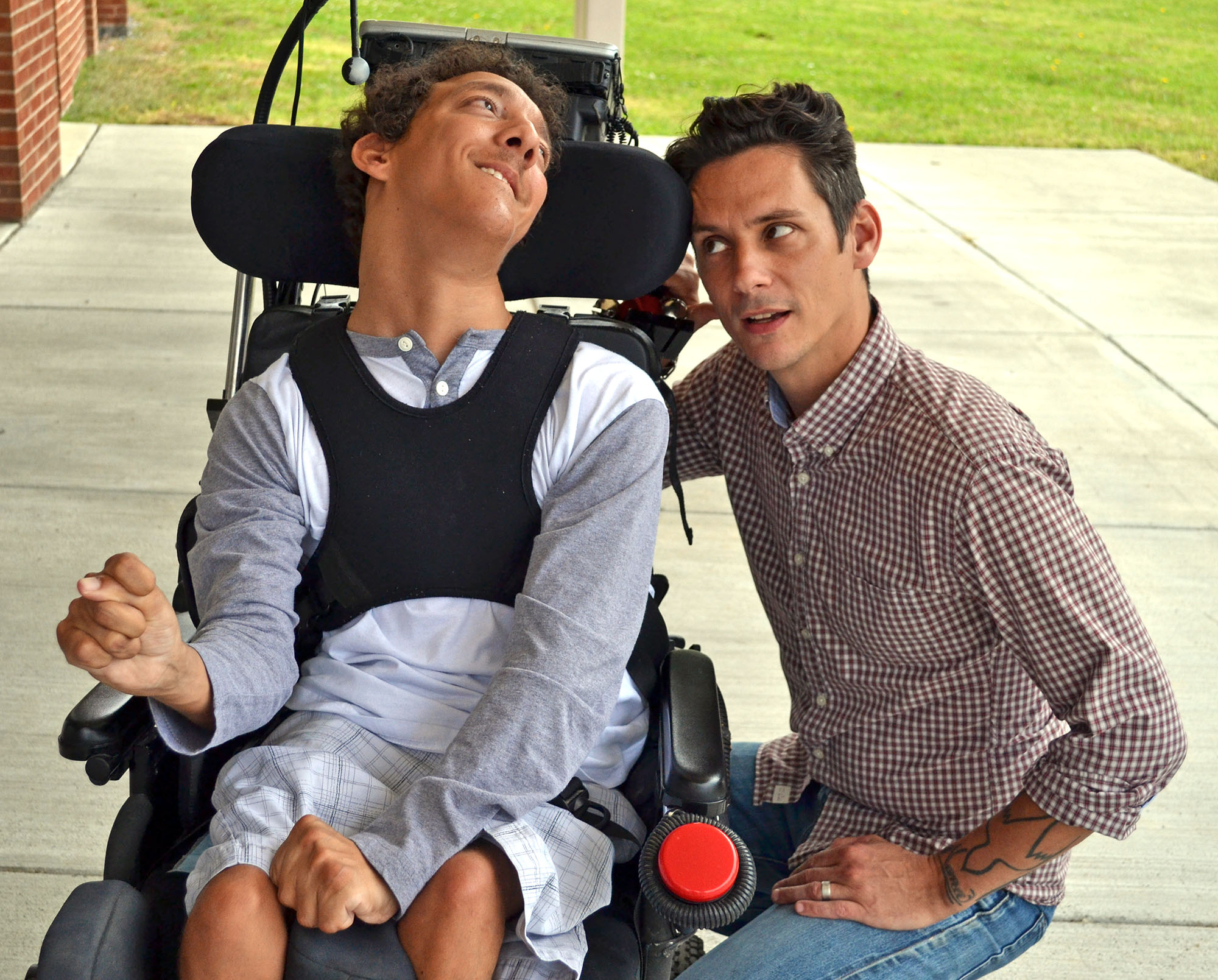 “We’ve kind of been brothers,” says Goyette of his friendship with Meek. (Staff photo by Katelyn Mottesheard)

“Noah jokes that we’ve outlasted three center directors and seen at least 20 volunteers come and go,” said Meek.  “Our main aim is to create a fun or soothing atmosphere for all the many people who come here.”

In addition to performing, the duo also teaches interested participants how to play instruments, and everyone the audience is welcome to sing along.

Since they began playing at the center, their performances have grown popular with the visitors there.

“We definitely get a lot of dancing and clapping,” said Goyette.

“I look forward to hearing them sing and play when they come,” said Patricia Bynum, 74. Bynum visits the Durham Center for Senior Life every day to exercise, and says she enjoys listening to Meek and Goyette’s performances. “They do a wonderful job singing.”

The two enjoy playing soul music and rock, but also frequently take song requests from the audience. Meek, who has cerebral palsy, speaks with a computer and uses a custom-made wheelchair that holds instruments close to allow him to play. Together, the duo performs as the band Meek Noise.

Goyette and Meek met in the Durham North Street Community 13 years ago, where residents with varying mental and physical abilities live together and care for each other. Goyette frequently visited Meek’s home while volunteering to care for residents in community, and the two bonded over their shared interests, particularly their love for music.

Outside of their time at the center, both men are involved in a number of volunteer programs. Meek has given presentations at Duke University and the University of North Carolina at Chapel Hill, and engages in political activism to promote the rights of people with disabilities and other marginalized groups. 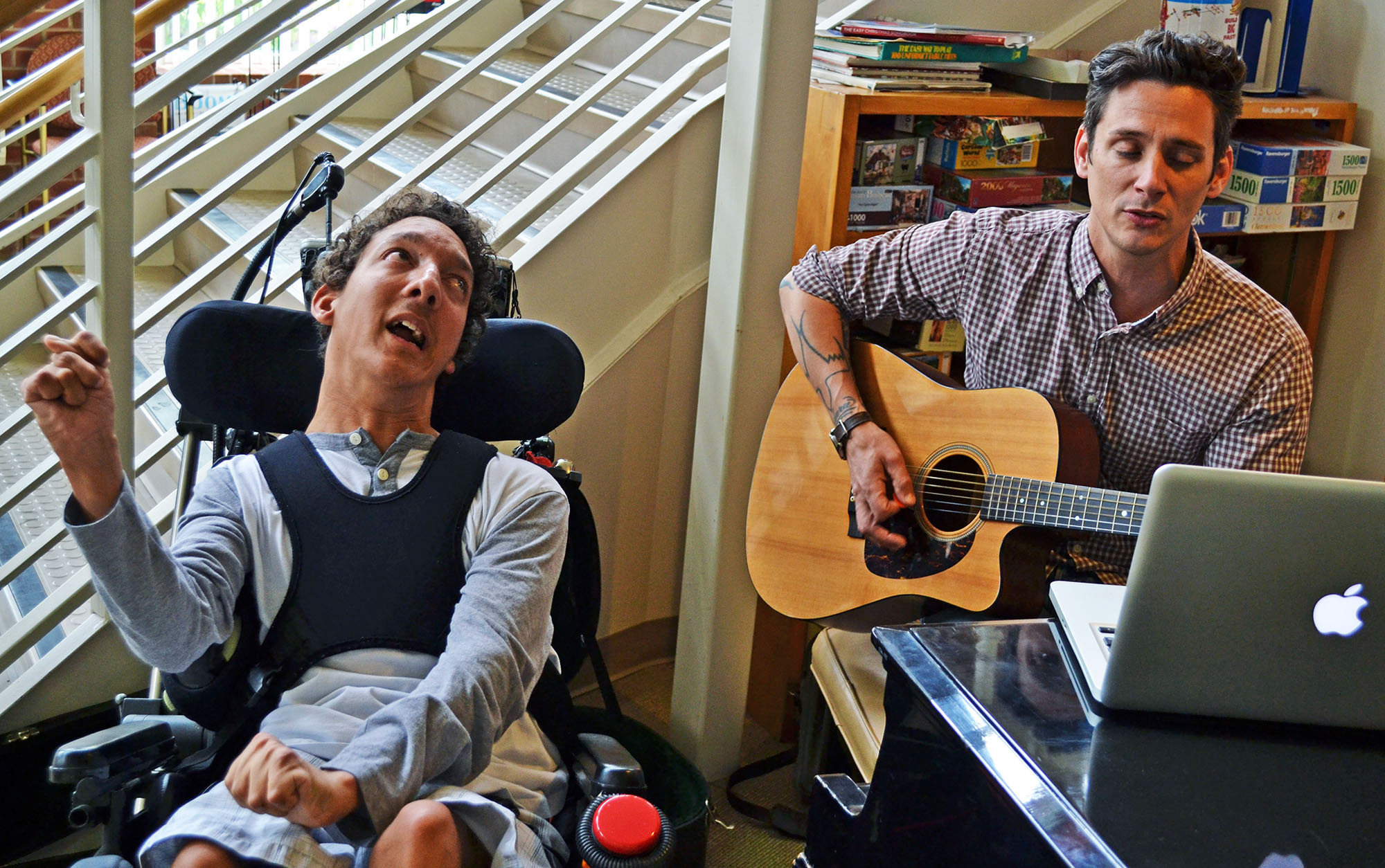 Meek also writes music, and currently plans to perform at the Durham Performing Arts Center on Tuesday, April 25. The gig, which Goyette helped him land, will raise money and awareness for Reality Ministries, a Durham-based program that seeks to create opportunities for those with disabilities.

Goyette has volunteered with a number of philanthropic programs as well, such as the Americorps and the Durham Mighty Pen, an organization dedicated to empowering Durham youths through writing workshops. In addition, Goyette is also involved with the Durham music scene, and performs with musical groups such as Flash Chorus and Arrows Out.

Though their performances at the Center for Senior Life entertain onlookers, Goyette and Meek hope that participants can learn a lesson about music as well.

“We want everyone to know that they have music in them,” said Meek. “It doesn’t have to sound like what’s on the radio. You don’t have to be trained or have a perfect voice or delivery just to love to be with others and share whatever gift you have.”

Avery Rodriguez of Springdale, Ark., is a senior advertising/journalism major at UNC-CH. He is a staffwriter/photographer for the VOICE.