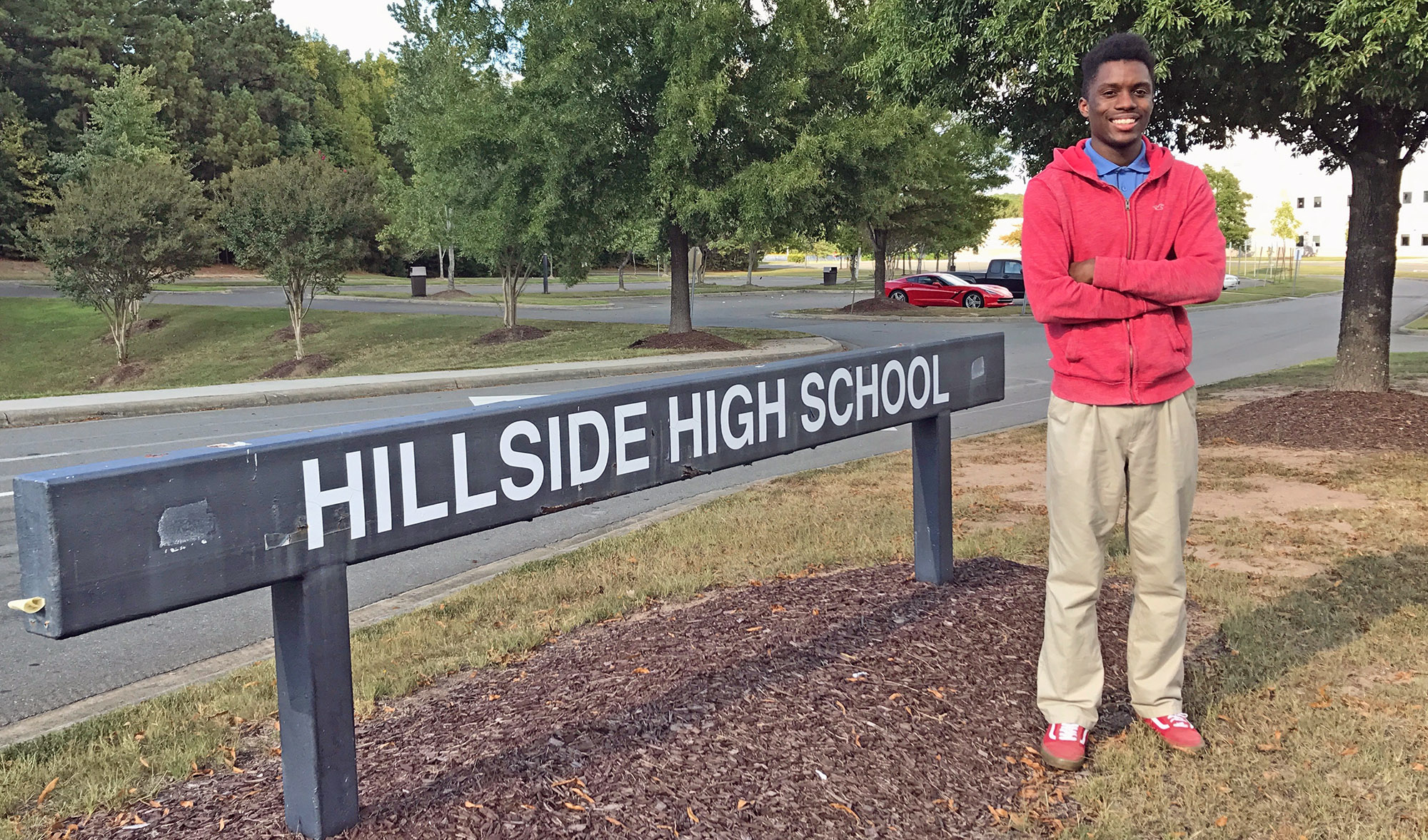 Hillside High School senior Jasir Haynes, 18, was one of two students from his school to attend NCCU’s Summer Youth Business and Entrepreneurship Academy. There he honed his skills by attending workshops and lectures, and visiting successful businesses. (Staff photo by Davis McKinney)

Summer break and all of its familiar facets like pools, naps and no homework just weren’t enough for Jasir Haynes and Jalen McKoy.

The two Hillside High School students wanted to use their vacation time to try to better themselves and gain valuable skills and knowledge. By attending North Carolina Central University School of Business’s Summer Youth Business and Entrepreneurship Academy, Haynes and McKoy believe they did just that.

The two were among 40 high-achieving minority students to participate in this program, which taught core entrepreneurial principles through workshops and lectures from many successful business leaders, motivational speakers and community members.

Haynes, 18, said the program was chock-full of educational activities and experiences.

“We were always busy,” he said. “From sunup to sundown.”

In addition to the workshops, the students toured the Charlotte Hornets arena and visited Allen Entrepreneurial Institute in Lithonia, GA.

Keisha Williams, director of the academy, said the activities all carried the theme of entrepreneurial scalability, or business expansion.

Williams said that aside from the networking opportunities and practical business lessons, she feels the renewed perspective of success is one of the most valuable things students learn while at the academy.

Durham has a rich history of successful African-American businessmen. During the early 20th century, Parrish Street in downtown was home to a plethora of thriving minority-owned businesses such as the Mechanics & Farmers Bank, which still remains on that street today. This area was so successful that it was widely referred to as ‘Black Wall Street.’

Haynes said the legacy of Black Wall Street serves as inspiration for his business aspirations and goals.

“At that time, African-Americans were struggling for equality but at the same time there were individuals that were willing to work hard and go beyond the call of duty to create their own business,” he said. “At this time it’s easier — not the best, but it’s easier. So I have no excuse or reason to think I can’t own my own business because of how society is.”

Williams said she is hopeful that this generation of aspiring businessmen and women can bring about a resurgence of minority entrepreneurship in historic Black Wall Street and Hayti neighborhoods.

“That area needs to be thriving as it was at the turn of the century, and I truly think that these kids are the ones to do it,” said Williams.

Williams also said ensuring today’s minority youth are informed about Black Wall Street is important to guiding them toward success.

“We want them to realize that there are barriers that we have overcome, and I want to tell each one of them: ‘This can happen for you,’” she said.

To give the students hands-on experience, Williams partnered them with the local restaurant, Salt Box Seafood Joint, located at 608 N. Magnum St. in Durham. In groups, they studied the business model of the restaurant and came up with proposals for an expansion into a new location.

“They came up with some of the most amazing ideas for how he should expand,” said Williams.

McKoy, 16, said his group sought to preserve the beach-like feel and close customer-staff relationship at the restaurant in their proposal.

“I learned that a key part of what makes a business successful is its uniqueness, so we wanted to keep those things in the new location,” he said

Salt Box Seafood Joint has since decided to open its new restaurant in the Rockwood neighborhood of Durham.

Haynes said one of the most rewarding parts of the program was meeting new people, and forming bonds with other students.

“These were some of the smartest and most inspiring people I’ve met in my entire life and they’ve got a lot going for them,” he said. “Even though it’s just a short amount of time. It’s unbelievable how close you can get to them. At the end of the program, it felt like we had become a family.”

McKoy said the academy was one of the best experiences he’s ever had.

“Overall, the experience was just amazing,” he said. “Honestly, you didn’t even have to be interested in business to be able to pull something away from it.”