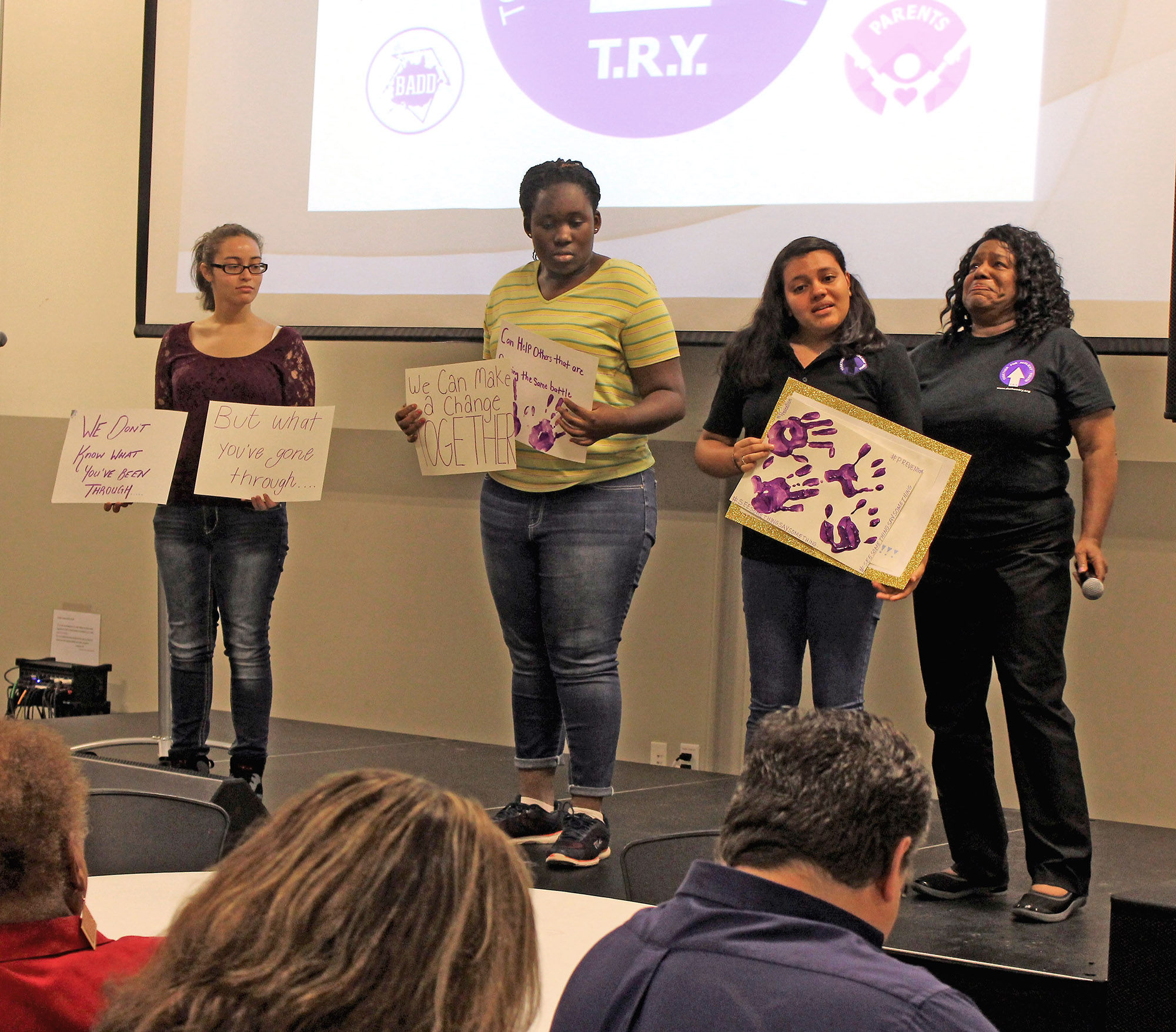 During a presentation to two families whose sons recently died of overdose, TRY youth facilitator Angie Mejia and TRY founder Wanda Boone (right) are overcome with emotion. “What you’ve all been through, it really touched me today,” Mejia said . “And you said that you didn’t save lives. You didn’t know how to save his life. But you did, because you saved ours today.” The presenters include (left to right) TRY youth leader Sofia Escotto-Pimentel, TRY youth leader Ugonna Ogboko, Angie Mejia and Wanda Boone. (Staff photo by Allison Tate)

Gerald Elliott’s first solo trip as a young law enforcement officer left an impression. It was 1987, and he was to deliver a death notice to a family that had lost their 21-year-old son to drug overdose. Elliott was twenty-one, too.

Thirty years later, Elliott and his family found themselves on the receiving end when they got the news that Elliott’s 18-year-old nephew, Jordan Blake Bowen, had met the same fate.

“Addiction. It don’t give a crap if you black, white. If you rich or poor. If you a Democrat or Republican. It just—it don’t care. It could care less.”

Elliot gave his testimony as he held his nephew’s class portrait in his hands and looked out at the small supportive group that had gathered at ReCity, a shared workspace in downtown Durham,  on Saturday afternoon.

Two points were emphasized at the Together for Resilient Youth meeting: prescription overdose prevention is key, but, when fatal overdose happens, those who have tried have not failed.

The TRY coalition began in 2003 when Dr. Wanda Boone, TRY’s founder, saw a need for a drug prevention program in Durham. She and her husband, Earl, had fostered young people for 15 years throughout the 1980s and 1990s and had started to see a trend in the issues the children faced.

“We noticed that something was happening to our young people that we didn’t seen before,” Boone said.

The issues that the foster children experienced went from behavioral problems to substance abuse, mental health challenges, criminal records and gang involvement. Those issues inspired her to take action, and she said that TRY’s impact on young people has kept her going ever since.

Boone led Saturday’s meeting with a presentation on how increasingly serious prescription drug misuse and overdose is, and how interrupting the cycle of misuse could save lives.

The focus was opioids, including heroin and fentanyl. During time spent on the North Carolina Injury Prevention task force, Boone and others found strategies for preventing overdose fatalities resulting from the drug. For the past three years, they’ve been putting those strategies to use.

Naloxone, also known as Narcan, has been one of the major tools in reducing overdose fatality rates. The “bring-back drug” immediately reverses opioid overdose by getting between the opioid and receptors in the brain, signaling the body to start breathing again.

Still, Boone said that she wants to see prevention start even earlier—before misuse ever happens.

In her talk, Boone went over four ways to prevent prescription drug misuse: Taking prescribed pain medicine only as long as needed, not taking medication that hasn’t been prescribed to you, locking up unused medication and disposing of what isn’t going to be used.

Boone said that prevention also comes through educating young adults and their families and friends on the consequences of prescription drug misuse and strategies like recognizing and reversing an overdose.

“I want you all to be able to save lives,” said Sanford as she ended her own presentation on life-saving Naloxone kits and the benefits of having an overdose plan. She asked that anyone using opioids—either for pain relief or recreation–inform a trusted family member or friend on what to do if they overdose.

“It’s a lot to ask of anyone, but most the time for the people who love us there is at least one person who is willing to say, ‘Yeah, I can do that.’ Train them,” Sanford said.

TRY youth facilitator Angie Mejia and youth leaders Sofia Escotto-Pimentel and Ugonna Ogboko presented two families of those who had died from overdose with message boards with sayings like “We can make a change together” and “We can help others who are fighting the same battle.”

Mejia, a freshman at Saint Augustine’s University in Raleigh, said that her inspiration to become a part of TRY came from a desire to advocate for those battling alcoholism.

Mejia said that, being from a family of Latino heritage, she saw family members struggle with alcohol. After learning about TRY from a friend at Riverside High School, she joined the group.

She said while she may not have been as affected by the consequences of drug overdose, she understands and empathizes with families like Gerald Elliott’s.

“I’m empathetic with them and how they feel, because we don’t know what everybody’s gone through.”

Together for Resilient Youth meets on the second Wednesday of every month at 10:30 a.m. in the second-floor conference room at the Golden Belt building. Golden Belt is located at 807 East Main Street in Durham. For more information, visit durhamtry.org, email wanda.durhamtry@gmail.com, or call (919)-491-7811.