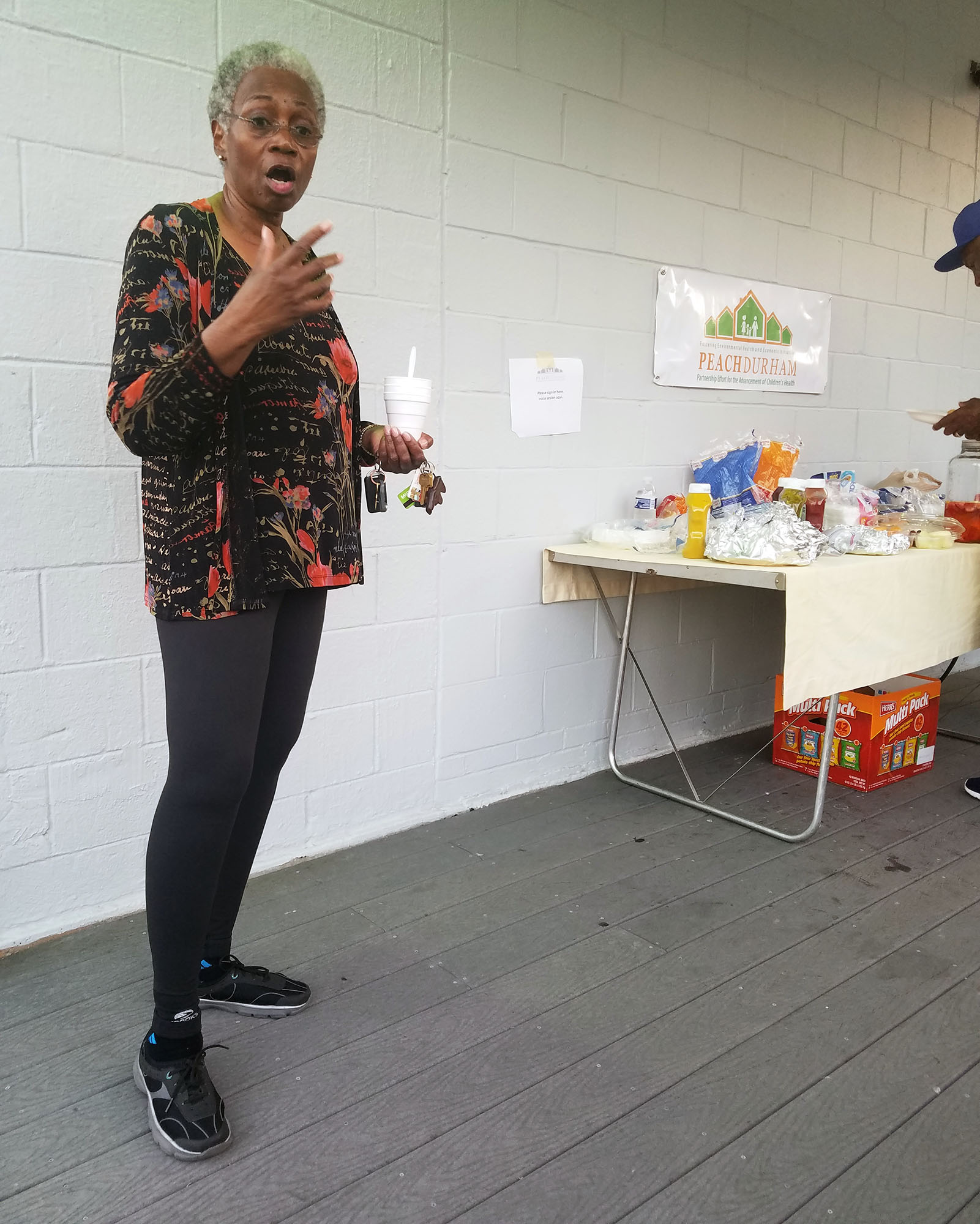 Beatrice Jackson urges PEACH board of directors and community members to bring as many people as possible to the meeting at the Holton Center Oct. 24. (Staff photo by David Fee)

In an earlier version of this story, the VOICE stated incorrectly that PEACH had 300 contractors trained. The correct number of contractors trained by PEACH is 700. The story also incorrectly stated that PEACH was responsible for removing lead hazards in more than 200 buildings; rather it has been responsible for identifying more than 200 residential properties with lead hazards in and around Durham. The VOICE regrets the errors.

Hot dogs and hamburgers were sizzling on the grill in Old Five Points Friday, where the board of directors of PEACH (Partnership Effort for the Advancement of Children’s Health) gathered with the community to talk about the dangers of lead.

The event happened at the UDI Resource Center’s outdoor pavilion on Magnum Street, where the PEACH office is located.

The heavy metal, found in paint prior to 1978, can cause negative effects to all systems of the body, but it can especially damage children’s developing brains. Children are more likely to be contaminated from lead from crawling and putting objects in the mouth. In some cases, lead poisoning can be lethal.

Because lead contamination is especially dangerous to children, it has become the primary focus of PEACH. The organization offers residential lead-based paint risk assessments, and an NC-EPA lead renovator’s certification training, which is required by federal law for contractors to remove lead-based paint.

PEACH was initially formed as a coalition between NCCU and the NECD Community Reinvestment board. However, it wasn’t until 2007 that Smith officially incorporated PEACH into a charitable organization.

“Since 2007 we have been trying to build it in the business side of things.” Smith explained.

The organization has trained more than 700 contractors to safely remove lead-based paint from homes, and the group has been responsible for identifying lead hazards in more than 200 residential properties in and around Durham.

“Over the last year and a half, our phones have been ringing from people wanting to get assessments,” Smith said.

PEACH aims to not only train contractors on lead assessments and removals, they also educate the general public about the dangers of lead.

“Most recently, there was a block party on North Drive Street and we coordinated with Reinvestment Partners to provide demonstration materials for children about where lead could be found,” said Beatrice Jackson, Community Outreach Coordinator for PEACH.

Improper removal or disturbance of lead-based paint can result in lead dust that compiles in grass, soil, rugs, and even pet’s fur.

Even if your home was built after 1978, there is still potential of lead contamination for your family. Kristen Henry, a mother living in East Durham, came to the Friday cookout to voice her concern about shredded tires used as mulch in East Durham Park.

“It has 11 known cancer-causing carcinogens,” she said. “And they just put down 15 tons of it in East Durham Park in April.” One of those carcinogens in tire mulch is lead.

Both the federal EPA and Consumer Product Safety Commission have declared tire mulch not safe for playgrounds, so Henry suggests that the shredded tires be switched to natural products, such as wood mulch or grass.

PEACH needs the help of the community in order to make Durham a safe, lead-free environment to raise children. The organization is sponsoring a town hall-style meeting at the Holton Center on Oct. 24 at 6 p.m., where members of the community can voice their concerns about lead contamination in the community.

“On the 24th, we are going to make a big push to get people connected,” Jackson said. “We need everyone to bring their friends, family and neighbors.”