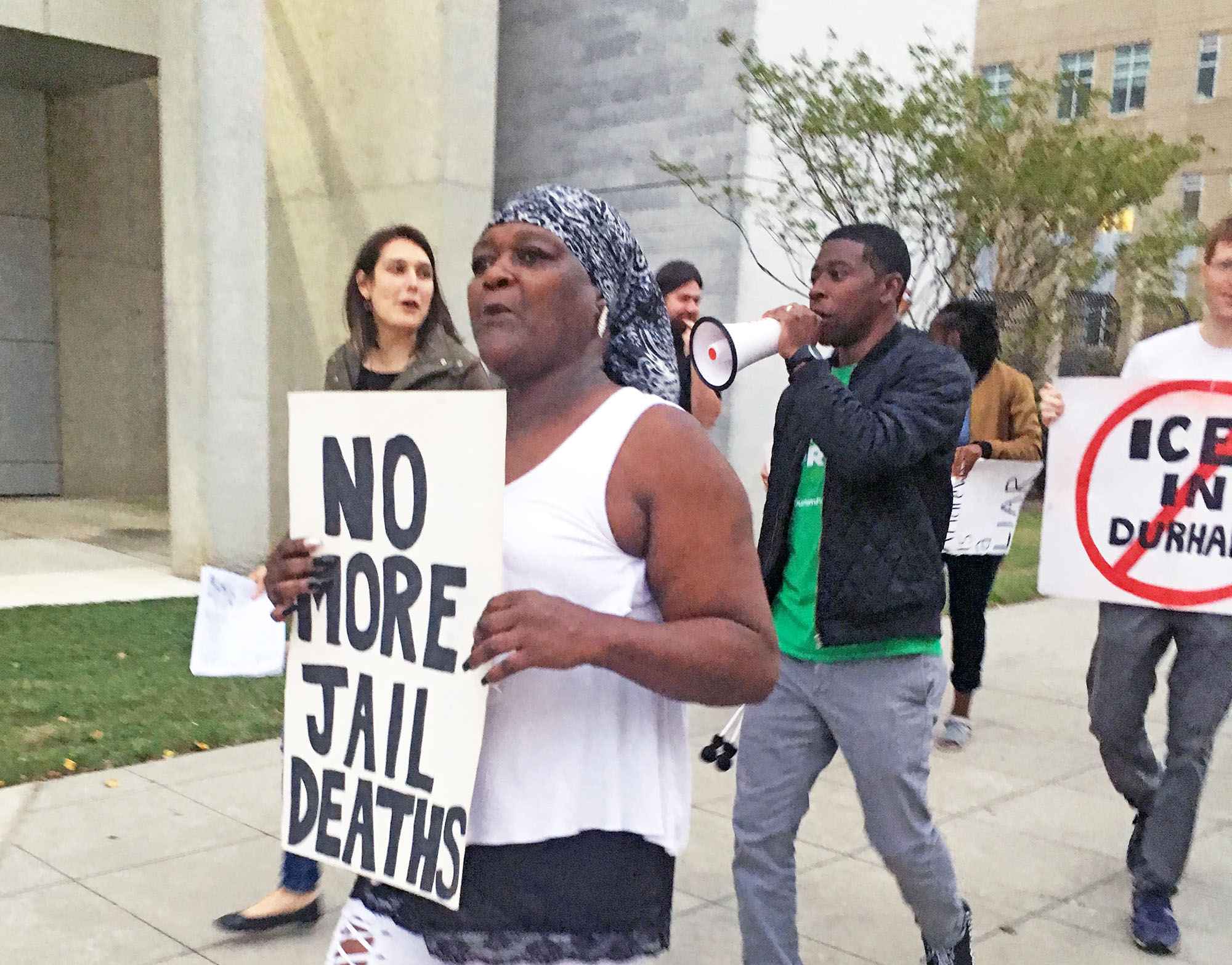 Cynthia Fox marches with other protesters. (Photo by Sarah Cline)

The conditions at the Durham County Correctional Facility need to change, according to the Inside Outside Alliance. And they’re doing everything in their power to make it happen.

As part of ongoing protests for prison reforms at the correctional facility, protesters gathered outside of the jail last Friday to voice their grievances with the treatment of prisoners, the sheriff, and changes being made to visitation.

The Inside-Outside Alliance, or IOA, is a Durham-based activist group that organized this event as part of their standing picketing series to enact change in the Durham correctional system. 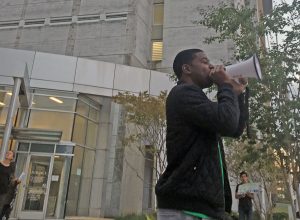 Le’Andre Blakeney addresses DPAC patrons as inmates look down from above. (Photo by Sarah Cline)

These demonstrations come in the wake of five deaths in the correctional facility and three suicides. A News & Observer report from August found that there have been 51 deaths in North Carolina prisons in the past five years linked to lack of jail supervision.

The Durham County Correctional Facility sits on Mangum Street, directly across from the DPAC. The protest began at 6 p.m. just as people were arriving to see Rodney Carrington in concert in the DPAC.

The juxtaposition was not lost on the protesters, and as their voices rang across the street, they hoped to instill the gravity of the disparity between inmates and concert goers in the DPAC patrons.

Protesters had signs carrying slogans: “All protesters are political prisoners,” and “No more jail deaths.” A group assembled of about 12 people and the chanting began: “One: we are the people! Two: a little bit louder! Three: we want justice for all people!”

Visitation was canceled September 29 through October 7 without any warning or explanation by the Durham County Sheriff’s Office is directly in control of the jail.

This protest is part of a series that will continue every Friday at the facility until Durham elects a new sheriff, according to IOA, which has called for the removal of Sheriff Michael Andrews based on the video visitation practices, alleged collaboration with Immigration and Customs Enforcement for deportation holds, or ICE, and jail deaths.

And according to Cynthia Fox, an IOA member, inmates face the struggle to stay alive every day inside the walls of the Durham County Correctional Facility. 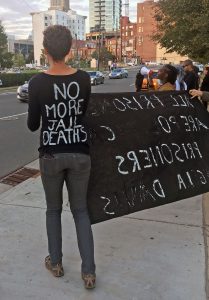 Lucy Bergwell makes a statement at the protest. (Photo by Sarah Cline)

According to Fox, the sheriff’s department has tried to cover up everything IOA prints. “He tried to pass the buck,” she said in response to claims of the sheriff not taking action to improve quality of care.

Fox, who has a son that went to the facility when he was 17 for being present during a shooting, Fox said that he was forced into taking a plea deal that gave him a prison sentence of 20 years, even though he was not the one who was shooting.

Her son is now out of the facility, but Fox is still fighting for inmates to have better conditions.

Fox said that there is only one medical personnel on staff at any given time and a doctor comes once a month, but with 500 inmates it is difficult to provide the care that each individual needs.

There are no seizure attendants, alleged Fox. Those suffering from addiction withdrawals or effects of diabetes are not aided by medication, which Fox cites for the five deaths. The well publicized death of Michael McCain in January of 2016 was found to be due to a seizure disorder that was neglected in the facility.

Fox spoke about alleged mistreatment of the inmates by the correctional facility  staff, ranging from physical and sexual assaults to holdbacks, or restricting the inmates from exercise and visitation time.

As for the food, Fox said the inmates are served meals on waterlogged trays and are given toilet water that comes out of moldy pipes. “There’s no nutrition whatsoever,” Fox said. “The dirt from the trays gets in the food.”

“That’s what we fight for- for people to be treated like human beings,” Fox said. “It’s just that simple.”

IOA holds a monthly letter writing to send notes to inmates on the inside and create community to let them know they aren’t alone, according to Lucy Bergwall, a member of IOA who has background with prison abolition movements.

Bergwall said about 11 percent of inmates respond to the letters, and the responses are published in a monthly publication called Feedback.

One responder has made a significant relationship with IOA—so much so that his letters and poems were an integral part of the protest. This inmate goes by the name of Ghost, and he has a lot to say about the treatment in the facility.

Bergwall and a fellow protester stood in the center courtyard of the correctional facility and read aloud Ghost’s poem and letter.

“We only get 6 hours to ourselves and the rest is behind walls,” the letter said. “They’re trying to make us not get along with each other.”

As for the food, “the chicken is still raw,” Ghost’s letter said. “The juice they serve us turns green.”

“But I’m keeping strong,” Ghost’s letter said. The letter was read aloud through a megaphone so the prisoners could hear. At this point the inmates were gathering around the windows to view and hear the protest.

According to Greg Williams, an IOA member and Duke Divinity student, the protest on Friday, October 27 will be integral for the prison reform movement. The protest will focus on inmates not being able to practice religious beliefs inside the correctional facility, specifically Muslims.