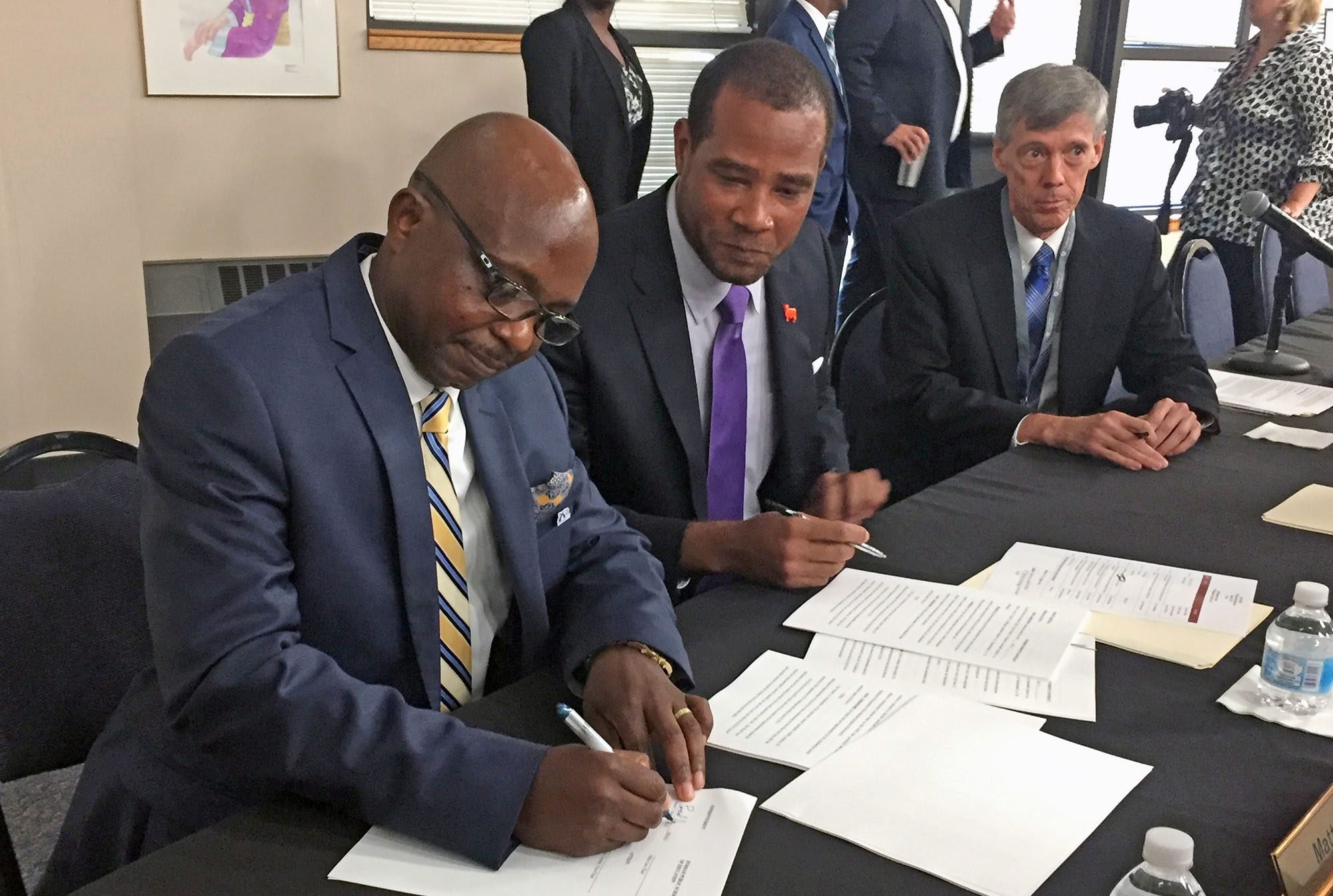 Dr. Pascal Mubenga was signed to a four-year contract with an annual salary of $222,500. He is expected to start around Thanksgiving. (Staff photo by Nile Foxx)

The Durham board of education named Dr. Pascal Mubenga as the new superintendent in a brief meeting on Monday night.

Mubenga was signed to a four-year contract with an annual salary of $222,500. He is expected to start around Thanksgiving.

Mubenga will take the place of Dr. Bert L’Homme, who surprised the board by announcing his retirement in April. L’Homme improved the performance of many Durham schools during his tenure.

Mike Lee, board chairman, announced the new superintendent and the board was unanimous in selecting him.

“We have made the perfect choice in my opinion,” Lee said. 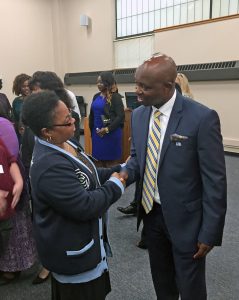 Mubenga began his career as a math teacher at Nash-Rocky Mount Schools, and has worked in public education for over 20 years. Most recently, he has served as superintendent of Franklin County Schools in Louisburg.

“I’m very excited and humbled as well for the opportunity given to me,” said Mubenga. “Seventeen years ago I left DPS, and today I return.”

Mubenga noted that he would use the first three months to meet with the public and collect qualitative data.

“I want to hear your opinions,” said Mubenga. “I want your ideas.”

Mubenga will lead a Durham schools with nearly 33,000 students – up from only 8,300 students in Franklin County.

“This is my 30th year living in the Triangle,” said Mubenga to a crowd of about 150. “I know the challenge of Durham Public Schools, as well as the opportunity that we have here.”

“If you look at what he’s done in Franklin County, specifically around low-performing schools, he has nothing but a track record of success, and I’m confident he’s going to bring that to Durham,” said board member Matt Sears.

“My first impressions of the new Superintendent of Durham Public Schools are positive,” said Jones. “I’m eager to see his strategic plan he mentioned once it’s developed and I look forward to working with him on community initiatives.”

In the wake of the recent threat of private takeover of two Durham Public Schools, Mubenga is aware of the problems low-performing schools will continue to face.

“I think one of the bigger challenges is charter schools and private schools,” said Mubenga. “The influx of charter schools is pulling the best students out of the district. So my job is to work with our board to make sure we bring everybody back.”

During his time as superintendent of Franklin County Public Schools, the number of low performing schools dropped from seven to one in two years.

Lee also noted that Mubenga has a strong track record when it comes to minority students, and that equity in education will be a priority moving forward.

In his closing statements, Mubenga revealed his overall goal for the district.

He said, “I want to make Durham Public Schools the best choice for students and parents.”

Nile Foxx is a senior photojournalism major at the UNC-CH School of Media and Journalism. An Iowa native, this fall he is serving as photo editor of the VOICE.