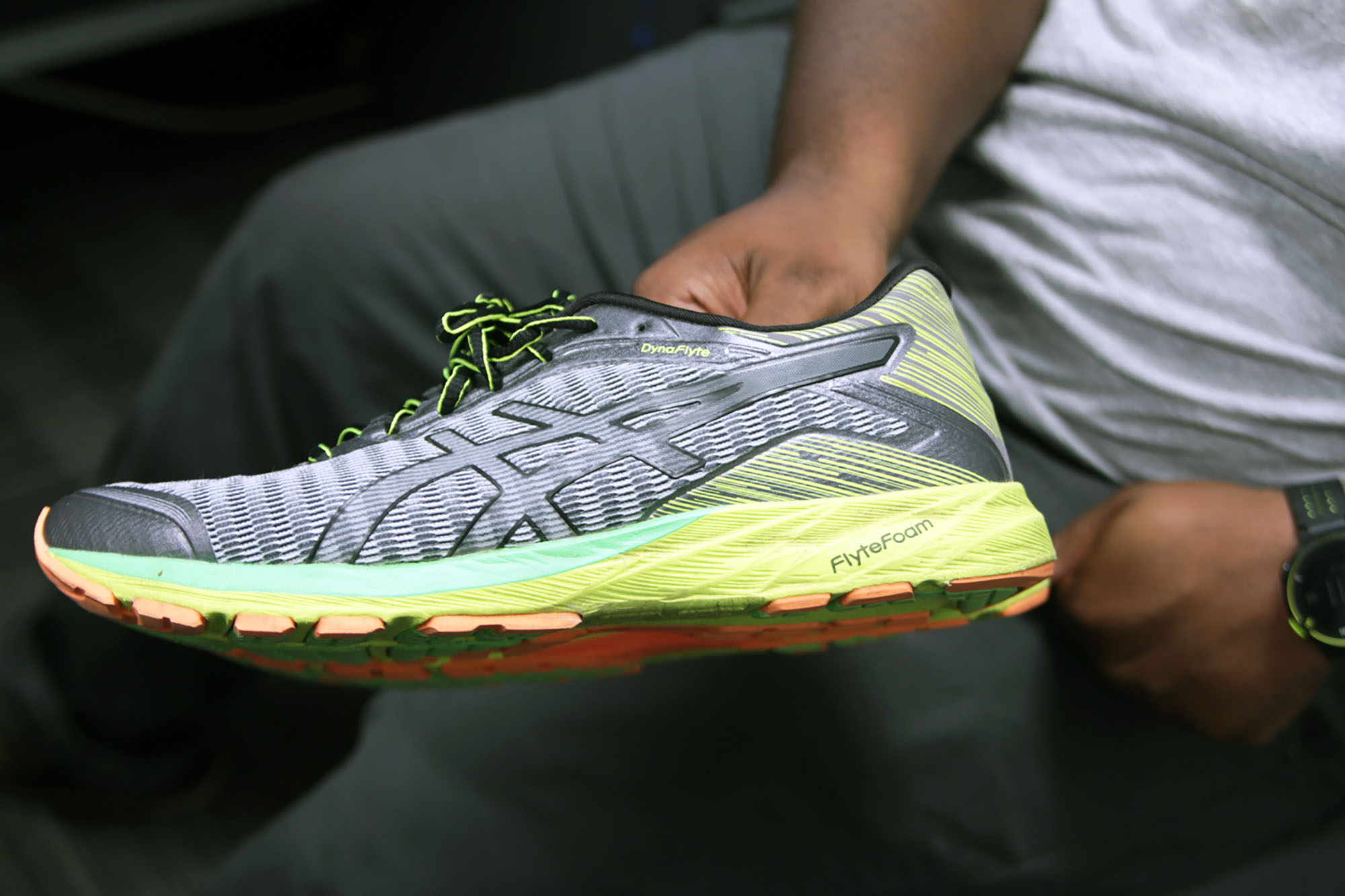 Casual joggers and athletes may get up in the morning to run for all intended obvious health benefits; lose weight, improve self-esteem, and prevent disease. But for North Carolina State University Economics professor Jason Coupet and a few of Durham’s running clubs, exercise is just part of the health equation for an advantageous lifestyle.

A life-size illustration of NBA superstar Derrick Rose printed on Coupet’s office wall pays homage to both their Chicago roots.

Before work in the morning Coupet drops both his kids Sasha and Zeke off at school, he then meets up with other joggers to run.

“The biggest reason I am out there is stress. All of us particularly black folk are burden with stressors,” Coupet said. 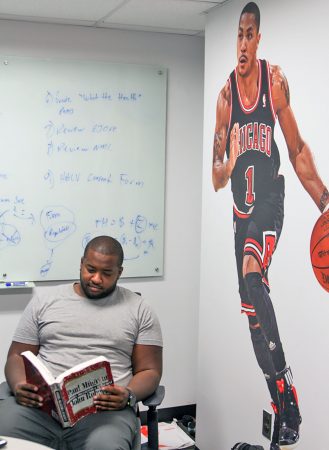 Jason Coupet closes out another week of teaching class with a quick reading session of Economics, Organization and Management by Paul Milgrom. (Staff photo by Autavius Smith/NCCU)

Since relocating to Raleigh after finishing graduate school in his hometown of Chicago at the University of Illinois, Coupet thinks Durham is the right place for community building.

Coupet’s transition from the frigid Chicago weather with his wife Qiana has allowed him to run outside all year, especially in Durham.

“I never felt unwelcome in any part of Black Durham. Not Northeast Central Durham, not Southside, Duke’s campus is a little different,” Coupet said sarcastically.

At 7:30 am on Saturdays, Coupet and fellow Black Men Run members jog a four-mile loop around the Lofts at Southside, ending up at Nzinga’s Breakfast Café.

The first Black Men Run was held July 2013 in Atlanta; it has now amassed more than 45 chapters in the U.S., including two in London and Paris.

“BMR is kind of more open, to be honest it’s just really a group of guys who run together,” Coupet said. “We have on BMR shirts, it’s a black man run group we ain’t doing nothing but running.”

Mathew Thompson, a good friend of Coupet and also captain of the Raleigh-Durham-Chapell Hill BMR group brought his team out once again for another outing. His arrival sparked a small conversation with Fleet Feet Sports.

“This started as promotion for the Bull City Race Festival that was coming up last Fall. We started doing these runs once a month, but Matt came out and I noticed we had this really nice presence from BMR,” said Jill Thomas, Fleet Feet Sports fit specialist.

Thompson, known for his ringleader-like capabilities, continually invited different runners to tag along with his team each meeting.

“It kind of popped up and I missed the initial group meeting,” Kearney said. “Me and one of the other captains started running together. Then we met MLT and it kind of sprung from the three of us having group runs. We kept posting, we said let’s move it around, make it more accessible for other people.”

While heart disease is the number one killer in the United States, African Americans are at a greater risk for heart-related conditions, including high blood pressure, obesity, and diabetes. According to the American Heart Association, 60 percent of non-Hispanic blacks are obese. The effects of hypertension severely increase the risks for stroke and heart disease in blacks, many of the symptoms can go unnoticed.

“We kind of lead those and so running is a vehicle that can kind of combat that if not eliminate it,” Thompson said. 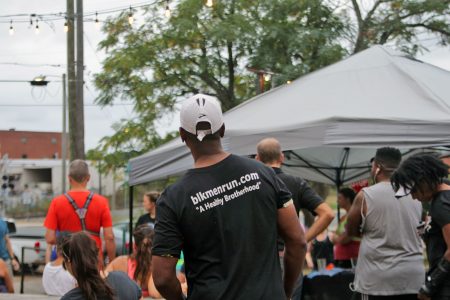 “We have so many stories of people losing weight, guys getting faster, people getting off the couch,” Thompson said. “We often look at it too as like a fraternity, but also like health insurance as well. You keep coming out you’re going to improve your health.”

For people like Coupet, running, being outside and pushing the body has given them a cathartic place to alleviate work-related stress or simply connect across race.

Northeast Central Durham joggers may have been skeptical to run four-years-ago but with groups like BMR, running has now become socially driven to improve the neighborhood friend base.

“I’d like to have 200 people here, but I’d rather have 40 who are really friendly and excited to come not two-hundred people who never talk to anybody new,” Thomas said.

Carl Smith is a junior journalism major at NCCU from Macclesfield, N.C., serving this fall as a staff writer-photographer for the Durham VOICE.