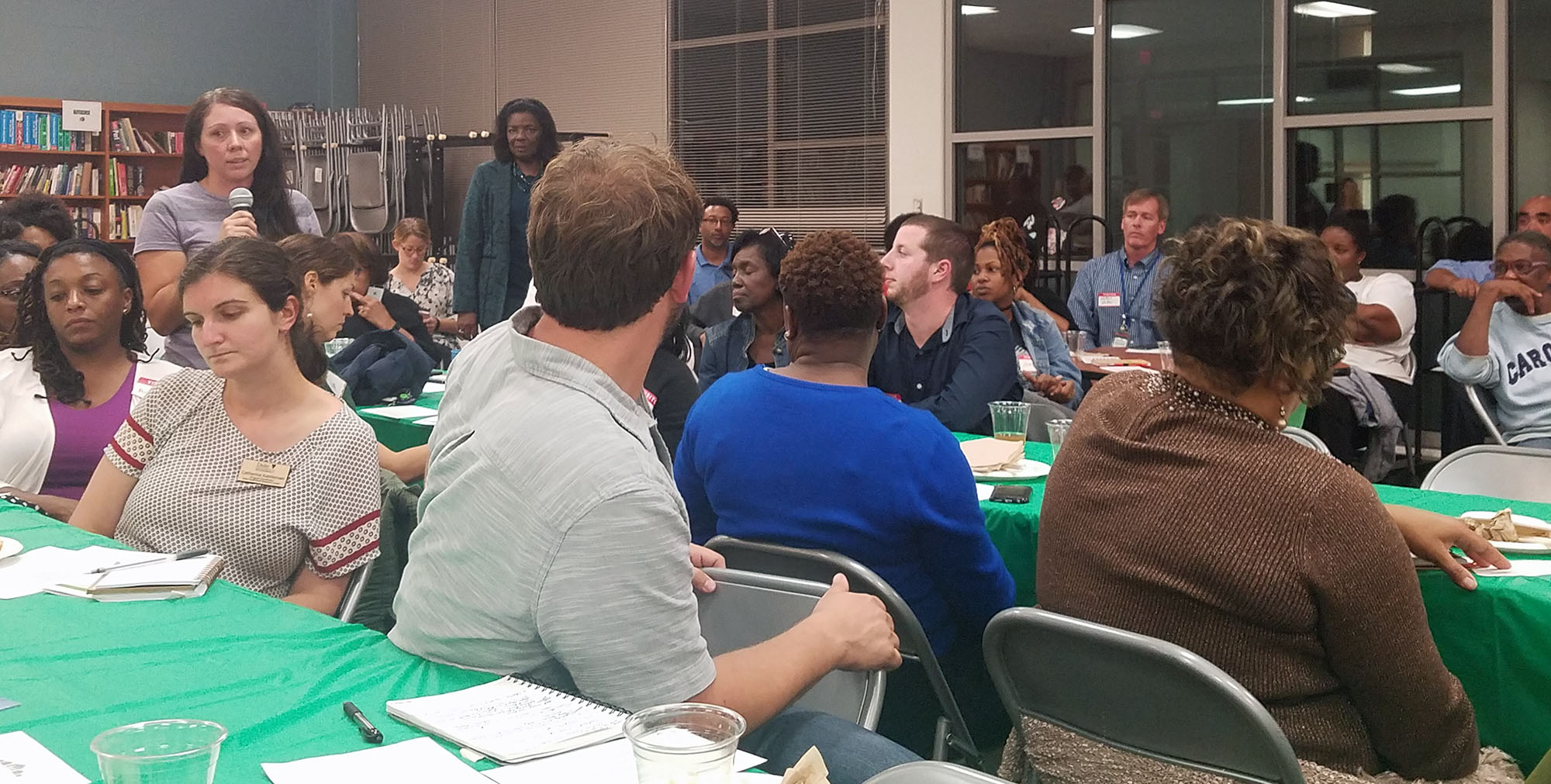 Holly Dwan shares her experiences with lead contamination in front of the more than 100 members of the community gathered at the Holton Center for PEACH’s town hall meeting to take action to protect children from lead. (Staff photo by David Fee)

Lead poisoning in children poses a serious risk to children in Durham, and late last month, PEACH hosted a town hall-style meeting and dinner to talk with community members about their concerns with such hazards.

“We wanted to give you some information about lead poisoning,” said La Verne Reid, the host of the event. “But we also want to hear from you, what your concerns are as it relates to this issue.”

Lead poisoning is most often found in lead-based paint in houses built before 1978. The disturbance can create dust or paint chips which get absorbed or ingested into a child’s body.

Warren Richardson of the Durham County Environmental Health Department has been working with lead since 1995, and he gave insight into the scope of just how many children are affected by lead contamination.

However, these were just the confirmed cases, which calls for two tests over the span of a year. Children with just one test show that up to 86 children are contaminated with lead.

“Any lead in a child less than six years old is a problem,” Richardson said.

Lead can cause developmental and behavioral issues in children, though in many cases lead does not show any immediate symptoms. The only way to confirm that your child might have elevated blood lead levels is to get them tested.

NECD parents Tiffany Graves and Holly Dwan live on Holloway Street, and have taken proper precautions to make sure their homes were safe, but it was a neighboring house that caused contamination to their properties.

“The situation that happened at our house in July 2016 when our neighbor water blasted lead paint off of their house, which is in between [mine and Holly’s], and this water blasting was done for the purpose of removing the paint,” Graves said. “But there was no containment done, so all the paint landed around our properties.”

Graves and Dwan pointed to a photo on the projector of white paint chips scattered all around their neighbor’s yard, which is currently vacant. Because the contamination did not happen on their properties, Graves and Dwan have found that there is little that local government can do to fix their problem.

“Our children have been blood tested several times, which is traumatic for children,” Graves said. “All of our children have fortunately been negative, except Lucy who did have non-elevated lead levels, but it was not negligible, it was higher than it should be.”

As a result, the mothers have restricted their children from playing outside in their yard.

Graves and Dwan have pursued a legal court case for their situation, but their real goal is to change legislation so that it doesn’t happen to other families in Durham.

“Tiffany and I did speak before one of the city council work sessions, and our story was well received, and they genuinely care and are passionate about the environmental contamination,” said Dwan. “They have tasked folks with looking into and researching other ordinances so that we as a city we can incorporate lead language into our building code.”

While any building built before 1978 has a high risk for lead-based paint contamination, Danielle Spurlock, an assistant professor of city regional planning at UNC Chapel Hill believes Durham is at a higher risk than other places when looking at the problem through a racial and ethnic lens.

“Slavery is an antecedent to a number of policies that put black and brown populations that had been marginalized historically over time to the point that we see this correlations between current elevated lead levels and historic levels of enslavement,” Spurlock said.

During the “white flight” movement of the 20th century, white populations left the city centers with the much older houses to live in the suburbs. Because of housing inequality, these homes now inhabited by the black and brown populations are more likely to have lead disturbances that can cause contamination in children.

“We know that lead has an industrial legacy, research in many communities show that systematically black and brown communities are less likely to be protected by zoning such that industrial uses are separated from residential uses,” Spurlock said. “We see that many low-income communities have industrial uses that contaminate the soil, the water, the air, in a way that we aren’t seeing in more historically white communities.”

Still, Spurlock stresses that it is the responsibility of the tenants to ensure that their housing does not contain lead-based and other hazards.

“Too much of our housing is affordable because we have allowed it to become dilapidated,” she said.

Even just testing for lead-based paint can be expensive, costing around $300, and the proper removal costs much more than that.

“We live in a neighborhood quite close, and I’ve had a daughter with high blood levels,” said Sara Patten. “One thing that we ran into is that we had a contractor say, ‘We know the rules, we follow the rules,’ but yet when it came down to it, they didn’t.

Patten didn’t have her home officially tested for lead-based paint, so she feels there is little legal action she can take to fix her contaminated home and yard.

“We’ve actually scraped the dirt out of the yard,” she said. “I don’t want to just cover it because my kids like to dig.”

All contractors dealing with lead-based paint hazards are required to have an official certificate of training. If you want to know whether your contractor is certified you can call the Health Hazards Control Branch at 919-707-5950.

Solving the lead contamination issue in Durham is not an easy one, but PEACH Executive Director Lenora Smith urges members of the community to stay involved and voice their opinion at all levels of government in order to start making legislative changes to protect children from lead poisoning.

“Tonight’s event is called the town hall to take action to protect children from lead.” Smith said. “Action is the foundational principle towards success. Without action, this is just a good dinner and a night out. Now we need to take action.”