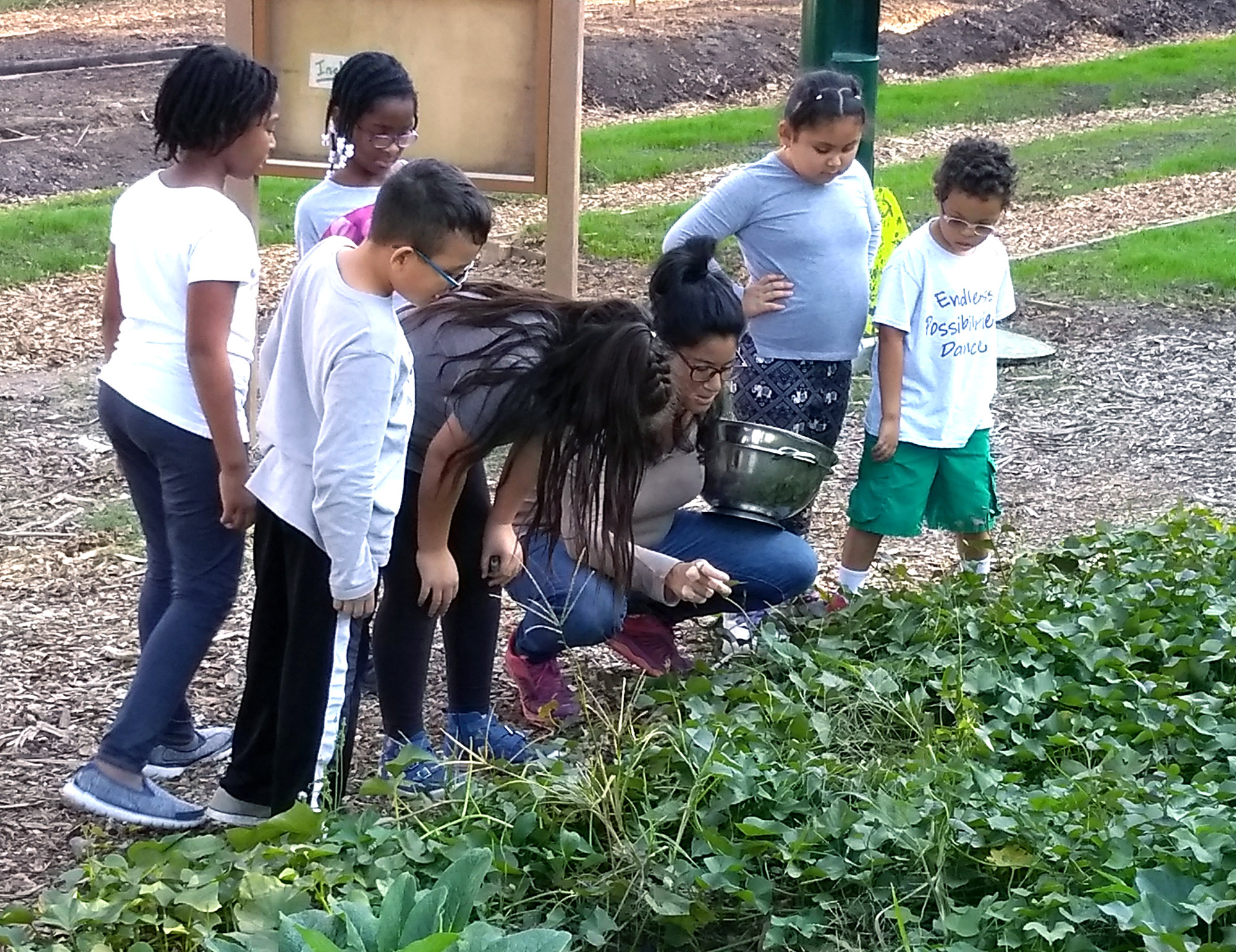 Sumi Dutta in the garden with the SEEDlings kids. (Staff photo by Vanessa Luo)

Raise your hand if you have eaten sweet potato leaves before.

Sumi Dutta’s request was met with silent, but inquisitive stares.

SEEDS, located at 706 Gilbert St., is a nonprofit garden that imparts the importance and knowledge of co-existing with nature through the growing, cooking and sharing of food. SEEDlings is SEEDS’ after-school enrichment program. Dutta, 27, of Durham, was recently hired this September as the Chef Educator for SEEDlings. 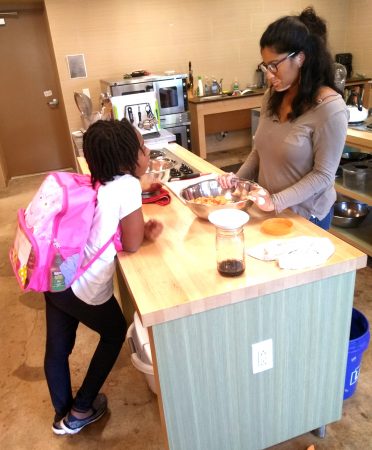 Dutta had previously worked for SEEDlings during the summer of 2012. She volunteered for the summer camp cooking classes. Despite her trajectory to her current position, Dutta didn’t learn to cook until she was 21.

Between her time working at SEEDS, she took on a number of jobs, such as working at an affordable housing nonprofit in New Orleans, got her master’s degree in Gender and Sexuality studies and taught feminist cooking classes for queer people of color in Atlanta. After returning to Durham, she found the newly established Chef Educator opening and applied for it without hesitation.

As a Chef Educator, Dutta plans her cooking lessons for the students, who range from first graders to fifth graders, around the availability of fruit, vegetables and herbs from SEEDS’ two-acre urban garden.

Dutta also accounts for a variety of factors when choosing recipes. Besides food allergies, there’s a time constraint as the students become easily distracted over time. As a result, Dutta typically chooses recipes that will be ready in less than an hour or she will prep ahead of time.

Due to the changing seasons, many vegetables and fruits that were plentiful during spring and summer will soon be out of season. And as last week’s theme was seasonality, Dutta decided to cook using sweet potato leaves to teach the students about seasonality. 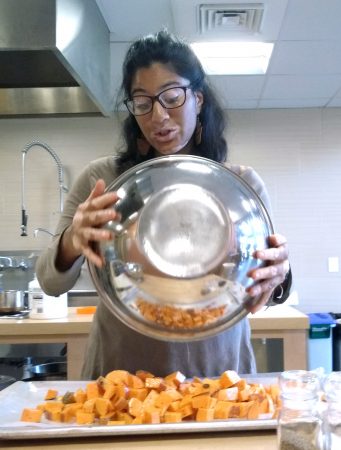 Sweet potatoes are available year-round and are especially plentiful from late October to December. On the other hand, many of the vegetables and fruits that the students tended to, such as blueberries, are only available during certain seasons.

This week’s recipe was sautéed sweet potato with green onions and crumbled feta.

As Dutta began to prep for the recipe by cutting and seasoning the sweet potato, the students trickled in one-by-one.

Sniffing, some commented, “Is that coconut?” and “It smells like coconut milk.”

In comparison to their peers, the students at SEEDlings are much more knowledgeable about plants. Most of them can identify the plants in the SEEDS garden.

One of the reasons Dutta loves her job is because working at SEEDS allows her to have a relationship with the plants – the food she cooks with. She also loves that she can “geek out” about herbs and plants.

Dutta said one of the coolest plants she has ever seen was a cinnamon tree. 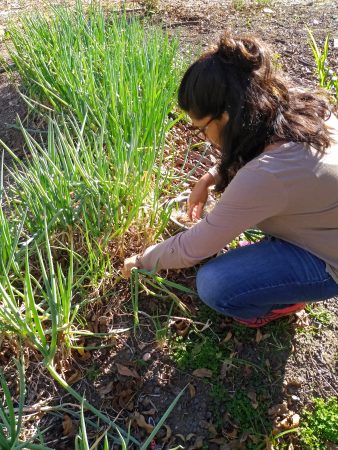 “It was like meeting an ancestor,” Dutta recalled her awe at seeing the tree for the first time. “You’re the spice I use in all of the things I cook. I see you in all these different forms, but I never saw the source.”

After Dutta distributed the food to the students, she said again, “Raise your hand if you have eaten sweet potato leaves before.”

This time, every hand shot up into the air.

Dutta writes down her recipes for the students’ families as many students want to make the recipes at home, too.

Dutta said she loves her job is because she can help connect the students with nature. On some days, the SEEDlings students love to pick lemon balm from the garden to drink with tea.

“Being able to teach here,” she said. “I think that feels right to me.” 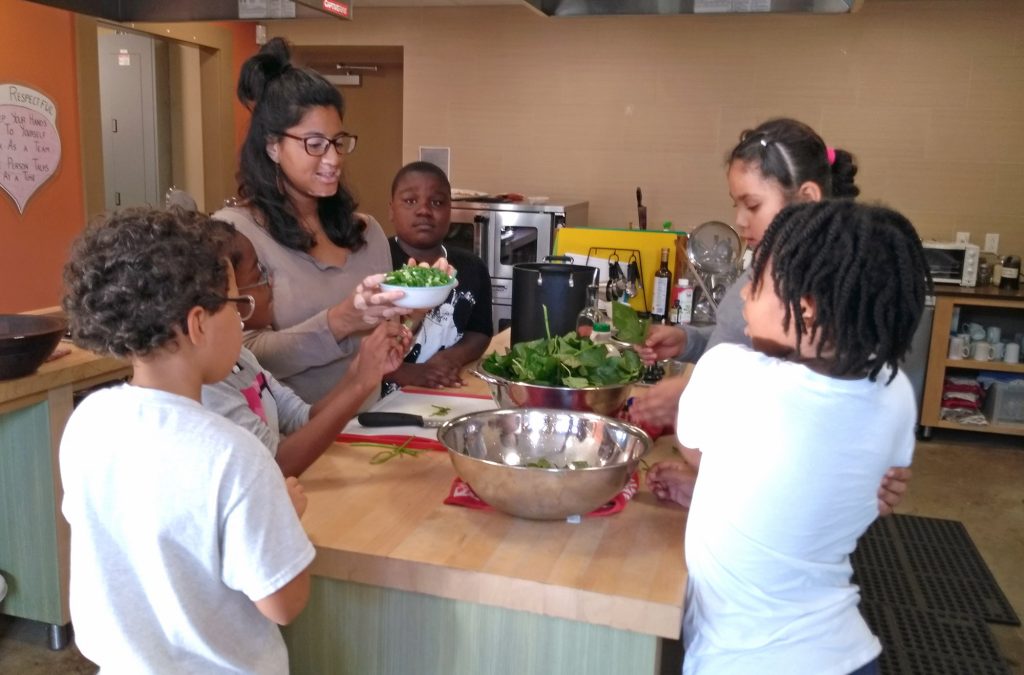 Vanessa Luo is a journalism student at the UNC-CH School of Media and Journalism. This fall she is serving as a staff writer-photographer for the VOICE.