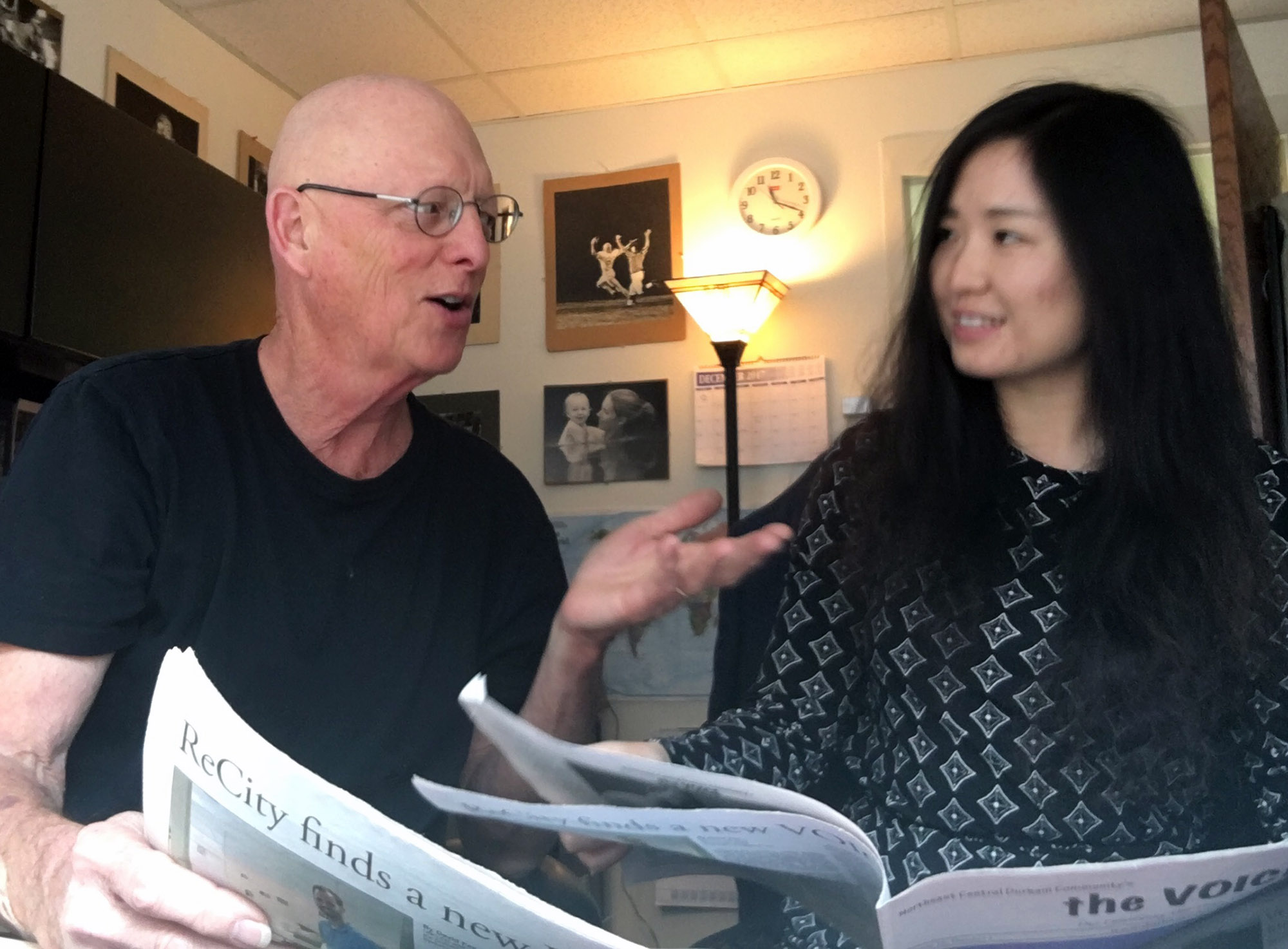 Editor’s Note: Lu Xu is a 10-year veteran Chinese broadcast journalist who, for the last two years, has been studying communications at the UNC-CH School of Media and Journalism, where she is a visiting international scholar. In her final semester at Chapel Hill, she joined the MEJO 459 “Community Journalism” class and became a part of the Durham VOICE staff and family. Here, “LuLu” looks back at the semester.

Why I chose this class in Community Journalism

I still remember how excited I was when I first looked at the course schedule and was informed of having the chance to attend some of the classes.

Scrutinizing the schedule from beginning to end several times, I was astonished by the subtle classification and the foresight of the curriculum. 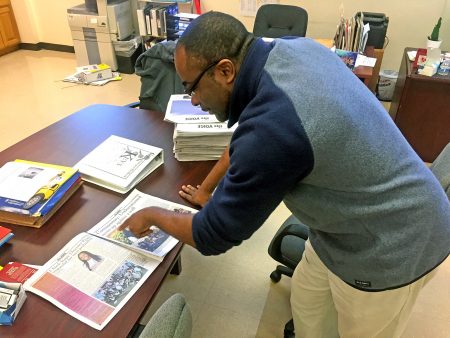 I saw something I was quite familiar with—Writing, Editing and Audio Production; I also saw something that perfectly fit in our time—-Digital Journalism, Data-Driven Journalism, Interactive Communication Technology. And I found something I’ve been confused about and had no clear thoughts since the first day of being a journalist: Ethics and Gender Issue based on various cultures.

However, I skipped something which I didn’t realize how it would influence me in the future — Community Journalism.

Before choosing my last semester’s course, I kept recalling people enjoying the farmers’ market in Carrboro with full baskets of fresh local plants and dairy, people in the Root Cellar chatting with each other with cheerful voices, flyers about recent events or non-profit organizations posted on billboards on Franklin Streets or Starbucks.

I still remember three or four elderly ladies peacefully holding signs at the corner of Elliot Road in support of civil rights — and young kids in front of the public library selling cupcakes to collect money to help their high school newspaper.

All of these sights impressed me deeply. I don’t think I would have found coverage of these local events in the Wall Street Journal or the New York Times, but for me they are the key to getting to know the country; they are real life of the place; they are mirrors of the society.

I finally realized what I wanted to learn in the last four months of my time in U.S. was local news, local journalism, or namely community journalism.

With the willingness to get involved in the society and to find answers to these questions, I walked into Jock’s class, met “Ferk,”  his co-teacher, and those talented young students —which turned out to be one of my most valuable experiences in U.S.

It’s a totally different classroom environment, and very different from my experiences, both in China and in the past 18 months in U.S. The instructors and those junior and senior students compose a team and a family, and they do things together.

I, as an observer, got a bunch of opportunities to join them, go to Durham with them, meet people and get to know this society from a completely different perspective— that of the committed community journalist.

The differences between our two cultures always brings up questions. In some situations, questions I was curious about seemed entirely normal for most Americans — especially civic engagement.

‘Civic engagement’ is the term I learned from Jock, ‘That means every citizen realizes his or her importance in the system, in the community, in the neighborhood — and then acts upon that realization.”

In the past four months, I saw people who contribute their time to help build up their community. I also met veteran North Carolina journalists who have devoted their whole lives to community journalism.

What these guest speakers have accomplished and their beliefs helped me to define the term of ‘civic engagement’ and, to some extent, answer almost all my questions. In my point of view, civic engagement is one of the core values of American culture, which helps to explain why community journalism is still flourishing in America.

Just after Thanksgiving, I had the privilege of interviewing Carlton Koonce, the workforce development director for the youth development NGO, “Partners for Youth Opportunity.”

Koonce and Jock have been working together on the VOICE since its beginning, almost nine years ago.

Introducing the work of PYO, Koonce showed me the perfect example of how citizens can devote their time to their community and how that community rewards its citizens.

As a mainstream Chinese journalist working in a state-owned news agency, it’s kind of a tradition for me to ask questions relating to government.

‘So, Koonce, what’s the relationship between PYO and the local government?’ I asked.

“Personally, we try to stay away from government.” Koonce answered honestly.

See? Here is the thing: I might have expected answers like, ‘Our government is so supportive and they have lots of policies to encourage our work…’

But I totally forgot that I’m in a different country with absolutely a different culture and beliefs. It turns out that PYO depends on the whole community for its support..

“The community knows better (than we do) what we need.” Koonce said.

That’s how I learned all the financial support for PYO comes from personal and corporate donations as well as from grants. During the interview, I was surprised by the trust that PYO has built in the community,

Koonce told me, for instance, if there is a kid who is short $300 dollars for her scholarship, what Koonce does is go directly to a known PYO donor, and he’ll come back with a $300 check.  “They trust us,” he says.

Koonce is a hard-core fan of the VOICE. When opening the newspaper, he can name almost every person in the photographs. It’s a strong sense of belonging, something like, ‘I’m so proud of these people, I like this family.’ There was a moment I envied him being a member of this family. I think the relationship between him and the paper might be the epitome of the relationship between readers and community newspaper in the U.S.

There is no other way to teach community journalism better than to produce a community newspaper. Jock told me one of the purposes of the VOICE is to get down to the civic engagement.

“I think every time we do a story on somebody in the paper, that gives them a sense of  ‘Hey, if they do story on me,  maybe I’m ok.’  It can lift people up, one by one.’

Additionally, Jock said the other responsibility of community journalism is to encourage civil discourse.

He told the class, “In the present volatile, partisan political climate in the U.S., a civil discourse is more important now than ever.”

There is no free speech in China, which affects the development of community journalism directly. If people are not allowed to speak freely, then they may become indifferent and indolent sooner or later. Instead of being a part of something larger than ourselves as a part of society, we Chinese prefer to focus on family, real family. The lacking of civic engagement leads to some phenomena here that I am curious about: the American tradition of donating, praising personal value, flourishing non-profit organizations and a sense of belonging to the community All these things seem to be a basic part of American daily life. Given the differences in our two cultures, I think it’s understandable why there is so little success for community newspapers in China.

For me, one of the charms of community journalism is the mutual trust — readers give credit to the newspaper, and the newspaper serves readers sincerely.

Since it’s highly unlikely that such an American model would work at my mainstream Chinese news agency, I’m still thinking about whether or not it can apply in some other way. Just like what Jock said to me the other day when we talked about the influence of technology, “Fiber is not the issue,” he said, “The issue is great local reporting, which we need now more than ever.”

Why don’t we take advantage of social media and other interactive tools to build up community beyond geographic limitations and serve people with the same beliefs and pursuits?

There have been other occasions in the past that I have heard other J-school students and professors talking about the trending in media industry. ‘Have you heard about BOT?’ or ‘Did you see how they report news by using of VR?’

There is no doubt that these are eye-opening experiences for me. But on the other hand, the more information I get about the future, the more lost and anxious I can feel. I want to get back to the roots of journalism to find out what makes journalism valuable, and I think this class has given me the answer — being a part of our society, being a part of something larger than myself, caring about people — and seeking and telling the truth.

I was deeply touched by one student in this class at the end of this semester. He said that after reporting on peoples’ lives in Northeast Durham, his attitude toward this community has changed; he couldn’t bear to hear people say bad things about this place.

The same change happened to me, too. I think this is what Jock called “community heart.”