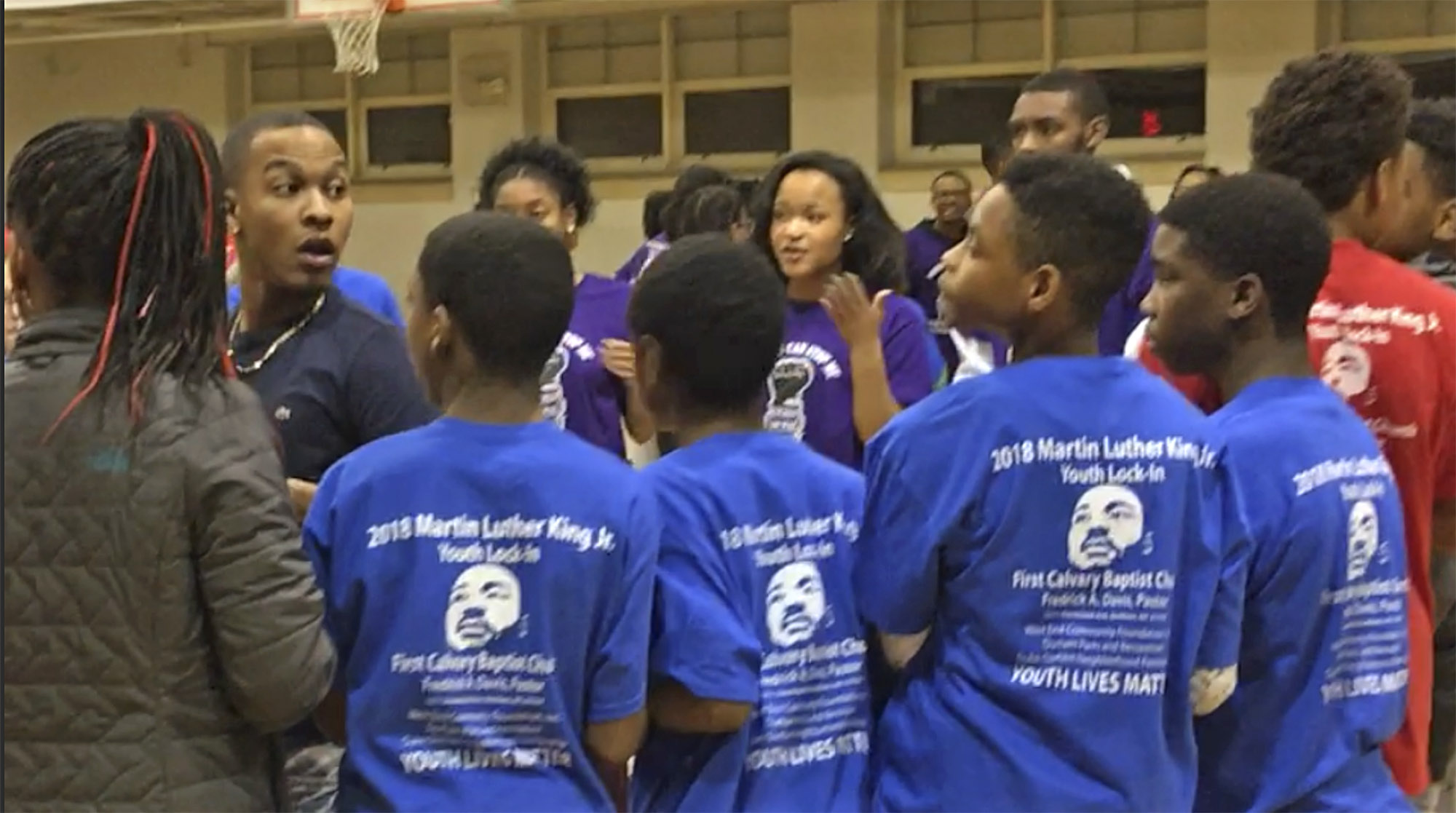 Shed Poole (left) returned to the MLK Day Lock-In as a chaperone for the first time this year. Shed attended the lock-in every year as a teenager. (Staff photo by Cole Villena)

Two weeks after New Year’s, hundreds of West End residents came together once again to celebrate a cherished American holiday. Posters of Martin Luther King Jr. replaced brightly-colored 2018 banners. Coffee, not champagne, was the drink of choice for adults at the Community Family Life and Recreation Center at Lyon Park at 1309 Halley Street. 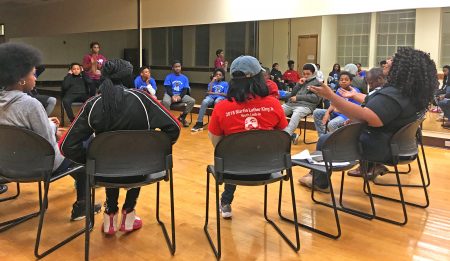 Another key difference: this celebration lasted all night long.

For 26 years, the First Calvary Baptist Church MLK Day Lock-In has provided West End students a place for fun, learning and community-building during their long weekend. The result of collaboration from groups like Durham Parks and Recreation, the Durham-Duke Neighborhood Partnership and the West End Community Foundation, the event has become a community tradition since it was first held in 1992.

Fredrick Davis, who has served as First Calvary’s pastor since 1991, says the event was conceived as a way to fill an often-overlooked gap in the education of his church’s students.

“When Martin Luther King Day became a national holiday, schoolchildren were out,” Davis said. “There was nothing creative for them to do­ or anything centered around the life of Dr. King.”

Davis knew this had to change.

He hosted the first lock-in, which was attended by a dozen students from First Calvary in the church’s basement. Students spent the night playing games, sharing snacks and engaging in group discussions about teen and community issues before joining the MLK Day march in downtown Durham the next morning. The 125 students at this year’s lock-in participated in similar activities. The march has become a highlight for students and volunteers. 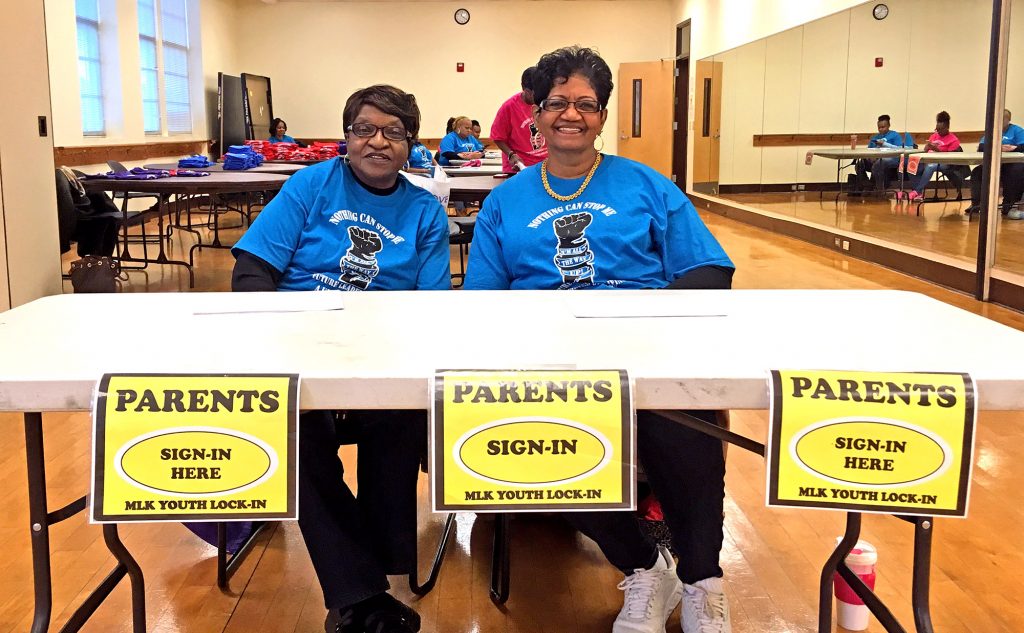 Willie McCullers and Donna Mack have volunteered at the MLK Day Lock-In since it began in 1992. (Staff photo by Cole Villena)

A large part of the event’s success, Davis says, has been its ability to stay relevant by providing for students in new ways each year. The small group discussions have evolved into full-fledged workshops that focus on topics such as career-readiness, dating and healthy social media use. Each lock-in also has a central theme; Davis smiles when asked about this year’s.

“‘I’m All the Way Up,’” he says, quoting both the Grammy-winning rap collaboration between Fat Joe and Remy Ma and the T-shirts worn by this year’s lock-in participants. “’I’m not going to let nothing crush me or push me down. I’m standing All the Way Up.’ The climate of the country calls for that (message).”

Amber Burgin, a Duke Divinity School student who facilitated “town halls” between students and Durham School Board member Xavier Cason, believes that an emphasis on empowerment and unity is more important now than ever before.

“Given the climate that we live in politically, emotionally and socially, it’s important for the students, particularly in Durham County, to get an opportunity to be together utilizing the goals that Dr. King had about bringing people together,” she said. “The earlier we get people engrossed in community and teach them about how community can lead to peace… that’s an opportunity for them to learn how to make that a permanent thing.” 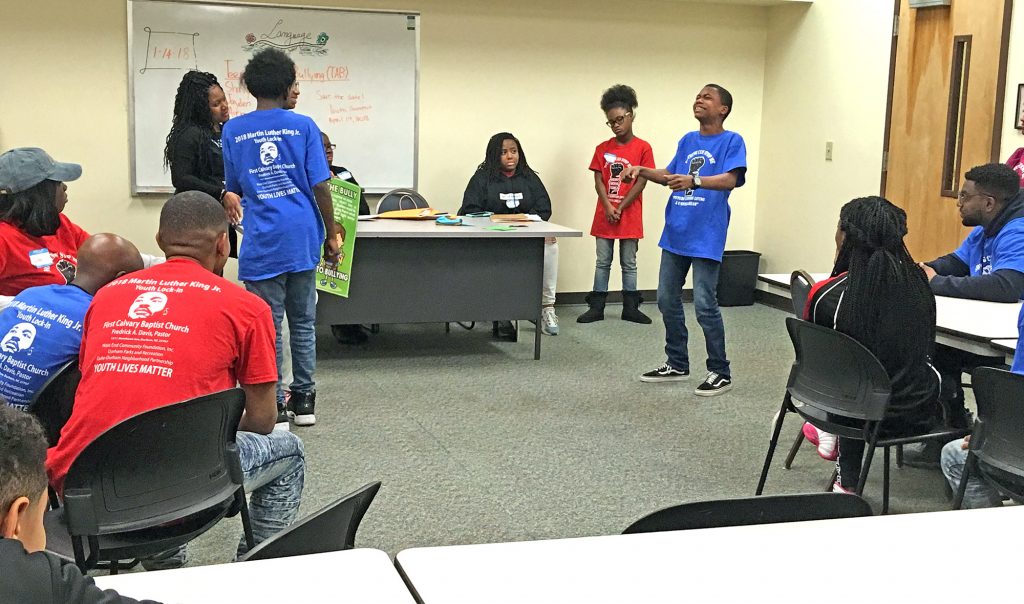 Students perform skits in an anti-bullying workshop. Shed Poole is seated on the left facing away from the camera. (Staff photo by Cole Villena)

26-year-old Shed Poole attended the MLK Day Lock-In every year as a teenager and returned as a chaperone for the first time this year. As he watched his group of 12- and 13-year-olds prepare to battle in the annual dodgeball tournament, he answered immediately when asked what made the event so special to him.

Poole, who owns a cleaning business in the Durham area, was already a superstar among his students by the time the dodgeball tournament began. The highly-decorated dodgeball veteran did something he’d never done during a tournament: he sat on the sidelines and took a break, hoping to save some energy for the long hours ahead of him.

It was only midnight after all. His night had barely begun. 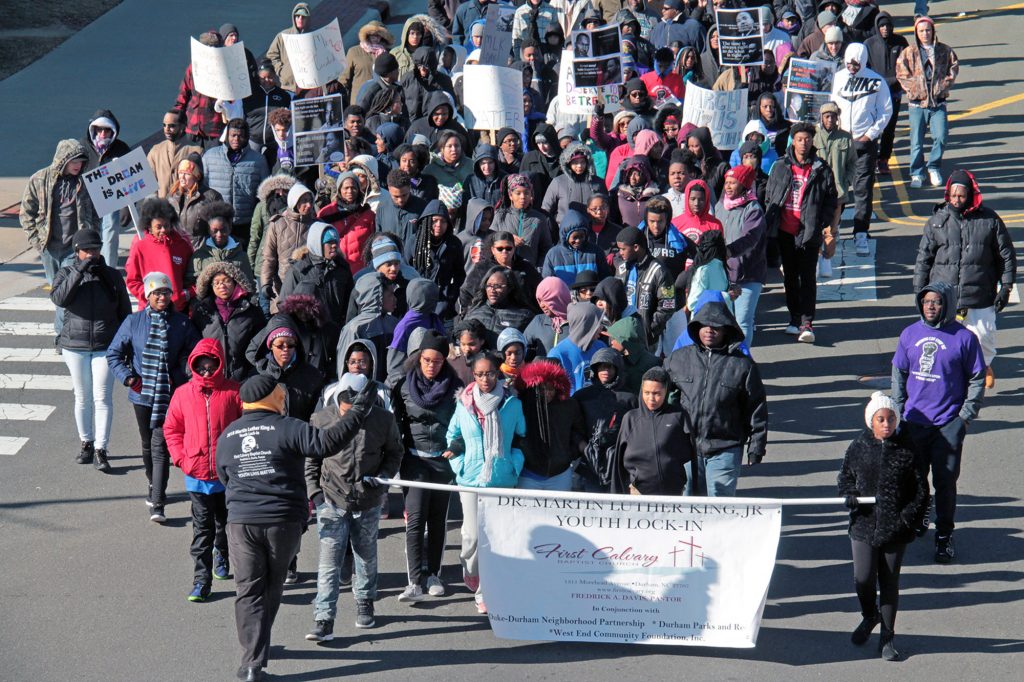 In the early morning chill, youth from the MLK Lock-In walk down Chapel Hill Street in the annual Durham MLK Day rally and march. (Staff photo by Jock Lauterer)