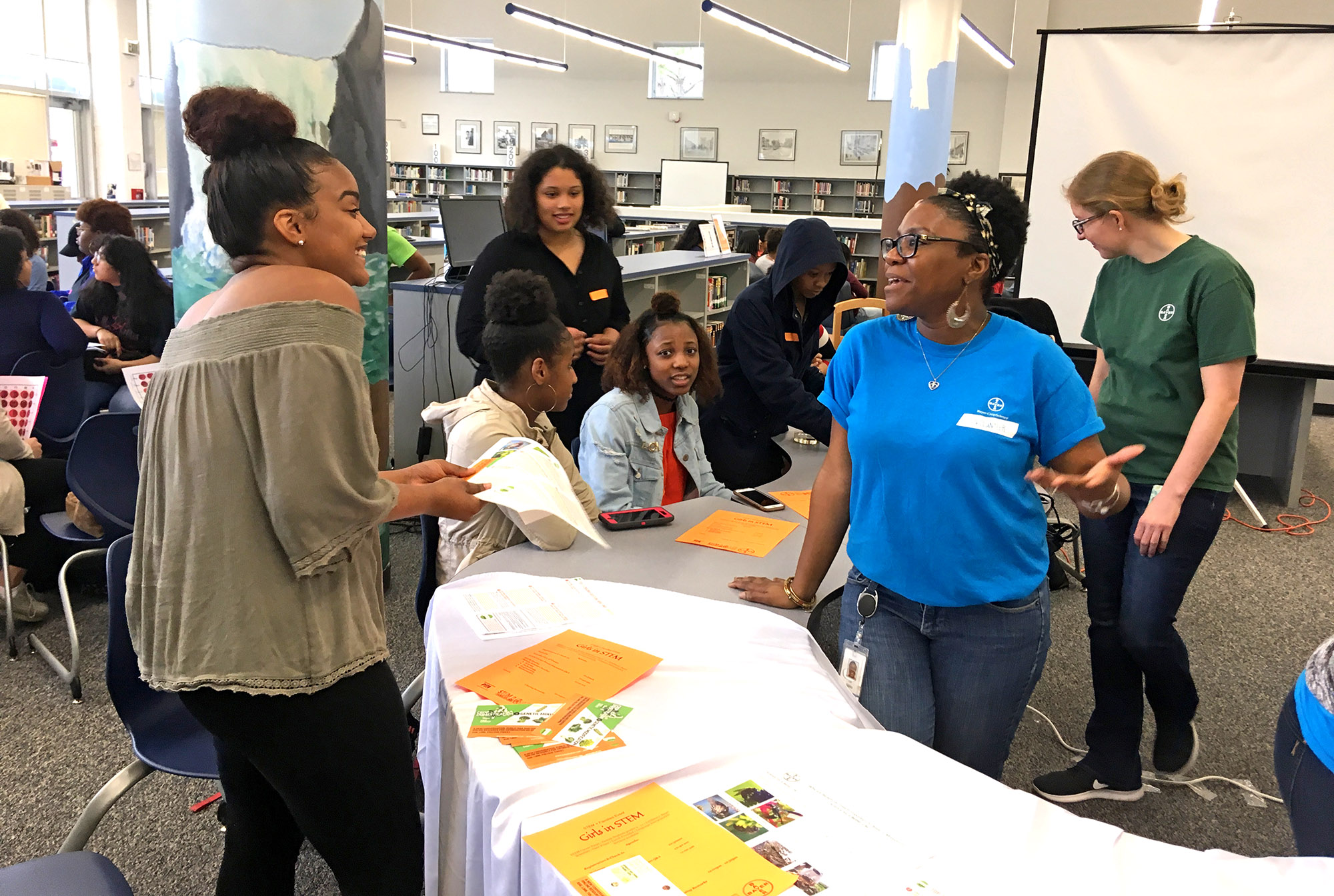 On Thursday, Feb. 22, young women at Hillside High School’s Girls in STEM event were challenged to change that number. A group of 64 female students gathered in the school’s media center for hands-on exposure to STEM careers, including a panel discussion featuring local STEM professionals and presentations about topics like drones and supercomputing in agriculture. 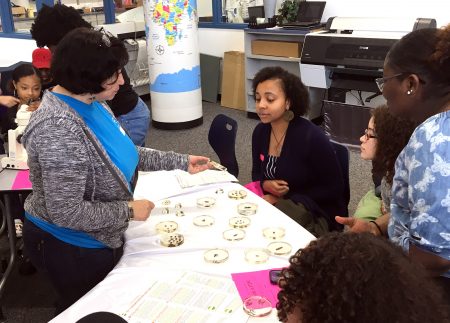 Yasmin Cardoza (left) shows Hillside junior Dominika Lee, 17, one of the insects she studies as an entomologist. “They’re very enthusiastic,” Cardoza said of the students she spoke with, “and I think they’re also very hopeful. (Staff photo by Cole Villena)

Hillside junior Dominika Lee said the event challenged her perception of what it means to be a scientist.

“When I think of science, you usually think of experiments and chemistry…” Lee said. “ I never really correlated that with working with insects and the environment and helping people.”

The event was a collaboration between the Durham Council of PTAs and Bayer Corporation, connecting students from Hillside with STEM professionals in the Triangle. Eleven Bayer scientists, including high-performance computing technicians, microbiologists and agricultural engineers, attended the event.

“It’s really interesting to see all these different women coming from different backgrounds with different careers and different college experiences all joining together with the same power behind them,” Lee said. “It’s important to know that there are other options for you other than just basic, stereotypical jobs of a woman.”

Connecting with each other

During their presentation, Yasmin Cardoza and Lou Gibbs allowed students to experiment with microscopes and other lab equipment as an introduction to entomology, the study of insects. Both women agreed that there were few examples of successful women in STEM when starting their careers.

“I want to serve as a role model for young women so that they can see that there are women specializing in science and entomology and different areas that they can look up to,” Cardoza said. 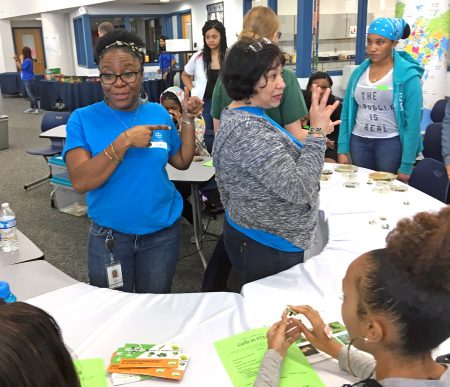 Lou Gibbs and Yasmin Cardoza (gray sweatshirt) explain how entomology, the scientific study of bugs, can be used to develop new ways to protect crops. (Staff photo by Cole Villena)

Gibbs agreed, adding that she gets a “fulfilling feeling” from connecting with young women.

“I love science,” Gibbs said. “But, over the past three years, what I get more fulfillment from is outreach. Talking to youngsters about my story. Answering any questions that they have… Sometimes, the kids don’t even realize that (a STEM career is) an option for them.

“It’s important because I know that we are capable, and sometimes we are underestimated,” Gibbs said.

Hillside sophomore India Dias, 15, felt empowered by the opportunity to meet successful women in STEM and by the knowledge she gained through their presentations. She especially enjoyed a presentation given by Alyce Fowler about how a high-performance computing architect can use a scientist’s “crazy ideas and data” to create a working computer system that can solve real-world problems.

“If she can do all of this with just one computer, it can mean the world if more girls can do this, too,” Dias said.

Girls in STEM at Hillside was the last of three similar STEM education events organized by the Durham Council of PTAs as part of National PTA’s “STEM + Families” initiative. In October, the council hosted the STEM + Families Community Fall Festival at R.N. Harris Elementary School, giving elementary and middle schoolers a similar opportunity to engage in hands-on experiments and activities.

“This was an amazing event,” said Francelia Burwell, the council’s Vice President of Community Engagement. “The kids had a great time. … We could see the sparkle in their eye(s).”

Durham Board of Education Chair Mike Lee was present for the first half of Girls in STEM and said that he would love to have this type of event at each of Durham’s public high schools.

“One of the things that we understand as a school district is having people that look like yourself… coming to talk about things that might interest you fully, increases interest and fully increases the possibility that you would actually take a look at these industries,” Lee said.

“Not everyone here is going to be in a STEM career, but now they have the option,” he said. “Now they’ve been exposed to this. They can say, ‘Okay, I like that.’”

Presenters said they drew just as much inspiration from the event as the students they’d met throughout the day.

“The students were brilliant,” Cardoza said. “And they were so curious and so full of energy and life. There’s just so much hope for everything that they can achieve in their lives.”