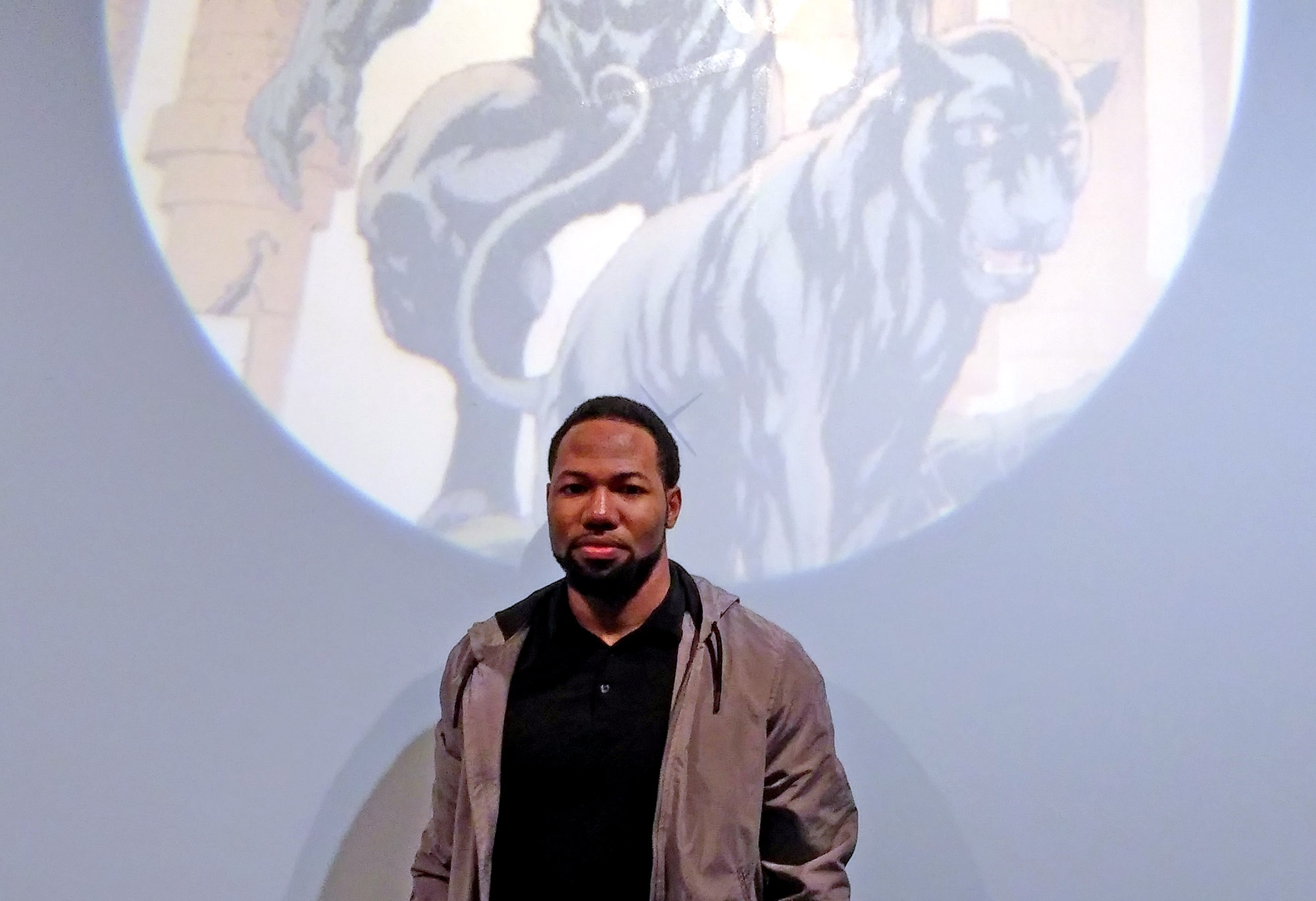 Online fundraisers with the hashtag #BlackPantherChallenge are trending. Teenagers in Durham get to see the first black comic book superhero on the big screen.

Black Panther is a 2018 American superhero film based on the Marvel Comics character of the same name. The latest blockbuster in the Marvel Cinematic Universe is helmed by a black director, black producer, and a majority black cast. The film stars Chadwick Boseman as T’Challa who is both the superhero Black Panther and the king of Wakanda; a secret and highly advanced nation in Africa.

The first GoFundMe in the #BlackPantherChallenge was created by Frederick Joseph, a New York resident who wanted take kids in Harlem to see the film. The success of the campaign as well as many others following the challenge inspired CJ Guion to bring it to Raleigh.

CJ Guion is a member of the 100 Black Men Triangle East chapter and he’s lived in Raleigh for about 10 years. To Guion, the most important aspect of his organization is mentoring and community service. The Description of the Guion’s GoFundMe page is as follows: “The #BlackPantherChallenge is soaring across the country. Thousands of people are donating to give young bright minds a chance to see the Black Panther movie that will hit movie screens February 16th. I noticed that Raleigh didn’t have a GoFundMe set up and I believe the kids in this area should get a chance to see the movie too, and money shouldn’t hinder that.”

The screening was held at the Marble’s Kids Museum in Raleigh this past Sunday, March 4. According to Chonda Swann, the program coordinator for the 100 Black Triangle East Durham location, the event brought over 200 guests.

Guion says he didn’t expect the campaign to get as big as it did. When news outlets covered his fundraiser his expectations were surpassed again. The campaign launched on February 1 with a goal of $3500. Guion says it only took seven days to reach the goal. At the time of this writing 153 people have raised $5,891 in 17 days.

East Durham wasn’t the only area with a successful campaign for the film. Vanessa Ponce, a Student Life instructor at the NC School of Science and Math, organized a fundraiser for the Boys and Girls Club of Durham and Orange counties. She received enough donations for the screening as well as extra money to provide more for the Boys and Girls club in the future.

Black Panther stands out among other black led superhero films to Guion. “I think that one of the big things about this movie is the way that homage back to Africa.  It really puts Africa in a positive light.”

He also enjoyed the way black women were portrayed as fighters and empowering rather than “damsels in distress”. Ponce shared a similar sentiment when discussing an aspect she enjoyed about the film; the Dora Milaje.

“In the comics, the Dora Milaje are the best and strongest women from all over the nation of Wakanda and the best and are among the most skilled fighters in the Marvel Universe,” Ponce said. “They played a major role in the film and I appreciated that they were not sexualized as women frequently are in comics and in film.”

Representation and diversity in media are often brought up online when discussing Black Panther. “I think it’s very good we have a representation in the media” Guion said. His favorite of the two leads in the film was T’Challa (Boseman) and felt the character was very influential.

Swann’s favorite lead was also T’Challa. She says she appreciates how the character stood for truth. “We all have to stand for something. So we want to stand for truth and we want to support our community and support our youth in a way that is meaningful.” In addition, Ponce picked T’Challa as well because she always sides with the hero.

As for diversity in media; Swann believes it’s important because we are moving into a global world. “Having the opportunity to connect with other ethnicities, with other groups, is an awesome opportunity for our youth to see there is power not only in numbers but there’s power in diversity.”  She pointed out the event drew in all ethnic groups and explained that it was awesome to see everyone coming out, supporting each other and watching the film together.

Ponce says representation is important because it allows the viewer to see relatable and powerful role models that look like them. “If no one in media looks like you, then it sends a message that you’re invisible or not important. Representation can give a voice to marginalized groups who are frequently overlooked or ignored.” Ponce adds on how representation can combat negative stereotypes and as a Latina she would love to see films with broader roles for Latino characters.

Black Panther features social commentary. Political themes such as utilitarianism, monarchy, colonialism, open boarders, and even police brutality are discussed in the film. Ponce says children will understand Killmonger (Jordan)’s rage over how he and other black people across the world have been disenfranchised and disempowered.

Swann believes the age group 13 and over can identify with the themes. “There were some parts in the movie that resonated with me that I’m going to go home and have that conversation with my son to see what areas resonated with him.”

Corin Hemphill of Charlotte is a senior journalism major at NCCU serving this spring as a staff writer-photographer for the Durham VOICE.