Valencia Lipscomb, in front on red, dancing along with her one her blend classes. Intermediate, proficient, and advance levels are part of this class. (Staff photo by Zayrha Rodriguez)

Back in 2006 the Durham native, Valencia Lipscomb, was the second freshman in the history of Hillside High School to make it to Company—one of two dance groups in Hillside Dance Company. 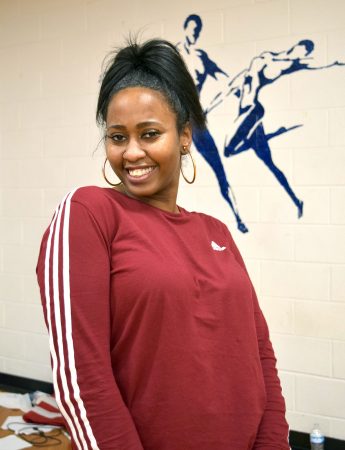 Valencia Lipscomb says her passion is to dance and to teach kids to dance. (Staff photo by Zayrha Rodriguez)

Twelve years later, Lipscomb is the teacher for the Hillside Dance Company, which includes the two dance groups called Company and Sting, as well as all dance classes offered at the high school.

“She is a great teacher,” said Hillside senior Isaiah Edwards. “She is different because she breaks everything down, but makes it fun for you to learn the dances.”

Even though this the first year for Lipscomb as the dance teacher at Hillside, it has not stopped Hillside Dance Company from succeeding.

This is the second year in a row that Hillside has won first place in the Best Overall High School team at the 2018 North Carolina Scholastic Dance Festival.This year the competition took place on Feb. 17, at the Durham School of Arts.

All students—regardless of their level of skill—are welcome in the dance studio, said Lipscomb.

Dance classes at Hillside High School count as an elective, and they are divided into four levels: beginner, intermediate, proficient and advanced. Those who want to continue dancing and improve their skills can tryout for Company or Sting. Tryouts take place at the end of the spring semester each year.

Sting is the most advanced dance group at Hillside Dance Company. Dancers in Sting travel to performance venues during the school year.

“We travel a lot,” said Lipscomb. “We have to do a lot of community performances, like in churches other schools—elementary and middle schools. We go out of town and do conventions in Philadelphia and Atlanta.”

While seniors’ time at Hillside is coming to an end, many want to continue to dance in college.

Edwards says he plans to attend Durham Technical Community College and aspires to become a designer and keep dancing.

Lunsford is planning to attend East Carolina University to major in biology, but will keep dancing in addition to studying.

Two seniors will attend North Carolina A&T State University, where they will be part of the Golden Delight auxiliary. They perform during the football games alongside the marching band, flag line and dance squad. 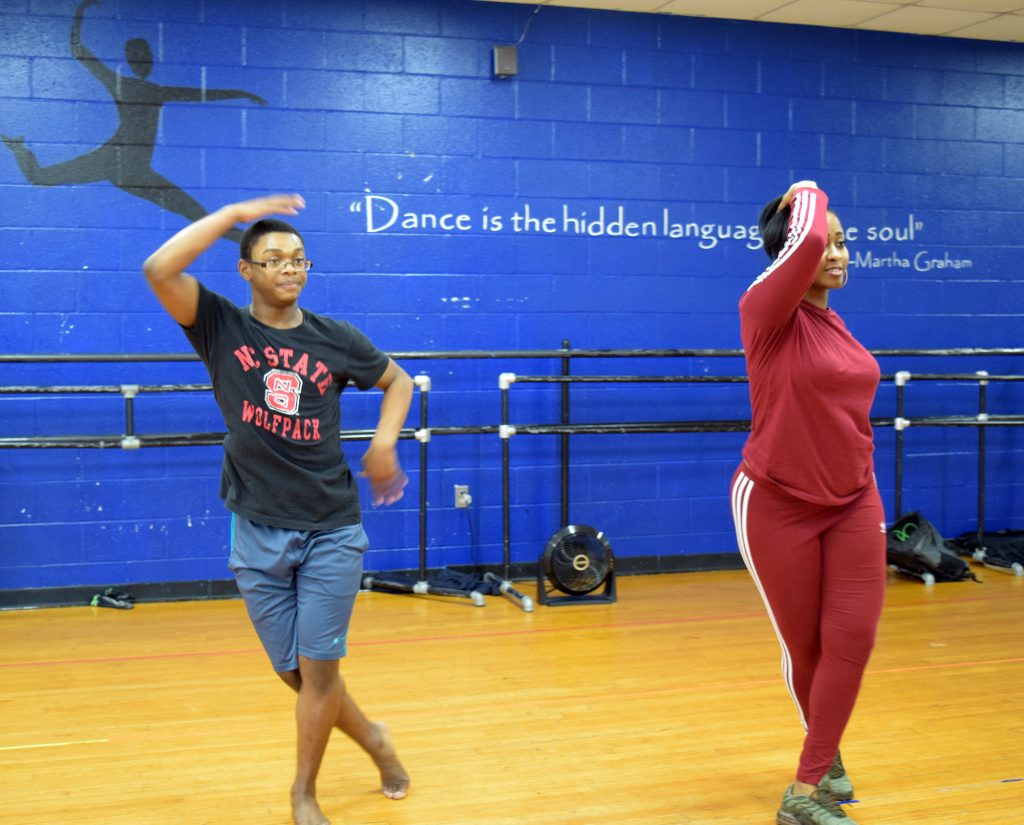 Valencia Lipscomb working on a new choreography with Elisiah Wright, a junior at Hillside and a member of STING, for the Spring Concert that will take place on May 11. (Staff photo by Zayrha Rodriguez)

Lipscomb says she never dreamed of becoming a public school teacher, but when she discovered her former dance teacher, Nicole Oxendine, would stop teaching at Hillside, she wanted to step in.

“I didn’t want to see the particular group of girls that I have now not have any structure to the program,” said Lipscomb.

In the spring of 2017 Lipscomb was hired as the dance teacher assistant, and in August 2017 she became the new full-time dance teacher. 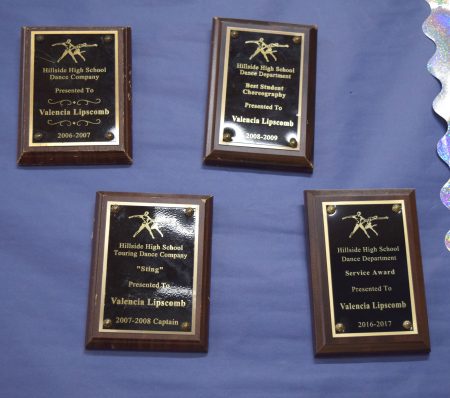 Some of the prizes Valencia Lipscomb has won during her time as student and teacher at Hillside High School. (Staff photo by Zayrha Rodriguez)

During Lipscomb’s junior year at Hillside she won best student choreography for her class project. She still keeps her project on her desk, and shows it to her students when she assigns the same class project.

The class project requires students to draw dance formations, record movements and keep a journal about the process and their progress.

“It is practicing for professionalism and growth,” said Lipscomb.

After her high school graduation, she attended UNC Greensboro, where she double majored in dance and business administration.

In January 2015, Lipscomb moved to Atlanta in order to pursue her career as a dancer.

“When I moved there I really didn’t know people,” said Lipscomb. “You gotta go to the studio and get your face out there.”

Since then, Lipscomb has made appearances several on-screen. She was in the Netflix original movie “Step Sisters,” Fox’s “Star” and in “Greenleaf” broadcasted on the Oprah Winfrey Network.

During her free time, Lipscomb taught at Dance 411 Studios, a dance school in Atlanta. Whenever she would visit Durham, she would return to her alma mater and teach small classes—she didn’t realize that this would prepare her for her next gig as a teacher.

“I’m like a mentor to them, and that is what is the most important about teaching,” said Lipscomb.