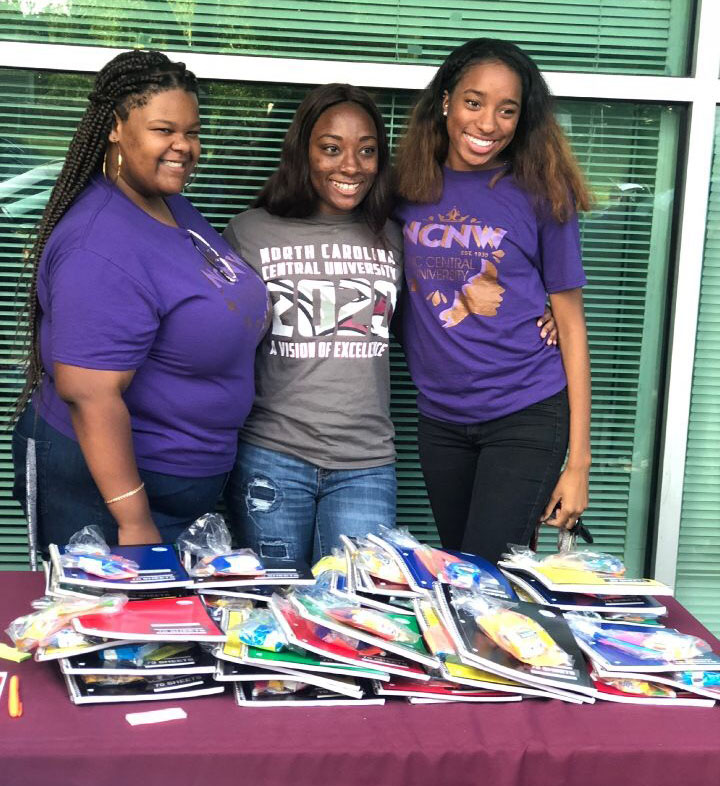 N.C. Central University’s Men’s Achievement Center and National Council of Negro Women teamed up with Burton Elementary School to hand out school supplies to kids on their first day of school on Monday, Aug. 27.

This event was planned as a way to connect with the community and increase engagement because schools make up a significant part of the community. Dr Kimberly Ferrell, principal of Burton Elementary described her feelings before the event as “excited” because she knew that the impact was going to be a great one.

The NCCU students set up a table outside and laid out notebooks, folders, pencils, crayons, and more for the kids. They lined up along both sides of the pavement to await the arrival of the wide eyed elementary students.

As the cars pulled up, and the kids got out, a round of applause went to every student. They walked down the line of volunteers, high fiving anyone who stuck their hand out and to the table to pick up their new school supplies.

After the event, Dr. Ferrell described her feelings as “still excited.” She said the kids loved it and she felt honored to have NCCU helping out.

“Seeing the smiles on the kids faces,” was the best part of the event, according to Dr. Ferrell. She received many compliments after the event even one from a student saying he felt “like he was a part of the community.”

Next year, the school plans on doing the same thing, but bigger. The only thing they would do differently is invite the news.

The President of NCNW, Precious Davenport said she was ecstatic when finding out about the event because of her love for working with children. She and the rest of her organization sisters contributed by setting up each notebook with a folder, pencil, and a flashcard with a quote on it.

“We did a tremendous job. Everyone played their role in helping the kids with their first day back,” said Davenport.

A couple of the Burton students from 1st to 5th grade said when they saw all the people outside of their school, their emotions included scared, nervous, shocked, and excited. Many of them said they felt happy to receive an applause and school supplies. One parent even suggested to start school like that every day. After having a great morning, the kids said their day continued to get better while attending their classes.

This event set a high tone for the school year at Burton Elementary. It was a wonderful sight seeing everyone dancing, singing, getting along, and most importantly, greeting the kids with smiles and school necessities.