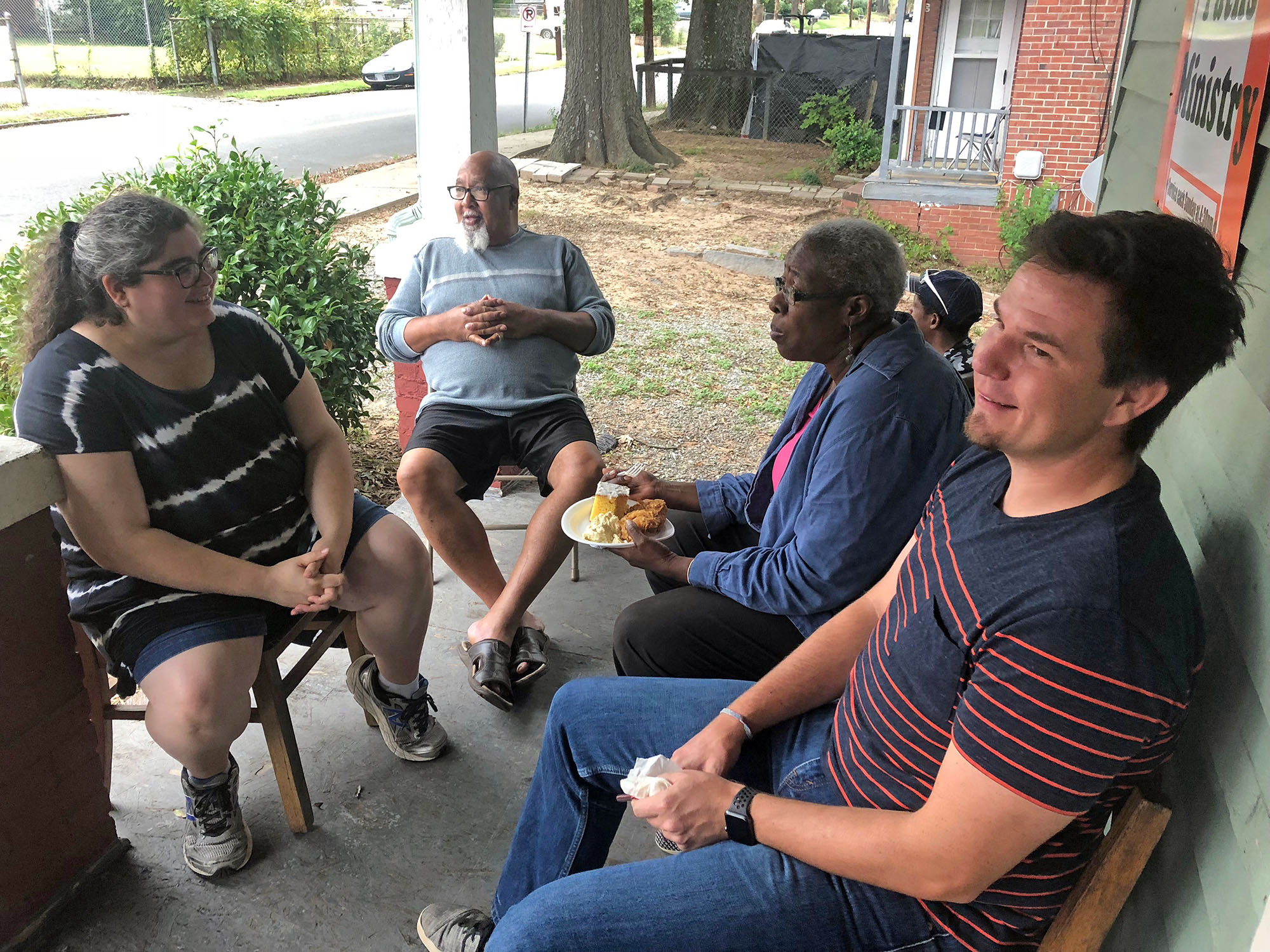 Allen Jones' front porch on North Guthrie Street is a gathering place for volunteers and those in need in East Durham. From left to right, Pastor Breana Von Velzen, Pastor Allen Jones, Pastor Dorothy Clark and the Rev. Bruce Puckett congregate after a Sunday sermon on the porch. ( (Staff photo by Tirzah Villegas)

As cooler weather knocks on our doors, Change Paths Ministry (910 N. Guthrie St.) opens its doors, welcoming those in need of clothing or food.

Change Paths Ministry, located in East Durham, was founded in 2015 by  Pastor Allen Jones and his son, Tyrone (Redd) Nelson. From Jones’ home, he takes in donations of socks, jackets and blankets for local children and adults who might need them. Food is also included and is currently funded straight from Jones and volunteer Pastor Dorothy Clark’s pockets, along with occasional donations. 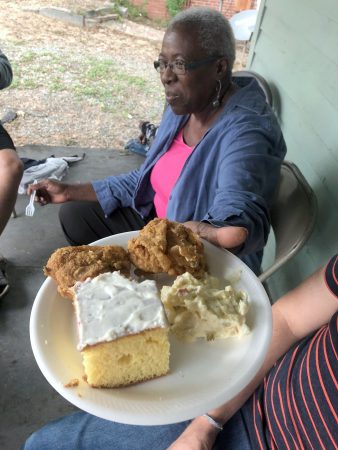 Meals at Changing Paths Ministries may change, but it’s always a meat and a few carbs along with dessert. (Staff photo by Tirzah Villegas)

Every Wednesday and Sunday about 15-20 people are served hot plates of fried chicken, cole slaw, peas, potato salad and dessert. The number of folks is in addition to the people who come throughout the week to pick up “snack bags” from Pastor Jones’ home.

“As the ministry is looking to grow and support the community, it’s starting its mission small,” said Jones.

Change Paths Ministry originally started out when the elder Jones was inspired by his son, Nelson.

“Redd came to me with the idea of distributing clothing that was originally donated to the community,” said Jones. “Now the community knows this is a place it can come for resources.”

On Jones’ porch there is a picnic table that stays stocked with donated clothing that is then picked up by those who may need it.

Community members served range from children and adults to the homeless and families with jobs but still struggling to find food. In addition to clothing, from Jones’ front porch, every Sunday afternoon from 4:30 until after 6:30, people from the community gather to not only have a meal but to also chat.

Sometimes the dinner may be as simple as pizza, while at other times it’s donated meals that someone has cooked.

Change Paths Ministry provides the clothing and food that Pastor Clark, known affectionately as Pastor Dorothy, sometimes cooks in her kitchen and brings over to Jones’  home. 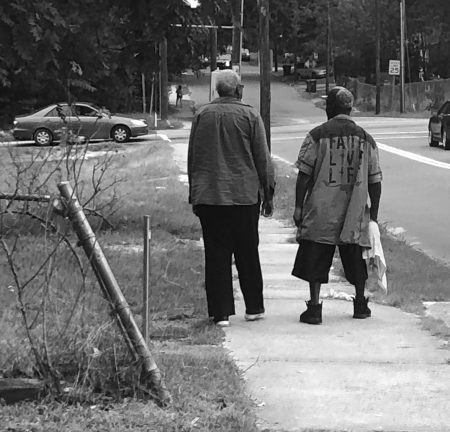 Pastor Dorothy Clark, left, walks along North Guthrie Street with one of the neighbors. (Staff photo by Tirzah Villegas)

Often Jones purchases food from local stores with his own money to feed those in need. At the ministry, there’s food provided on Wednesdays at 6:30 p.m. and on Sundays at 4:30 p.m after a short sermon. “People leave when the conversations end,” said Clark.

Clark, a teaching assistant at Duke’s Divinity School and who formerly served for 15 years as the deputy director of operations at the Nasher Museum, first joined Jones’ ministry two and a half years ago after being approached by Jones. (Correction: in an earlier version of this story, Clark’s job title at Nasher was incorrect. The VOICE regrets the error.)

Clark participated in a similar ministry in Roxboro and, after attending a service at CityWell Church, (which partners with Change Paths), has been involved ever since.

The clothing drive, a new addition to the other services the organization provides, was introduced by volunteer Tirzah Villegas through the partnership with CityWell Church.

“The beauty of this ministry is that community members know it is a safe place for some of their most basic needs to be met,” said Villegas. “The winter months are especially difficult, so we wanted to make sure that we were collecting as many of the necessities as we could before the cold hits.”

For the entire month of October, CityWell Church, located at 2317 Chapel Hill Rd., will be accepting donations of winter clothing and blankets — and especially, socks and jackets of all sizes. There is a bin outside of the church on the Huron Street side that is available 24/7 for drop-offs.

“This is the first time we’ve had an organized drive for people who may need clothes,” said Clark.

The church will be open on regular Sunday hours to accept donations.