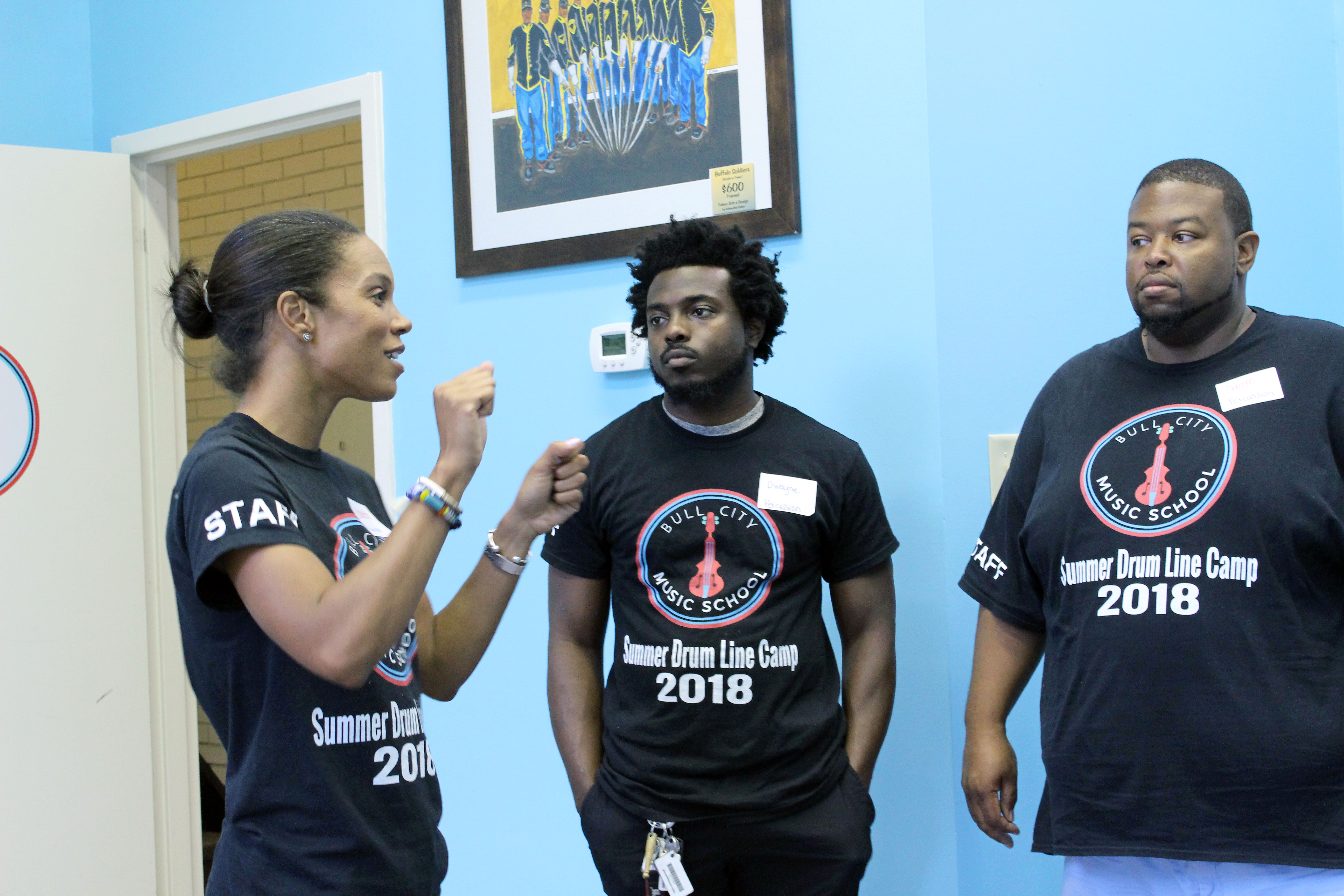 The music school offers students a way to express their thoughts and feelings using instruments. BCMS teaches lessons in all types of instruments, like piano, guitar, xylophone, marimba, drums, flute, trumpet, violin, viola and cello. It also offers “musikgarten,” “kiddykeys” and will soon be adding rock band classes to the list. The school offers sessions between August 20 and December 15 and classes can cost between $120-$220 a month and each session is either 30, 45 or 60 minutes a lesson once a week.

Hopkins says she decided to open the music school because she wanted to open opportunities up for the community.

“I wanted to spread the message of love, respect and self confidence,” Hopkins said. “In every school I worked at music was always cut first because it was always considered the least important subject.”

Hopkins, a Memphis, Tenn. native who relocated to Durham years ago, said when she got the opportunity, she took the chance and launched her own school. Hopkins’ mother and her great-great uncle, Rozelle Claxton, a famous jazz pianist, were both musicians, so her young life was enriched by music.

Hopkins attended Overton High School for the Creative & Performing Arts in Memphis and after graduating went to college at Jackson State University where she played in the symphony orchestra and also sang with the university choir. She graduated from the historically black university with a music education degree.

She said music is in her blood and makes her happy.

Hopkins started playing the violin when she was five years old. As she grew up she developed a love for music and wanted to share it with other children. That’s where the idea for her music school came from.

At the school’s recent open house, an aspiring flutist, Justin Lawrence, a 10-year-old who runs track for the Durham Striders, came in to see what it was all about. While he was there, he did some vocal exercises with a teacher that helped him improve his vocal skills.

He also played a variety of instruments, including xylophone, piano and drums. Hopkins and her staff noticed Justin playing the drums at BCM, and they commented that  he brought life to the room.

Music classes at BCM can be held either individually or in small groups with at most four people. Most of the classes are taught at the music school but some are held on North Carolina Central University’s campus.

Dwayne Jordan is a percussion teacher at BCM. He said they try to keep the environment relaxed but productive.

“The concept of the small groups helps learning great,” he said. “It motivates the students.”

Bobbiette Palmer is the mother of  8-year-old Brianna Lillie, who has been taking violin lessons.

Palmer said that her daughter is a mostly auditory learner and that memorizing music has helped her translate her learning back to school. She said BCM also has a unique way of incorporating parents into their child’s lessons.

“They have a great way of involving the parent in the classical Suzuki method which has allowed me to learn with my student,” she said. “It has created a bond between my daughter and I.”

Hopkins and her staff work together to help anyone from a young child to mature adult to become the best musician they can be. When recital time comes, the instructors work even harder to help the students get ready for the events happening twice a year — once in the winter and once in the spring.

Sometimes, when asked, they will also perform for different community events. For example, Bull City Music School hosts a popular summer drumline camp for students in middle and high school on NCCU campus.

Hopkins said music isn’t made for just certain people — it’s for everyone.

“We are a music school committed to advancing the calls for music education,” Hopkins said. “We believe that no person should be denied access to creative expression in the arts.”