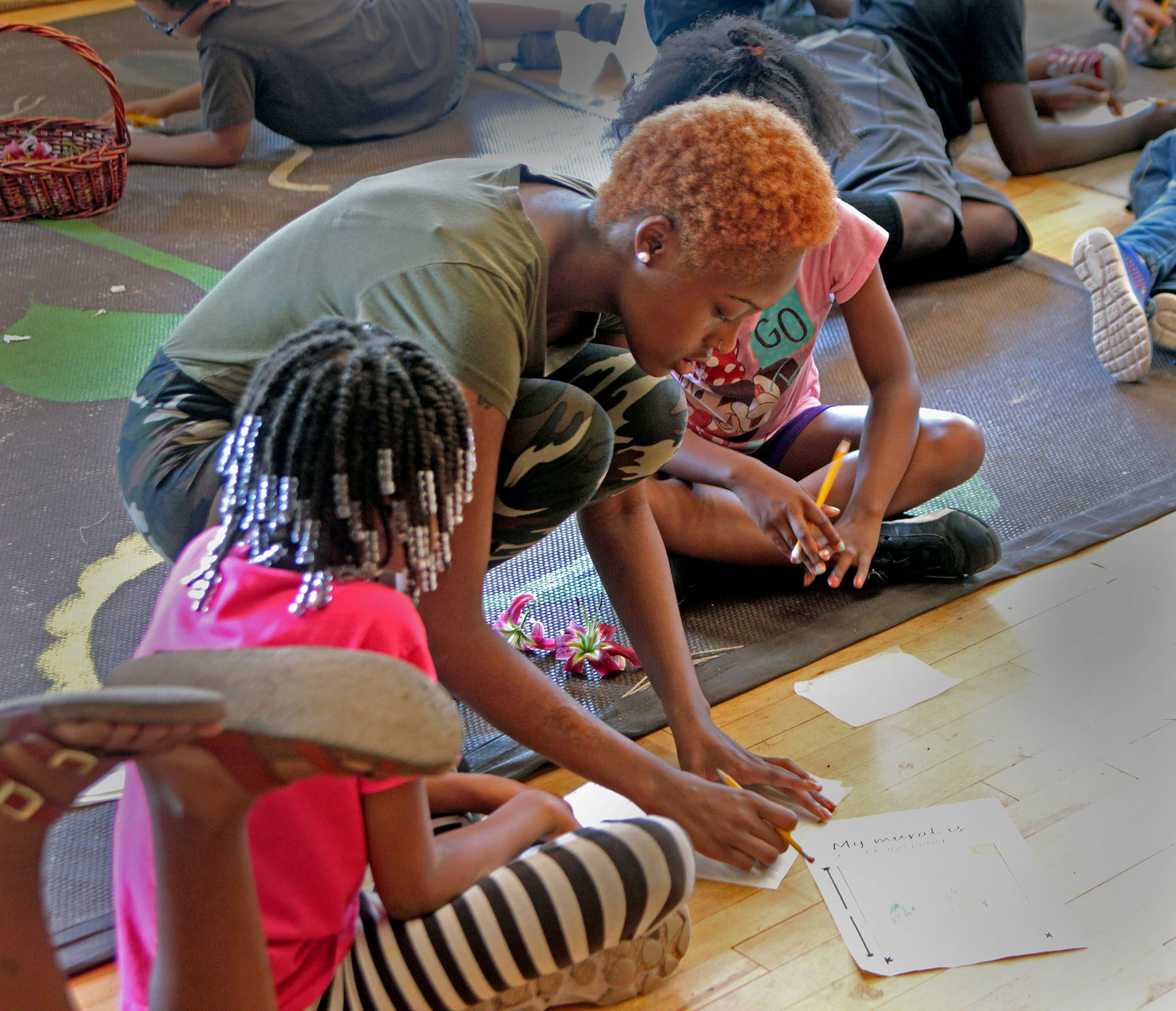 Veronika Payne, center, works a summer internship guiding students through activities at SEEDS, the urban garden in Central Durham. An aspiring artist now taking classes at Durham Tech, she has plans of transferring to UNC-Chapel Hill. As a high school senior, she recalls struggling with “senioritis.” Veronika is a PYO participant. (Staff photo by Cindy Chen)

As winter break ends and a new semester begins, high school students usually tend to buckle down to end the academic year strong.

However, for many seniors, it’s another story.

After college applications are all in and the college acceptances begin to roll in, many seniors often feel that is okay to take time to relax and rejuvenate. For some, once their school of choice has been secured, it means no longer being worried about getting into college.

It is also a time that seniors all over the nation often struggle to fight off the epidemic known as “senioritis.”

Although senioritis is often brought up in conversation humorously, the condition is actually in the dictionary. According to Merriam-Webster, senioritis is defined as an “ebbing of motivation and effort by school seniors as evidenced by tardiness, absences, and lower grades.”

Senioritis has even been blamed for some schools rescinding college acceptances from students who have not met deadlines of sending in requested materials or even claiming their spot in enrollment.

Veronika Payne, a recent graduate from the School of Creative Studies and now enrolled at Durham Tech, recalls how senioritis hit her like a ton of bricks midway through her senior year.

She said it was “the bump before her second semester and midterms.”

Payne described the feeling of senioritis like “sinking on the Titanic.”

“It’s like that moment when the ship has hit the iceberg and they say, ‘Women and children first!’ and you’re still worried if you’ll make it,” said Payne, explaining further, “You’re at the beginning of the end [of high school], but you don’t know if you’re going to make it.”

Payne said in her experiences this feeling is typical after students have received college acceptances and feel like what they’ve worked so hard for in the last four years has paid off.

Now in her first year of college, Payne talks about her experience candidly.

Looking back on her senior year, she said she remembers how it felt like everyone was too tired to engage in drama.

Some students left school early because they no longer had end-of-the-day elective classes, many could just go home.

“The mood felt very nonchalant, and everyone felt ready to graduate and get out of the school,” she said. “It felt like it was Wednesday every day, all year long.”

Another student, Samantha Beecham, a senior who attends Middle College High School, says, “I feel like a lack of motivation, and getting accepted into UNC-Chapel Hill feels nice to know that I am 100 percent going to college,” she said.

While she was accepted into Chapel Hill, she continues to wait on other decisions.

Dosali Reed-Bandele, academic director at Partners for Youth Opportunity, has worked as an educator with students and teenagers for over 20 years and once was a teacher within the school system.

Reed-Bandele said she believes senioritis indeed has some validity to it.

“Students deal with things differently when it comes to transitions,” she said. “There’s this mentality of ‘I’m ready to move on to the next stage.’”

She added that senioritis isn’t necessarily procrastination or being lazy, but more like students feeling older, so they may ask themselves if they really need people to help them figure things out.

Reed-Bandele said even she herself had some degree of senioritis growing up. She said sometimes it’s simply the realization of students that they’re about to hit adulthood and want to handle life on their own and at their own schedule.

“I believe it’s more of a feeling of taking charge of one’s own life,” she said.

Signs of senioritis that Reed-Bandele has noticed include students being less responsive than before, having an disengaged attitude about their studies and not owning up to responsibilities.

In short, senioritis is no less a real issue among students that professionals such as Reed-Bandele acknowledges and notices in students. But to those seniors who are struggling, senioritis is conquerable once considerable measures have been taken.

Beecham agrees. With the pressure of choosing the college that’s the best fit for her, she’s not letting senioritis get to her.

“I took the acceptance letter as a reminder that I still need to keep my grades up,” she said.