Varyssa Henderson (left of the boys) joins high school students from across Durham to sing "A Tribute to Queen." This was her favorite song to perform, she said. (Staff photo by Natasha Townsend)

The words, “You can do it” reverberated through Tiffany Agerston’s head.

She never forgot those words of encouragement, spoken by her chorus teachers when she was younger in an effort to get Agerston to share her singing talent at the annual “An Evening of Entertainment” (EOE) put on by the Durham Public Schools. Agerston eventually braved the microphone alone and sang her own solos as a performer in high school. Now, a chorus teacher at Hillside High School, she tells her students the same thing.

“Just having the teachers on the sidelines, it’s really encouraging, and that’s what brought me back every time, and it made me feel like I can really do this,” Agerston said. Agerston, 28, is one of the few chorus teachers who is responsible for teaching more than  500 student performers in “An Evening of Entertainment,” held at the Durham Performing Arts Center. The Feb. 8 performance featured elementary school students singing and dancing to Michael Jackson’s hit “Thriller,” middle school students acting to a song from the popular musical “Hamilton” and high school students paying tribute to Queen and Aretha Franklin. 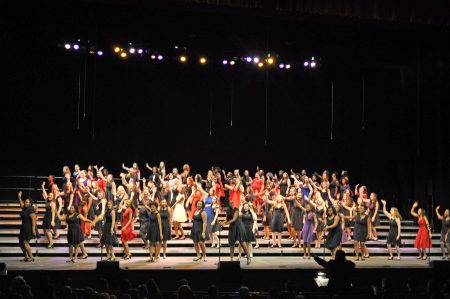 Varyssa Henderson (fifth from right), sings a solo in Aretha Franklin’s “Think.” She is joined by Southern School of Energy and Sustainability senior, Kioka Blake (fourth from left, in red) and Chelsea Rose (fifth from left), who also had solo verses. “It’s a great experience, and it gets you out of your comfort zone,” Blake said. “I think everybody should do it.” (Staff photo by Natasha Townsend)

Associate Producer Terry Summers Hall opened the show by asking the audience to close their eyes and imagine a magical world with amazing music. The students delivered on this image by kicking off the night with a performance of “The Greatest Show.”

“We usually get new students, but we have students that have done this since elementary school, so to see them grow in early grade classes, and now they’re in high school, it’s an amazing thing,” Agerston said.

Students began weekly rehearsals for EOE Jan. 7, until the week before the performance, during which they practiced for four nights and at DPAC the day of, Summers Hall said. The first few weeks, the chorus teachers helped the students learn the songs and work separately with soprano, alto, tenor and bass voices. In the last weeks of rehearsing, a vocal clinician came to help blend everyone’s voices together, Agerston said.

The students performed in front of a near full house theater with ticket prices starting at $12.50.

Veteran performer Chelsea Rose, a 16-year-old sophomore at Durham School of the Arts, has grown through the program. She began performing in fifth grade. For her fifth year in the program  she sang a solo in Aretha Franklin’s “Think.” Musical theater was her first love, she said.

“It was so much fun being able to be an 11-year-old in DPAC and being on the stage with your friends and sing and dance,” Rose said.

But there’s more to the program than meets the eye. The proceeds go toward scholarships for college-bound Durham high school seniors. Last year’s performance provided 23 students with scholarships.

Khamryn McEachin is a recipient of one of those scholarships. The 18-year-old UNC-Chapel Hill freshman graduated from Hillside High School. His scholarship gave him $1,000 to buy textbooks, he said.

He remembers finding out he won the scholarship while listening to a voicemail from his school principal, he said. The soon-to-be graduate had applied to many other scholarships, and when he heard the voicemail, he and his mom replayed the message a few times.

“When the scholarship came out, I had just found out about UNC, so it felt like it was meant to be,” McEachin said.

Agerston said the program also teaches students how to practice, collaborate and be a part of a large production.

The high school boys performed “I’m Still Standing” by Elton John. Donovan Yoshida, 17, front and center, is a senior at Northern High School and has been performing at EOE since fourth grade. This year, he had a solo verse during the song “I Lived” by OneRepublic. (Staff photo by Natasha Townsend)

“I think that’s the way we serve the community, with the students we have right here, and hopefully inspire the next generation,” Agerston said.

Every year on the night of the performance, she sees some of the students she performed with in years past. Her memories of performing with her friends flood back, and she feels more connected to the school system and community she grew up in. “It’s powerful,” she said.

“For the kids to come together and meet students from other schools who love music just as much as they do, that really feeds my soul,” she said.

The songs performed by the high school girls are Agerston’s favorite year after year.

“They have an Aretha Franklin tribute that the community should watch out for, it’s going to be amazing,” she said the night before the show.

The students proved her right. Varyssa Henderson, 17, from Riverside High School, belted out a solo in Franklin’s “Think” alongside other high school girls, including Chelsea Rose, 16, and Kioka Blake, 17.

For Henderson, this year marks her last performance with EOE. She will be graduating this spring from Riverside High School after performing in EOE since fourth grade.

“I don’t really get nervous about it because it’s nothing to be nervous about, it’s really just like an exciting rush,” Henderson said. “I don’t know how else to describe it, I love it.”

Henderson said she is applying for an EOE scholarship this year. In 2016, her sister won a scholarship and now attends North Carolina A&T State University.

“It’s going to be a struggle for my mom to have to go through it by herself, so winning the scholarship, no matter how much money, would just be such a blessing,” Henderson said. “It will make me cry.”

If Henderson wins the scholarship, she hopes to pursue musical theater in college and beyond.

Although this is the last performance for the graduating seniors, teachers and students alike will always have a strong connection to EOE.

“When we start singing, there’s nothing else like it,” Henderson said. “It’s not like I’m singing here at Riverside you know, it’s like taking a small portion of my family and adding hundreds to it.”