Brandon Willingham, acting as Matthew Henson, one of the first explorers to travel to the North Pole. Here he teaches Julien McGill, 3 1/2, about fishing. (Staff photo by Will Shropshire)

Children skipped up the steps in excitement on their way to the second annual “Meet the Heroes” event at New Creation United Methodist Church in Durham. The event celebrated six prominent figures from black history through interactive activities.

For Albert Shuler, the pastor of New Creation United Methodist Church, the focus on children was particularly important. 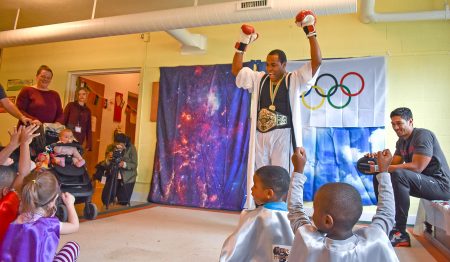 Rashid Beyah, portraying legendary boxer Muhammad Ali, leads the children in chanting, “I am the greatest.” (Staff photo by Will Shropshire)

“Being an African-American and remembering those heroes I’ve looked to all my life has a very special meaning for our children, and for them to not have an opportunity such as this would really be remiss,” he said.

“I think it’s an inspiration to hear someone’s story that resembles you, and resembles where you come from, and you can find that they’ve overcome and achieved beyond what was expected,” said Jermaine McGill, an administrative council member at New Creation and the creator of the “Meet the Heroes” event.

“I just want to see the youth get something out of it to find some inspiration,” he said. 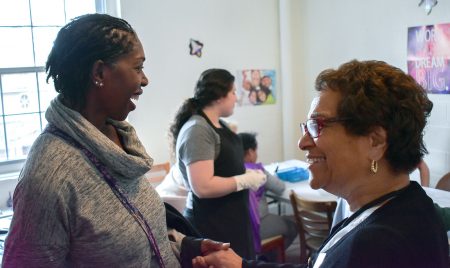 “This is the best thing I’ve ever seen,” said Annie Mills (left), who brought here twin boys to the event. “It gives them an opportunity to learn by doing,” said Carolyn Black, a volunteer at the event. (Staff photo by Will Shropshire)

This year’s “Meet the Heroes” event did have a few changes from the previous year. To improve navigation, the church placed footprints on the floors leading to the activity rooms. After following the footsteps to the top of the stairs, volunteers greeted children and parents before directing them to the heroes’ separate rooms.

“I can just see the enthusiasm of the volunteers and the participants and those who are coming – they’re just excited, and they will be learning by doing, and I just think that’s great,” she said.

In Katherine Johnson’s room, children coded their own small robots using colored markers, and magnetically painted their own galaxies. The children looked at the moving robots in awe, examining the different colored lights as they moved.

In the next room, “Mahalia Jackson” portrayed by Lynette Barber, welcomed the heroes one at a time, introducing their stories and encouraging the children circled around her.

“You make sure you stay in school, do really well in school, and then you go for anything in life you want to go for, don’t let anybody tell you any different,” said Barber.

She ended each visit with a gospel song appropriate to the hero’s accomplishments. 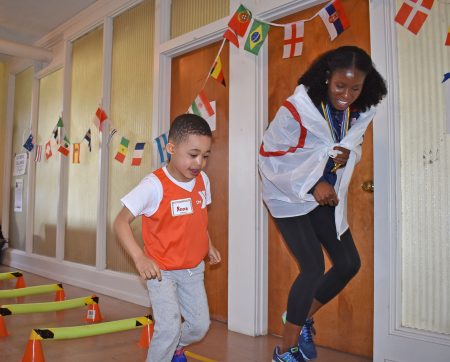 In Matthew Henson and Charles Drew’s shared room, some children used a virtual reality headset to experience virtual skiing while other participants decorated a compass watch and made blood system slime. As children entered the room, Brandon Willingham, who portrayed Matthew Henson, crouched down at eye level to the kids and re-told Henson’s heroic story, deepening his voice each time.

An instrumental played on repeat in the background, adding suspense to Willingham’s stories.

In the corner of the room, Willingham encouraged children to put Henson’s wisdom to action by fishing from a bucket. In between stories, Willingham was greeted by hugs from adoring children.

On the other side of the room, Dr. Drew, portrayed by James Sanders, used slime to talk about Dr. Drew’s achievements with blood.

Annie Mills, a parent who attended the event, said Dr. Drew’s character appealed to her. 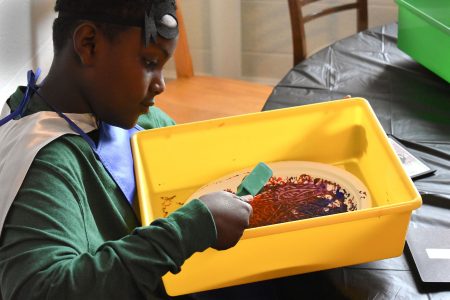 In one room, attendees learned about science and math. Here, Aaron Mills, 12, paints a galaxy. (Staff photo by Will Shropshire)

“Wilma Rudolph” and “Muhammad Ali” co-hosted the last room, called the Olympic room. It included an obstacle course and a boxing challenge. For Aaron and Aiden Mills, these were their favorite activities of the day. After trying out the course and completing the challenge, children grabbed shaved ice and snacks with their parents before running through the course and stepping up for the boxing challenge again.

Children left the event with smiles on their faces, some with their hands still clutching their cups of shaved ice. Outside along the railings of the church, Sanders stood with his hands rested neatly in his pockets while still clothed in his white doctor’s coat and pants. His red stethoscope dangled from his neck, moving in rhythm with his pacing.

For Sanders, the opportunity to mix historical knowledge and encouragement made his participation in the event worthwhile.

Sanders’ love of history started decades before “Meet The Heroes.”

“I wanted to become a certified public accountant, but once I went down to Central, in the history department, I never strayed,” he said. Sanders taught for 33 years on both the high school and collegiate levels. 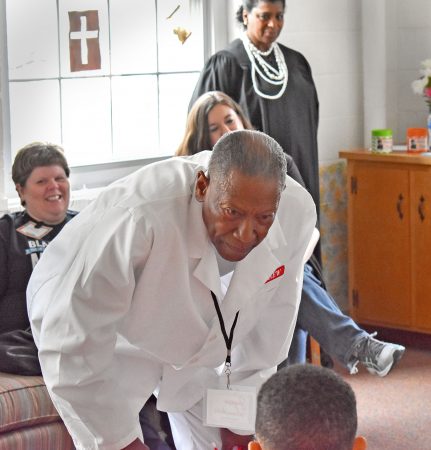 “Things aren’t always gonna be good, but I want you to remember one thing: don’t ever give up,” said James Sanders acting as Dr. Charles Drew a pioneer in blood research in medicine. (Staff photo by Will Shropshire)

After spending 45 years away from Durham, he said the event was an opportunity to reconnect with both Durham and his passion for education.

“That’s why you see a twinkle in my eye, the enthusiasm and the effervescence of being able to interact,” he said.

For Sanders, understanding the struggle and contributions of the heroes helped children think about the journeys of their own lives and better understand who they are and who they could be.

Below Sanders, there was a sign tied to the railings. “Meet the Heroes” and “Free to the Public” were in bold letters. A faint breeze moved the red and blue balloons tied to the sign.

As children left the event, they still recognized Sanders as one of their heroes from black history.

“Bye, Dr. Drew!” a child called out to him, walking hand-in-hand with one of his parents. “Bye now,” Sanders said, before returning inside to give another group of children a lesson in black history.

Courtney Staton, a UNC-Chapel Hill senior majoring in psychology and Journalism (photo and video) is a Greenville native serving this semester as co-editor of the Durham VOICE.