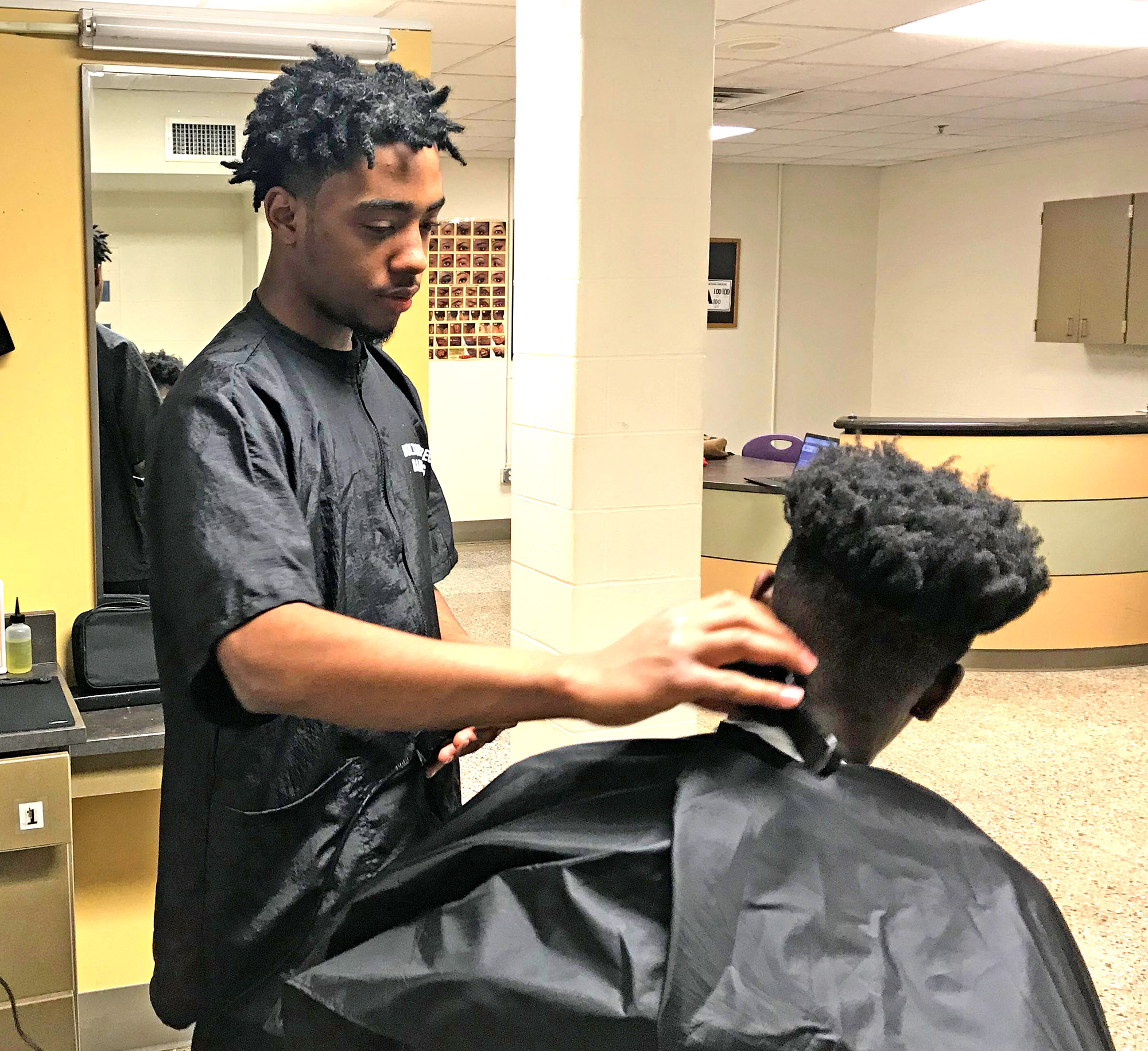 V’Aondre Mack, 16, always loved being in a barbershop. Now, the Holton Career and Resource Center is giving him the opportunity to work in one someday.

“I’ve always been in a barbershop since I was young,” the Southern High School (SSES)  junior said. “Me, my dad and my little brother went to the barbershop every weekend or two to get our hair done. I always liked the atmosphere.”

(Editor’s note: Mack is a junior at Southern School of Energy and Sustainability. In an earlier version of this story, the VOICE stated incorrectly that Mack is a student at Hillside High School.   The VOICE regrets the error.)

Mack is a student in the Holton Career & Resource Center’s barbering program.  He and his classmates are hard at work mastering skills that will carry them into the next chapter of their lives.

Additionally, Mack is a student participant in Partners for Youth Opportunity, a community partner of the Durham VOICE.

The barbering program is designed for 11th-graders to complete by the time they graduate high school. Students travel to the center every day and attend the class as they would for any of their core classes. During the two-year-long program, students are able to work toward and complete their 1,528 required hours of instruction, while also getting to practice on real clients. 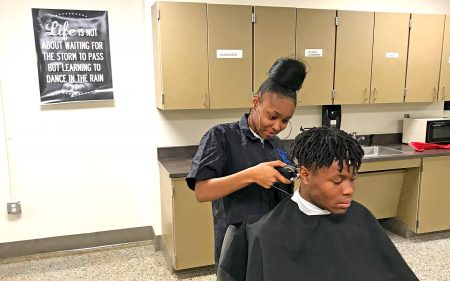 Talia Sidberry demonstrates how to produce a fade on her classmate Demitri Pickens. (Staff photo by Elisabeth Beauchamp)

Mack chose to enroll in the barbering program in case he finds himself needing a job right out of high school. He and his classmates clock in every day and get to work with real clients almost as soon as they enter the class. After completing the courses in high school, the students test for their preliminary licenses and work as apprentices. Once they complete their apprenticeship, students can become licensed barbers. Mack explained that the program is teaching him and his fellow classmates more than just tapers, shaves and fades.

“We learn more than just cutting hair,” he said. “We’re basically building ourselves up so that if somebody comes in and wants to know this about their hair, we can tell them instead of them having to go somewhere else.”

Along with acquiring barbering skills, the students learn how to build and run a business. Mack appreciates that the Holton Career & Resource Center provides students with such skills while also working to help the surrounding community.

Ryan Holeman, a Durham native and 16-year-old Hillside High School student, learned about the barbering program at the Holton Career & Resource Center when his sister took the class.

“Seeing my sister cut hair made me want to start barbering,” Holeman said. “When I used to see her cut hair, I would think, ‘That’s fire.’ Like, I always wanted a fresh cut.”

Holeman sees barbering as a steppingstone to accomplish his career goals. No matter what he ends up doing, though, Holeman says he wants to continue barbering on the side.

“I like cutting hair and getting people right,” he said. “I like helping other people. Even though they are paying you, you’re still helping them out. It’s like customer service in a way.”

Holeman noted the importance of working with real clients.

“The way to practice is to keep cutting hair,” he said. “You can practice on a mannequin, but they aren’t going to grow their hair back, so you’ve got to keep practicing on people.”

Holeman’s first client was his godbrother, which he said was less stressful because he was working with a family member who trusted him.

“You’ve really got to be focused when you’re doing this, because after you mess it up, there’s no going back — and this is a human you’re dealing with,” he said.

Holeman is thankful that the Holton Career & Resource Center is able to give professional guidance to students on an individual level. The program has small class sizes, which allows each student to have their own haircutting station and grants the instructor time to offer personalized advice to each student.

Talia Sidberry, a 17-year-old from Durham, also attends the Holton Career & Resource Center and is one of three female students in the class.

Editor’s Note: in an earlier version of this story, the VOICE incorrectly reported that Sidberry was the only female student in the barbering class. The VOICE regrets the error.)

Deciding to take the barbering course was an easy choice for Sidberry since she has always enjoyed styling hair.

“I love doing hair and have done it since I was 6,” Sidberry said. “A lot of guys don’t see a lot of girls cutting hair, so it was kind of an interesting thing for me to do.”

According to Sidberry, cosmetology and barbering are really quite similar. In both professions, she said, students learn about blades, clippers, trimmers and shears, as well as how to comb, curl and dye hair. 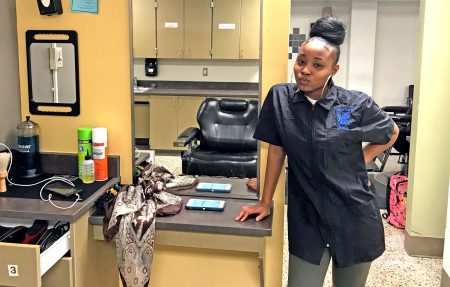 Talia Sidberry, is not afraid to show her personality and confidence in the salon.  (Staff photo by Elisabeth Beauchamp)

Like Holeman, Sidberry does not plan to make barbering the end goal of her career. She wants to use her skills as a barber to earn money in college and on the side as she works her way up to becoming an ultrasound technician. For now, Sidberry is glad to be able to study in a non-conventional classroom setting as a barbering student.

“I would rather be in here than in my core classes because it’s fun and you get to move around, be you, meet new people and cut hair,” she said.

Mario Little, a barber from Mount Gilead, a small town an hour east of Charlotte, teaches both barbering classes at the Holton Career & Resource Center. Little began learning about barbering when he entered a barbershop for the first time at 13 years old. He draws inspiration from his childhood barber.

“My barber was probably the coolest guy I’ve ever met,” he said. “That’s what stimulated me to want to become a barber, and I pursued that career when I was 19.”

Little has taught the craft since 2012. He owns his own business called Perfect 7 Discount Barber Shop in Durham and decided to start teaching after becoming displeased with the quality of barbers he saw in the industry. Little says he figured the best way to make sure that quality was in the product being pushed out was to start teaching and influencing young barbers entering the field.

According to Little, the mission of the Holton Career & Resource Center is to provide students with new skills that give them career opportunities immediately after high school graduation. He also notes the students are able to receive this education for free instead of paying barbering school tuition, which can cost up to $11,000.

“The Holton Center is really a hidden gem in this community,” Little said. “The barbering program here is unique because it’s one of only two in the state of North Carolina where our students come in and in two years have enough hours to become licensed barbers when they graduate high school.”

The Holton Career & Resource Center barbering class offers $3 haircuts for children and senior citizens and $5 haircuts for adults. The class members are available to cut hair from 8 to 11:30 a.m., Monday through Friday. Little hopes to extend the shop’s hours by next school year. Check out the center’s website for more information on the class and barbershop hours.